Shakespeare Theatre Company’s annual Mock Trial—“the funniest, most entertaining event in Washington” (Roll Call) and “a Washington wonk’s dream (The New York Times)—will be in session virtually March 11, at 7:30 p.m. ET. Audiences will hear a mock appellate argument before a panel of judges, based on a legal issue arising out of a reimagined plot point of The Winter’s Tale. Viewers will even be able to cast their own judgment before the panel renders their verdict.

Shakespeare’s The Winter’s Tale has more royal scandals than four seasons of The Crown: accusations of adultery, jealous spouses, feigned deaths, a potential war with former allies, a hungry bear, and a statue brought to life. 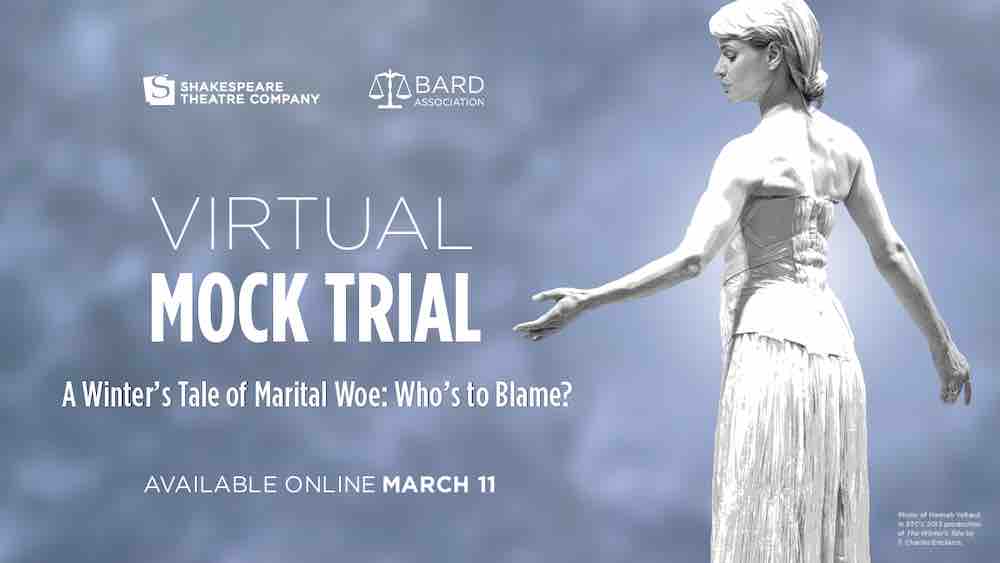 Focusing on the royal rift between King Leontes and Queen Hermione of Sicily, this year’s Mock Trial scenario, A Winter’s Tale of Marital Woe: Who’s to Blame?, finds the Queen’s frenemy Paulina paying out of pocket after keeping the monarchs separated for 16 years. Paulina will appeal the decision of the court, claiming piety for Apollo caused her to imprison the Queen and offer her alternative facts about the state of the royal marriage.

United States Supreme Court Justice Stephen G. Breyer will preside over the panel of judges, including Judge Jennifer Walker Elrod, United States Court of Appeals for the Fifth Circuit, Makan Delrahim, Former Assistant Attorney General for the Antitrust Division, Judge Amit P. Mehta, United States District Court for the District of Columbia, and Andrew Weissmann, Jenner & Block LLP, Former General Counsel of the Federal Bureau of Investigation, will serve as the Advocates for the Trial. Pamela Talkin, former Marshal of the United States Supreme Court and the first woman to hold this position, will serve as the Marshal. Abbe Lowell, Winston & Strawn LLP, one of the nation’s leading white-collar defense and trial lawyers and a longtime member of Shakespeare Theatre Company’s Board of Trustees, will moderate. More participants will be announced.

Tickets to watch the Virtual Mock Trial are $30; free for current students. To RSVP click here.

ABOUT THE MOCK TRIAL SERIES

Since 1994, the Shakespeare Theatre Company has hosted a Mock Trial based on a Shakespeare play. The fictional court case poses a legal question, or questions, and the audience must act as the jury to decide the fate of the characters. The Trial examines the links between classic works and contemporary legal theory in a way that is both thought-provoking and entertaining.