On Tuesday, March 9, Dress Circle Publishing (founded by Broadway producers Brisa Trinchero and Roberta Pereira in 2011, and the only publishing company dedicated solely to producing books with Broadway themes by members of the Broadway community) will release The Untold Stories of Broadway, Volume 4, the latest in the ongoing multi-volume series by theater historian and producer Jennifer Ashley Tepper. The new tome, featuring interviews with more than 200 industry professionals (30 of which are all-new), recounts both facts and anecdotes about the Imperial, Jacobs, Studio 54, Minskoff, Friedman, and Golden, as well as the five Broadway theaters (the Morosco, Bijou, Helen Hayes, Astor, and Gaiety) that were destroyed in 1982, changing the course of New York City history. Tonight, Monday, March 8, at 6:30 pm, Tepper joins Off-Broadway’s Keen Company for an in-depth discussion of her work, in the free online series Keen After Hours.

Tepper, who received a 2020 Lincoln Center Emerging Artist Award, is the Creative and Programming Director at Feinstein’s/54 Below, where she has curated or produced over 3,000 shows. In addition, she produced the musicals Be More Chill, Broadway Bounty Hunter, and Love in Hate Nation as part of her decade-long collaboration with Joe Iconis & Family, along with working on such well-known Broadway productions as [title of show] and The Parisian Woman, and the acclaimed Off-Broadway revival of Smokey Joe’s Cafe, among others. She is also the conceiver and director of The Jonathan Larson Project and historian consultant on the upcoming movie version of Larson’s tick, tick… BOOM!.

“During this time of great adversity for the theater industry,” said Tepper, “when we’ve been shut down for an entire year, we wanted to create and share a new book that reveals Broadway’s essential nature and how special the theater community is. Theater people have always come together and persevered through tough times, and many of the stories in The Untold Stories of Broadway, Volume 4, shine a light on this moment we’re now living through, from a historic perspective.” 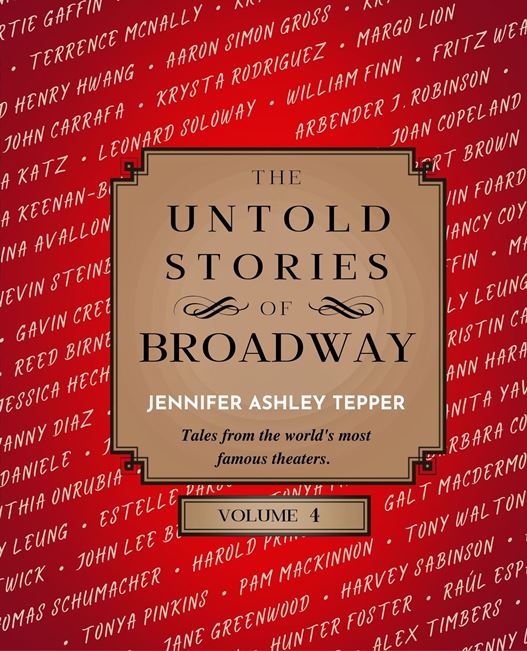 Some of the questions addressed in the exhaustively researched and exuberantly detailed book are: how did shows like Fiddler on the Roof, Falsettos, A Raisin in the Sun, and Hair fight for social justice through art; who are the groundbreaking artists whose names have been forgotten but should be remembered; what are the funniest bloopers from Les Misérables and the craziest legends from Studio 54’s days as a nightclub; in what ways did American politics affect theater in the last century, from the Federal Theatre Project to satirizing presidents on stage; and how has Broadway made it through tough times and remained the heart of NYC through it all?

A portion of the book’s proceeds will benefit The Broadway Advocacy Coalition, a multidisciplinary organization founded by members of the Broadway community in 2016, as a direct response to the nation’s pandemic of racism and police brutality, through uniting artists, legal experts, and community leaders to create lasting impact on policy issues from criminal justice reform to education equity to immigration. 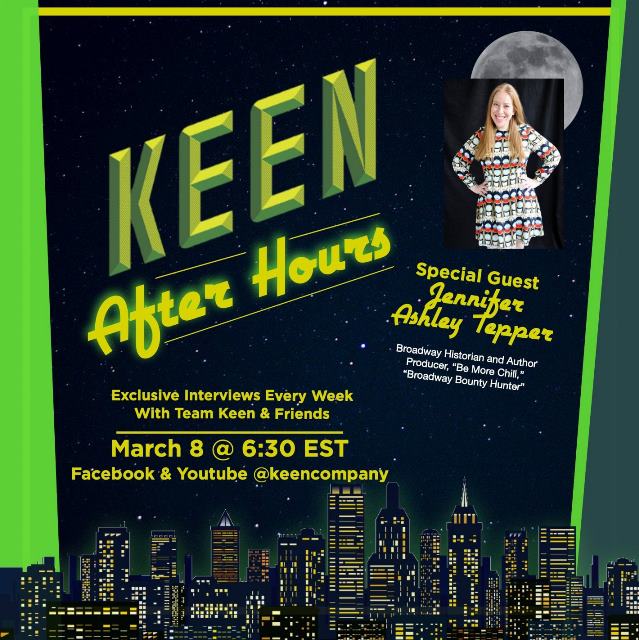 Keen After Hours with Jennifer Ashley Tepper streams on Monday, March 8, 6:30 pm, on the Keen Company website. Viewing is free, and the interview (along with all past episodes of the series) will be available on Keen’s Facebook page and YouTube channel after the live premiere.