In Silence Is Violence: The Future of the Field—the latest installment of Young Playwrights’ Theater’s (YPT) social justice performance series—three Black characters in the early stages of their careers in theater must grapple with racism, tokenism, and ethics while collaborating on a theater project commissioned by a white-led theater company. The devised three-part web series was written and performed by three gifted young Black theater artists.

The web series speaks to the moment of introspection that many theaters are experiencing as they work toward developing anti-racist and anti-oppressive cultures backstage, onstage, and in the audience. It also introduces the much-needed point of view of young Black artists who are just beginning their journey in the industry.

In the fall of 2020, YPT Artistic Director Farah Lawal Harris put out a call to students of Howard University’s Department of Theatre Arts to audition and submit writing samples to be part of YPT’s Silence Is Violence 2021 project. Howard theater students Autumn Angelettie, Ayanna Fowler, and Jaucqir LaFond answered the call and hit the ground running in a devising process from which they have crafted a narrative to be told over the course of three short episodes.

“The cornerstone of YPT’s Silence Is Violence series is the voices of our youth front and center,” said Harris. “In producing this year’s Silence Is Violence, we wanted to make sure that Ayanna, Autumn, and Jaucqir had the support they needed to really take ownership of this project and the message they want to share with the world.”

The production was filmed virtually over weeks of intentional direction by Harris, carefully crafted editing by Anthony Amos, and sound design by Kevin Alexander.

“More than anything, I hope that this [production] encourages the audience to not only begin a dialogue about the topics discussed but to also spend some time conducting internal analysis about their own relationship to everyday oppression in marginalized communities,” said Jaucqir LaFond.

To learn more about the project’s collaborators, visit the YPT website. YPT is currently accepting donations in support of this project and YPT’s larger mission to inspire young people to realize the power of their own voices. Supporters can reserve tickets and make donations here. 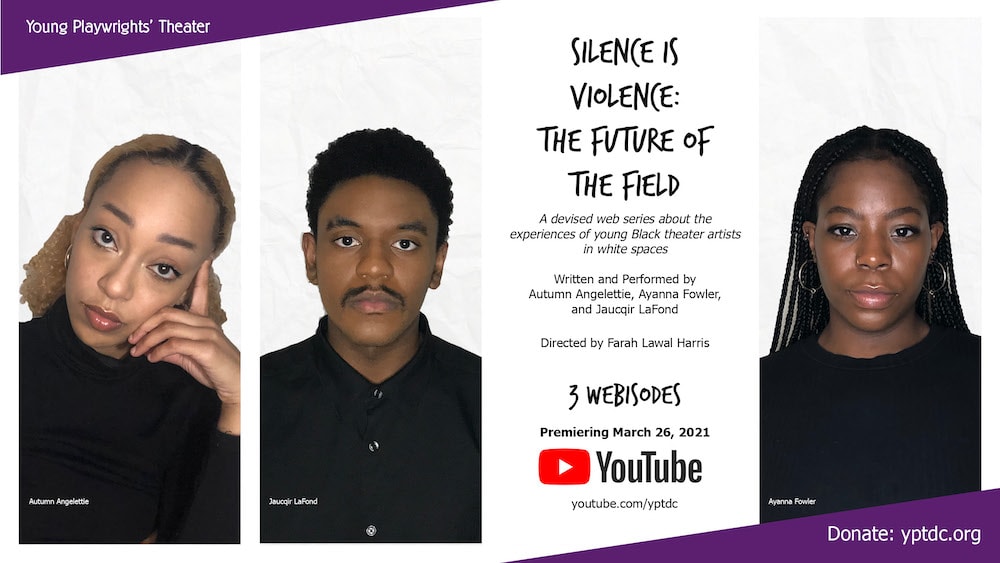 About Silence Is Violence

Since its inception in 2015, Silence Is Violence has been YPT’s most immediate and direct route of addressing social justice issues affecting DC-area youth through performance and community dialogue.

Each Silence Is Violence performance centers the voices of our young people and the issues that affect them the most. The series has addressed issues of police brutality and the resulting murders of Black people at the hands of police, immigration policies that abuse the rights of and negatively affect the lives of immigrants and naturalized citizens, LGBTQ+ stories, culture and pride, urban environmentalism, gentrification, and the experiences of displaced young, Black mothers.

Silence Is Violence serves as a means for young people to actively communicate their concerns through targeted dramatic writing workshops and community partnerships. With these young people’s permission, YPT shapes their words into a theatrical production featuring professional performers, furthering YPT’s vision that young people’s voices are not only significant but also powerful.

Young Playwrights’ Theater (YPT) inspires young people to realize the power of their own voices.

YPT believes that creative expression and theater are valuable tools for the education, enrichment, and self-actualization of young people. Through our programs and productions, we fulfill their creative vision by hiring professional artists to guide and perform original youth-generated work for their peers and for the public.

YPT believes that it is important that youth, especially those whose voices are often minimized, have access to high-quality arts education that centers their experience and is culturally competent and affirming for all young people involved. In order to do this work, YPT acknowledges oppression and reduces its harm through our internal and external structures and practices.

YPT believes that young people are inherently brilliant, and we exist to share that brilliance with the world.

SEE ALSO:
Post-Play Palaver: ‘Silence Is Violence: Whose Earth Is This, DC?’ at Young Playwrights’ Theater by John Stoltenberg and Sherrita Wilkins