Shaun and Abigail Bengson met in New York City at a party and after talking, decided to start a band together. Their first rehearsal turned into their first date, and three weeks later, they were married!

That was 13 years ago, and today, the dynamic duo composes and performs together around the world.

“We wrote our first song together on that first night,” Abigal said. “Writing music together has been a profound way that we learn about each other, and what we think about the world, and how we think about ourselves. It’s become a language we speak together.”

In 2017, the couple’s Off-Broadway theatrical concert, Hundred Days, toured across the U.S. and was a big hit. The story looks at embracing uncertainty, taking a leap, and loving as if you only had a hundred days to live.

A trio of the indie-folk duo’s songs have also been featured on So You Think You Can Dance, and one of their most recent singles, “The Keep Going Song,” has been viewed more than 4 million times on social media.

So it was no surprise when Arena Stage reached out to the Bengsons to take part in the theater’s three part-commissioned music series, Arena Riffs.

“The incredible Molly Smith [Arena Stage artistic director] reached out to us and said we could create whatever we wanted,” Abigail said. “That changed a few times as our lives changed, as she ran with us as things kept evolving.”

For their part, the Bengsons composed a new memoir musical titled My Joy Is Heavy!, which is currently streaming on Arena’s website for free.

“We filmed it at my mom’s, in the house I grew up in, which is where we have been staying for the past six months,” Abigail said. “We made the whole piece on our cell phones, filming each other and things that were going on.”

In the 27-minute piece, the Bengsons present an intimate portrait of celebrating joy during difficult times, which for the couple included dealing with chronic pain and suffering a miscarriage during the COVID-19 lockdown.

“Our memoir pieces need to reflect what’s going on in our own hearts and bodies as we process the world,” Abigail said. “At first, we were thinking about one thing—living with chronic pain and mental illness, and how that affects the ability to cultivate pleasure and joy. Then I got pregnant, so we started to feel our way into that being part of the piece. When I had a miscarriage, that shaped what we were going through, and this became a healing practice for us to make this together.”

The Bengsons display the pleasures, joys and the emotional tolls of the events of the past year and how they managed to cultivate and hold onto happiness even during these dark, difficult times.

My Joy Is Heavy! includes seven songs, with each functioning in a different way. 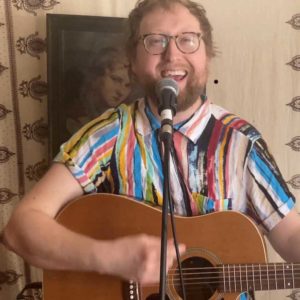 So by bringing viewers into their home—warts and all—they will see the dirty dishes in the background as the Bengsons sing and dance together, providing that real intimacy.

Before the pandemic hit, the couple were working on the music for a play at the Actors Theatre of Louisville, and after one performance, the country shut down. The Bengsons drove to Dayton, Ohio, to stay with Shaun’s parents, and they put together an hour-long concert for the Louisville theater. That’s where “The Keep Going Song” evolved from.

“It’s been incredible that we’ve gotten to work through the year, and how this song has gone viral,” Shaun said. “This year has really been about connection, and we have connected to people all over the world in a very real and humbling way.”

My Joy Is Heavy! can be accessed on the Arena Stage YouTube channel.