Playwright Angelica Chéri’s mystical and moving play Berta, Berta is next up at Baltimore’s Everyman Theatre. Founder and Artistic Director Vincent M. Lancisi announced that Everyman is set to stream the award-winning play, directed by Reginald L. Douglas, into homes beginning Monday, May 3, through Sunday night, June 13, 2021. Berta, Berta offers a fictional account of the legendary prison song “Berta, Berta,” which originated on Parchman Farm at the Mississippi State Penitentiary. 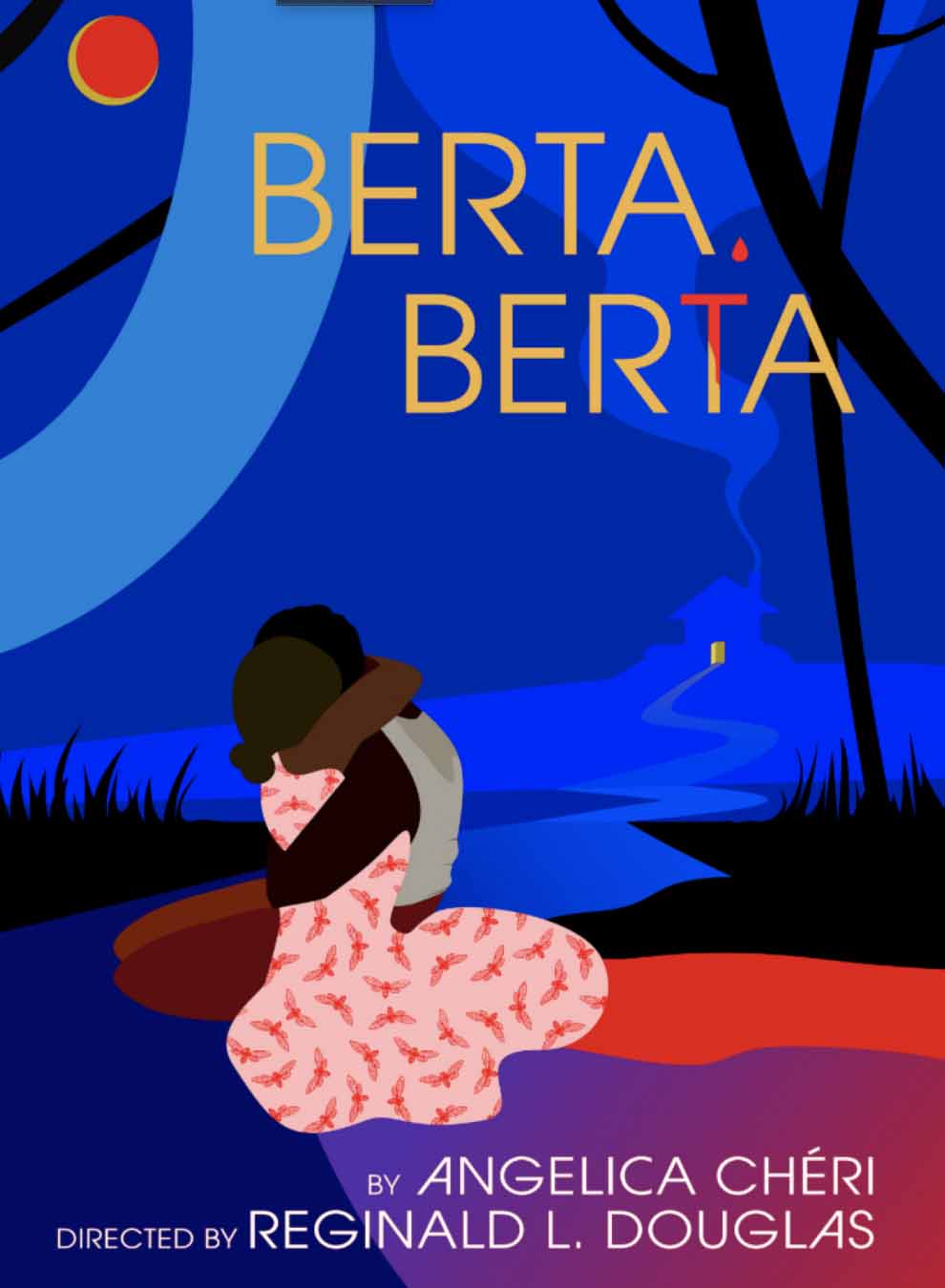 In Chéri’s play, set in 1923 in Meridian, Mississippi, Leroy returns to Berta’s doorstep covered in blood after committing a shocking crime. With his freedom in the balance and the clock ticking to make amends, Leroy and his long-lost lover’s quarrelsome beginning transforms into an impassioned consummation of their love. Can the inevitability of Leroy’s fate be averted? A hit from the 2018 Contemporary American Theatre Festival, this riveting fable weaves an intimate yet epic love story.

“Angelica Chéri has written a red-hot tale of long-lost lovers reuniting for one last chance at love,” says Artistic Director Vincent Lancisi. “Her writing is on fire here and the stakes couldn’t be higher. The performances are also electric; you won’t be able to take your eyes off of these powerful performances. Berta, Berta is truly theater of passion!”

Berta, Berta is the third mainstage production in Everyman’s reimagined 2020/21 season, featuring Myxolydia Tyler in her Everyman Theatre debut. She’s appeared on stage at regional theaters throughout the country, including locally at Signature Theatre and Baltimore Center Stage, as well as McCarter Theatre, St. Louis Rep, and Barrington Stage to name a few. She’s been seen on television in NBC’s Manifest​ and New Amsterdam​ and Showtime’s Homeland. Additionally, Tyler does voiceover work and has contributed as a teaching artist at theaters around the U.S. She is a Hermitage Artists Fellow.

Featured as Leroy is Gabriel Lawrence, who is also making his first Everyman appearance. He is an actor, educator, and filmmaker based in Brooklyn, who has also been seen on stages nationwide. His stage credits include: X; or Betty Shabazz v. Nation and title roles in both Macbeth and Julius Caesar. His television credits include Prodigal Son, The Deuce, Mysteries of Laura, and recurring parts on ABC’s What Would You Do? He also teaches Shakespeare, acting, debate, and filmmaking throughout New York City.

Everyman Theatre Managing Director Marissa LaRose reflects on getting this production on stage: “Berta, Berta is a second-chance story in more ways than one — we returned to rehearse the show almost a year to the day after we paused for the pandemic. To bring such an epic story to life during a year that had all odds stacked against us is a source of both genuine pride and hope as we look to head back to live theater.”

Tickets for Berta, Berta by Angelica Chéri are $30 per household and available online now at everymantheatre.org or by phone at 410.752.2208. This six-week run can be streamed into homes from Monday, May 3, 2021, at noon until Sunday June 13 at midnight. The play is recommended for audiences age 14+.

For additional information on the organization’s COVID safety plan, Frequently Asked Questions about returning to live theater, or other classes and events, call 410.752.2208 or visit everymantheatre.org.

Everyman Theatre is a professional Equity theater company celebrating the actor, with a Resident Company of Artists from the Baltimore/DC area. Founded in 1990 by Vincent M. Lancisi, the theater is dedicated to engaging the audience through a shared experience between actor and audience seeking connection and emotional truth in performance. Everyman is committed to presenting high-quality plays that are affordable and accessible to everyone. The theater strives to engage, inspire and transform artists, audiences, and communities through theater of the highest artistic standards and is committed to embodying the promise of its name, Everyman Theatre. Everyman Theatre is a proud member of the Bromo Tower Arts and Entertainment District, the Market Center Merchants Association and the Greater Baltimore Cultural Alliance. Lancisi partners with Managing Director, Marissa LaRose in leading the organization.

Everyman Theatre stands in solidarity with Black, Indigenous, People of Color, and AAPI communities and is committed to an equitable, diverse, and inclusive atmosphere at every level of our organization. To learn more, read the full statement of solidarity on our website at  https://everymantheatre.org/everyman-theatre-stands-solidarity.