Chekhov is not a feel-good story teller. His plays tell a brutal truth about people: their motivations, their weaknesses, and their duplicity.

The Workhouse Arts Center is currently streaming Chekhov One-Acts Trio, a recorded production including three of Chekhov’s shorter, comedic works: The Proposal, The Harmful Effects of Tobacco, and The Bear.

For the sake of relatability (and Zoom-ability), Director and Adapter Alexander Bulova made adjustments to characters and dialogue. He notes that the works, as written, highlight the battle of the sexes, in all its hypocrisy. Bulova’s intention instead was to focus on the play’s commentaries on human interaction in general:

“None of the characters are able to meaningfully talk about their feelings until all pretenses of politeness have collapsed. Add to this dynamic the conceit of a Zoom call, and the plays are surprisingly relevant to how we’ve felt throughout the pandemic,” he said.

The first one-act, The Proposal, features a quibbling couple literally fighting their way through a marriage proposal. Jolene Vettese plays Stephanie, a mother graciously accepting a request for the had of her daughter, Natalie (Lenny Mendez). Ian (Stephen Kime) is the requestor, a neighbor to the family and childhood friend of his potential betrothed.

But before raptures of love can ensue, Ian and Natalie get into a land dispute and their relationship is dispatched. With frequent and wholly unhelpful interruptions from Stephanie, the trio fluctuates through fury, remorse, disdain, and heart palpitations. All intent on the union but entirely unclear on how anyone will make it out with their sanity.

The Harmful Effects of Tobacco gender flips the single-actor piece. Instead of a husband berating his wife, we have Martha, played by Jennifer Pagnard, guest speaking for her husband’s class.

Giving the virtual students a lecture, including a slide show with bullet points. Martha attempts to stay on topic, only to swerve off into criticisms of her partner’s sleeping habits, brandishing a wine glass and unapologetically unloading her grievances.

In The Bear, Gregory (Jeffrey Menezes) is a businessman collecting on a debt from the widow Elena, played by Adrienne Powell. Elena is determined to be faithful to her husband, even in mourning, and has been holed up in her home alone for the past seven months, despite the pleadings of her assistant, Luna (Danette Illig).

Gregory and Elena argue over the timing of the payment, ignoring his urgency and her desperate need to be left alone. Yet in a weird but hilariously real twist, Elana’s stubbornness and hostility appeals to Gregory and he turns to vying for her affection instead of funds.

The actors recorded their performances live, with Bulova editing the finished product. The result is a fun, if slightly self-deprecating, show with a modern lens on Chekhov’s genius.

The Workhouse Arts Center’s production is well-paced, succinct, and a tickle to the intellectual, sardonic funny bone.

Chekhov One-Acts Trio highlights the faults and often ridiculousness of human behavior and how often a person’s mind can be overrun by their emotions. The plays celebrate raw emotion, hard truths about the difficulty with relationships, and the joys after afternoon drinking. Our Zoom nation, pandemic lives can certainly relate to that.

Workhouse Arts center’s production of Chekhov One-Acts Trio is available for on-demand viewing from April 9 to 18, 2021. Tickets are available online. 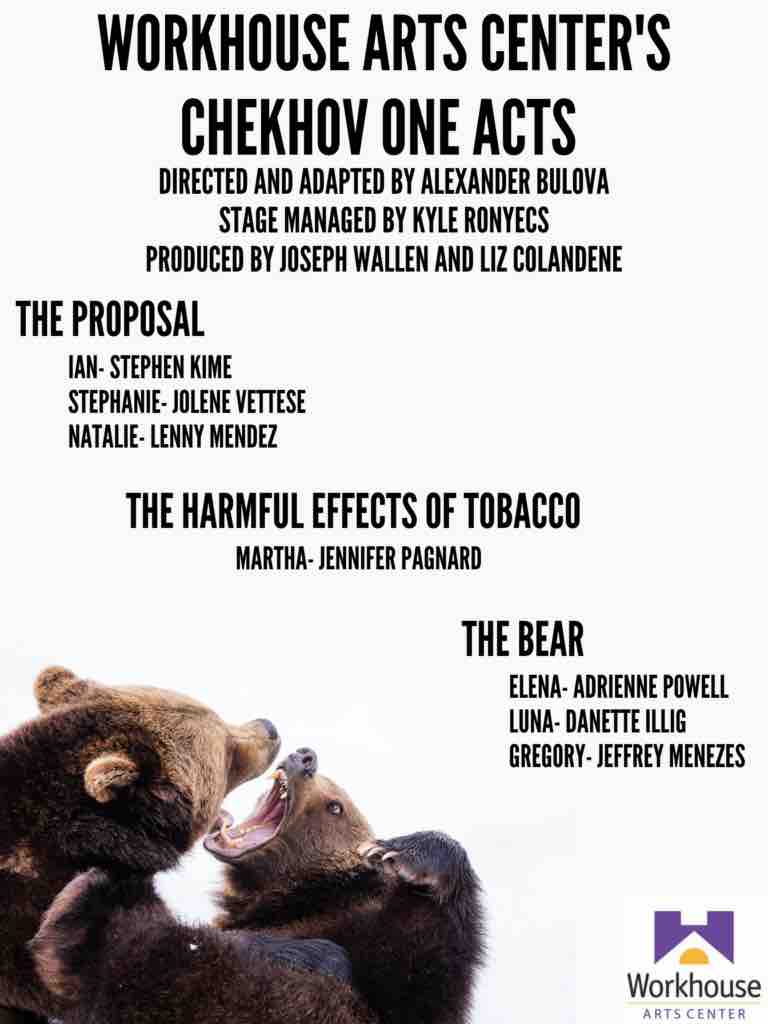