Men behaving badly is a masterplot in life and art as old as time, and Mike Daisey has given it a doozy of a twist. Not ten minutes into his one-night-only monologue Scott and Andy and All the Boys, he poses a jaw-dropping question: “Why not just get rid of men?” For the moment he means it, in all earnestness. “How do we get rid of the men?”

Then with Swiftian wit he pivots to a comic scenario about putting down all men as one would euthanize a dog. Realizing that goofy plan wouldn’t work globally, he invokes a Marvel supervillain named Thanos, renowned for wiping out half of all life with a finger snap. But Thanos does so at random, which for the gendercidal purpose is no use. Getting rid of men, Daisey concedes, would be kind of impractical.

As he says this there is in his voice and face what seems a trace of disappointment.

I was tuning in on YouTube, so I do not know how Daisey’s riff on offing men landed with the folks watching in person at the Kraine Theater in New York. I heard scattered, startled laughter and what seemed stunned silence. I can only surmise that fans familiar with Daisey’s inimitably expressive range as a monologist sensed here the brink of dead-seriousness and hilarity to which he often brings his rapt audiences. It’s disconcerting and unsettling, but in a good way. It’s how he discombobulates us out of our preconceptions.

Still: a man talking with personal passion about hating patriarchy so much he imagines getting rid of it by getting rid of all men. That’s got to be a hot button topic one is not likely to hear in a locker room much less an off-Broadway black box.

The publicity hook for this 80-minute show is two boldface names—the theater and film producer Scott Rudin and the New York State governor Mario Cuomo—whose histories of male-pattern bullying and abuse have recently become widely known. Daisey engrosses us with a damning dossier on each.

Scott Rudin—he of the eye for award-magnet art—has for decades hired a procession of young assistants into a hellscape work environment where he berates them and breaks them and hurls objects to hit and hurt them. In effect they were in training to be victims. Rudin’s reputation as an abuser was no secret in the biz; it was only when Vulture and Hollywood Reporter delivered the receipts—first-person testimony from those he abused—that he was publicly outed as, in Daisey’s words, “an asshole.” Yet industry reaction to the stories, Daisey says, was silence. “When does the American Theater reckon with Scott Rudin?” he asks, galled at the social complicity that enables men in power to throw their weight around.

Andrew Cuomo was for a brief time “America’s Governor,” calming a country with caring counsel as he filled the COVID-info void left by 45 (“a man who was a walking syphilis culture”). Cuomo was finally shining his own light in the shadow of his father, New York State governor Mario Cuomo. But then his reputation unraveled. He was caught sending COVID-infected people back into nursing homes and covering up how many were dying inside. He was exposed by testimony about an office culture where attractive young women hires were made to dress up daily in heels and where Cuomo touched and groped and otherwise sexually harassed them. To this day, Daisy notes, there has been no justice, no accountability, not even a formulaic lame apology such as Rudin’s. Andrew Cuomo is still in power.

“Shitty men are everywhere,” Daisey shares, hardly an original observation. But what Daisey does in this monologue is count himself among them. Genuinely and astonishingly. With a singular sincerity rarely seen.

He does this with a framing story about “a very gendered fight” he had with his girlfriend. It was about something homey and humdrum: sheets. She asked him one day when they were rushing out on a trip if the sheets on their guest bed needed to be washed and he said they were fine. They were not fine and he knew it; they were far from fine. But he said they were fine anyway. When she learned of the lie she was furious (justifiably so, he fully admits).

Daisey devotes a compelling chunk of this monologue to parsing that seemingly minuscule incident. What was he thinking? Why did he think he could get away with it? Why did he do it knowing it was wrong? “I’m still trying to figure out,” he says, “what I thought would happen.”

And in a breathtaking leap of logic he connects this ethical micro to all other shitty men’s ethical macro: knowing something is wrong and doing it anyway.

I want to understand what I was thinking when I said the sheets are fine. Why I thought that would work. I need to be awake enough to not do it again.

Amid all the laughs, there’s a lucid lesson here. With Scott and Andy and All the Boys, Mike Daisey singlehandedly redefines the concept of mansplaining. He strips the practice of its condescension and defensiveness and turns it into a conscientious and humble discipline of self-examination as a man.

Scott and Andy and All the Boys, created and performed by Mike Daisey, was livestreamed May 7, 2021, from the Kraine Theater in New York City produced by FRIGID New York.

To view the video, send $15 via Venmo to @FRIGIDNewYork with the note “Mike Daisey” and your email address, and you will be sent the link. 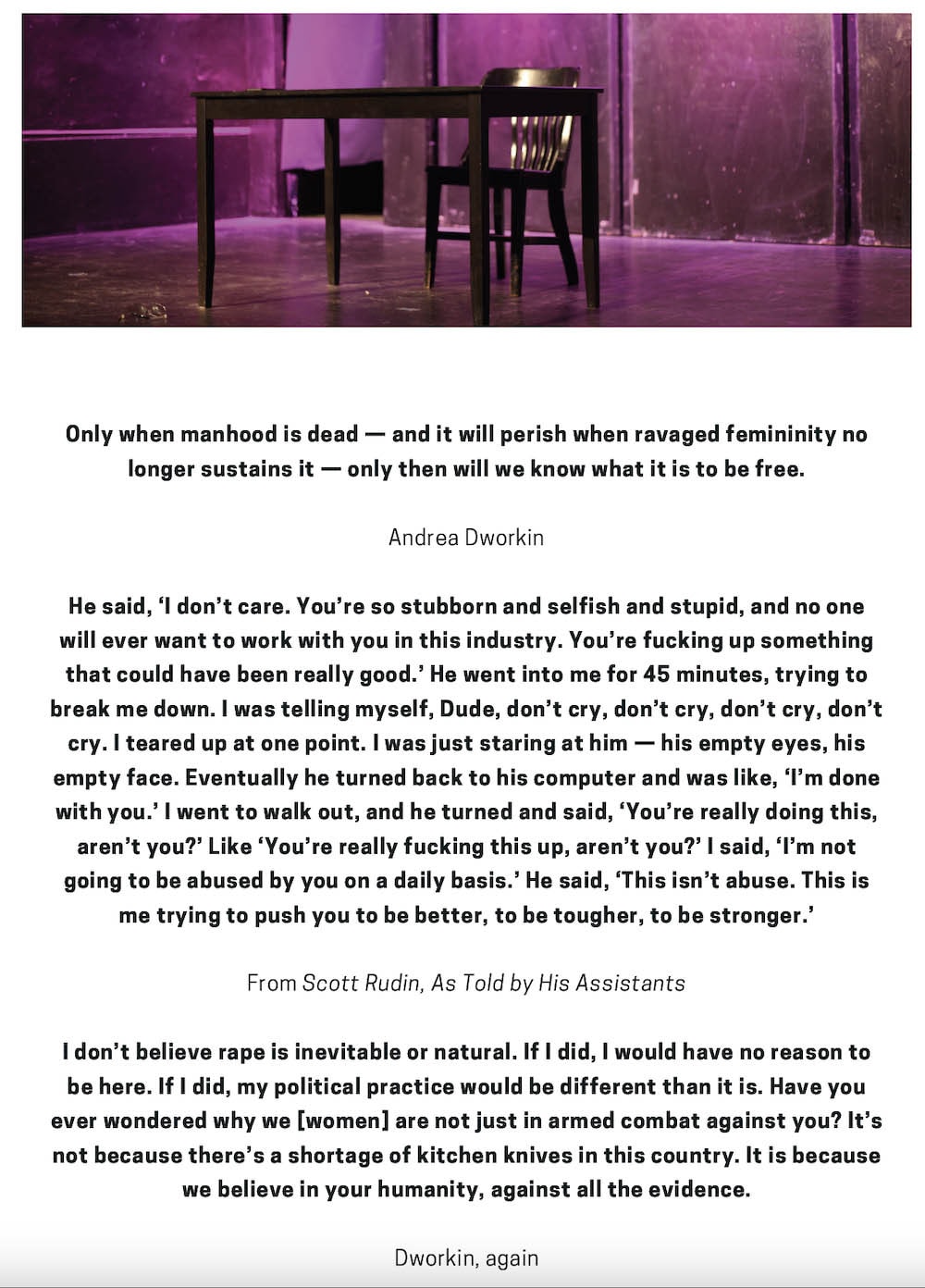