Last week, it was announced that multiple Tony Award-winning actor and playwright Harvey Fierstein, the son of a librarian, donated $2.5 million to The New York Public Library for the Performing Arts at Lincoln Center, which will establish a new dedicated educational space in the building, named in his honor. The Harvey Fierstein Theatre Lab, for students and teachers from middle school through graduate school levels, will allow the Library to make new and innovative use of its extensive theater archives and collections by providing scholarly engagement, curricular and extracurricular experiences for students and teachers, and programming for lifelong learners.

In addition to his generous gift, the star has also named the Library for the Performing Arts a beneficiary of the Harvey Fierstein Trust, which will provide the iconic institution with additional support in the future. And, on the evening of Wednesday, June 23, beginning at 8 pm, as part of the virtual benefit I’m Still Here: A Celebration of the Billy Rose Theatre Division, he will help the Library celebrate that department’s 90th birthday.

The online pay-what-you-can fundraiser, honoring producer/director Harold Prince and playwright/director George C. Wolfe, will offer a rare opportunity to view never-before-seen clips from the Theatre on Film and Tape Archive (TOFT, now celebrating its 50th anniversary), interviews with Broadway legends and emerging creatives, and reconceived performances of classic musical theater show tunes, including Bring in ‘da Noise, Bring in ‘da Funk, In the Heights, The Mountaintop, Ragtime, The Seagull, Spamalot, and Sunset Boulevard. Funds raised by the event will allow the TOFT Archive to capture Broadway and Off-Broadway shows coming out of this historic pandemic shutdown, and to ensure that the Division’s vast collection of historic theatrical negatives are digitized before they erode. 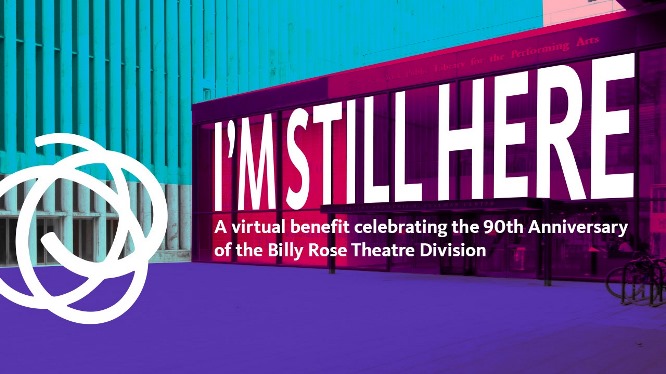 I’m Still Here will stream exclusively on Broadway On Demand on Wednesday, June 23, at 8:00 pm. The virtual event is a benefit, with a suggested donation of $19.31 (the year that the Billy Rose Theatre Division was founded). An in-person viewing party for donors (at the $1000+ level) will start at 6:00 pm, at the Library for the Performing Arts in Lincoln Center, and will include a pre-screening wine and cheese reception and performance by Pulitzer Prize winner Michael R. Jackson (A Strange Loop) and Grammy and two-time Tony Award winner Duncan Sheik (Spring Awakening). For tickets, go online; to send a donation via check, email tickets@stillhereat90.com or call (212) 930-0019.