Waiting Room, a new film highlighting the stories of more than 100 student artists during the pandemic, is now available to stream for free. Created by Arena Stage’s Voices of Now Ensembles, Waiting Room explores how remote learning and social isolation have impacted students and young professionals both physically and mentally over the last year, while also addressing the adjustment of resuming in-person activities and looking ahead to what life may look like after the pandemic.

“Over the past seven years in Voices of Now, I’ve grown so much as an artist and person,” shares Voices of Now artist Zarah King. “Working on a film has been different, yet still an incredible experience. In past years, each ensemble combined many unique stories surrounding different topics into a performance. Through film, however, we’ve decided to focus on the one topic that has been impacting us all — the pandemic.”

Last year, the Voices of Now ensembles premiered their first film, Inside Voices, a moving time capsule that explored the lives of young artists as they navigated the immediate impact of the first few months of the global pandemic as our world began to shut down. The film inspired a partnership between Arena, the Black Coalition Against COVID (BCAC), and Howard University’s WHUT-TV and WHUR radio that allowed the work to be broadcast to audiences across the Washington, DC, metropolitan area.

Waiting Room expands on the exploration of Inside Voices. Student artists document their lives as they navigate the rules of a temporary world while waiting for something better.

“Voices of Now has really been a place of stability for me over the last few years, even in the pandemic,” says Voices of Now artist Reyna Berry. “Waiting Room is a continuation to Inside Voices and working on it when the pandemic finally feels like it might be over soon really brings it all full circle.”

Directed by Ashley Forman and Mauricio Pita, Waiting Room was shot on electronic devices to chronicle the personal experiences of the emerging artists.

“It’s been an honor to experience the events of the past year alongside the Voices of Now community and see how the changes in our world have impacted students, teachers, and artists alike,” explains director of Waiting Room Mauricio Pita. “As events unfolded, artists responded with creativity regardless of technological and spatial limitations. As a result of this experience, it has impacted the way Voices of Now approaches storytelling and artmaking. This flexibility allowed us to embrace a wide range of artistic mediums: animation, film editing, music, composition, visual art, digital art, stop motion, and more, while still remaining faithful to what makes Voices of Now great — autobiographical stories that pose questions with the intent of creating change in our communities.”

Now in their 18th season, Arena Stage’s Voices of Now ensembles, ages 11 to 24, have provided a vital theatrical platform for youth and young people to use their personal experiences to investigate the world around them and pose questions vital to their communities. These two films serve as a theatrical archive for this unprecedented moment in history.

“It is critical that the experiences and feelings of young people are heard and considered. Their stories will allow us to put the systems in place necessary to support their emotional, social, and physical well-being as we all reenter public life,” shares director of Waiting Room Ashley Forman. “I believe it is vital to give young people a seat at the table when making decisions that impact their lives, particularly now, when the rules of social and academic engagement change from week to week. They are experts in their daily experiences and there is no better way to learn what they need than to give them the tools and the platform to express themselves.” 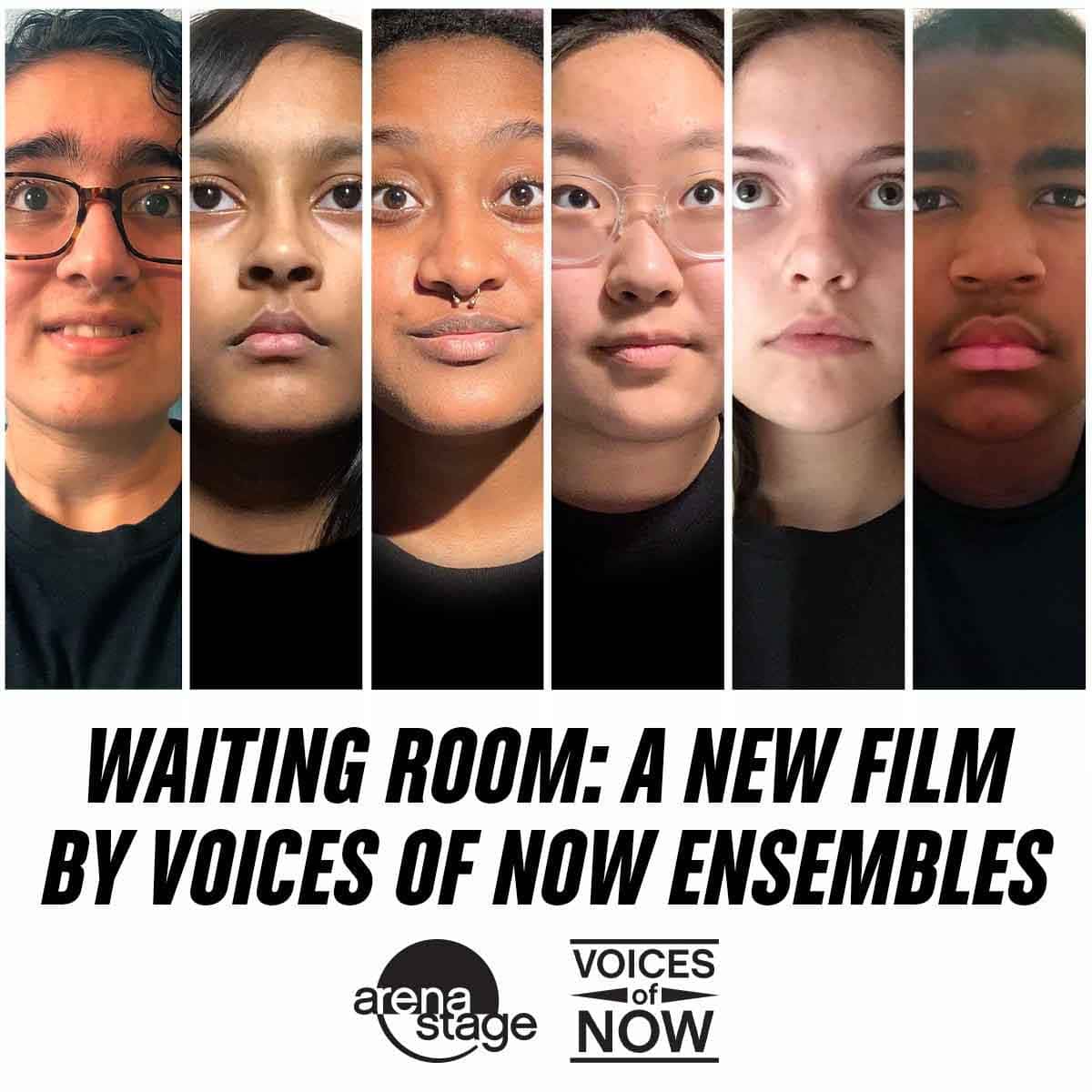 Voices of Now (VON) is a season-long drama program that devises autobiographical plays with ensembles of middle-school, high-school, and adult artists locally and internationally. Voices of Now plays are fast paced, collaboratively written physical theater pieces that pose challenging social questions relevant to the ensemble of artists and their communities. The plays investigate those questions through poetry, movement and the recounting of the artists’ personal stories. One of the primary goals of the Voices of Now program is to create positive change within the artists’ communities by engaging in dialogue centered on the artists’ experiences in their worlds. Voices of Now was designed by Arena Stage’s Director of Education Ashley Forman. In addition to performing at Arena Stage, ensembles perform throughout their own communities. Past ensembles have performed at Atlas Performing Arts Center’s Intersections Festival, Imagination Stage, American Alliance for Theatre and Education’s National Conference, Association of Theatre in Higher Education Conference, 2013 International AIDS Conference and the Kennedy Center’s Millennium Stage.

Ashley Forman is the Director of Education at Arena Stage as well as the Artistic Director of Voices of Now and is in her 18th season at Arena Stage. She is responsible for the design and development of Voices of Now, Arena Stage’s devised theater program. Through a partnership with the U.S. Department of State, Ashley has implemented Voices of Now in India twice (2012 and 2014), Peru (2014), Croatia three times (2013, 2015 and 2019) and Bosnia and Herzegovina (2019). She has presented on her devised theater process at numerous conferences, including the American Alliance for Theater and Education; the Association for Theater in Higher Education Conference; the National Bereavement Camp Conference; and the International AIDS Conference. Ashley has trained university professors and students, cultural attaches, pre-K through high-school public school teachers, teaching artists, professional artists, and young artists. For the past six years, Ashley has served as a visiting artist at Utah State University, where she has devised and directed plays every other year as well as serving as a guest lecturer. She is also on the Board of Directors for American Alliance for Theater and Education where she serves as the National Programming Director. Through Voices of Now she has devised autobiographical plays with numerous populations. Ashley oversees all lesson planning and curriculum for Arena Stage’s education programs. She graduated from Syracuse University with a B.S. in theater, concentration in directing, and a minor in child development.

Mauricio Pita is Arena Stage’s Community Programs Manager where he collaborates with the Director of Education in executing the artistic vision of Arena’s devised theater program Voices of Now (VON). Mauricio managed the online transition of VON from a theater festival to a feature film during the COVID-19 pandemic. He also served as Creative Producer for the 2020-2021 Virtual Season of IN Series. Previously, he was the Director of Education at GALA Hispanic Theater and has worked extensively as a director, educator and performer in Washington, D.C. and New York City, NY. He was part of the artistic team for multiple devised theater productions at Columbia University and is a graduate of the Acting Program at Marymount Manhattan College and the Shakespeare Conservatory for Actors at Yale University.

Arena Stage at the Mead Center for American Theater, under the leadership of Artistic Director Molly Smith and Executive Producer Edgar Dobie, is a national center dedicated to American voices and artists. Arena Stage produces plays of all that is passionate, profound, deep, and dangerous in the American spirit, and presents diverse and ground-breaking work from some of the best artists around the country. Arena Stage is committed to commissioning and developing new plays and impacting the lives of over 10,000 students annually through its work in community engagement. Now in its eighth decade, Arena Stage serves a diverse annual audience of more than 300,000.