Last fall Rorschach Theatre launched Distance Frequencies, an unprecedented project for unprecedented times, sending subscribers on self-guided urban adventures as a story unfolded around them. The story will now conclude live with Distance Frequencies: Transmission, a site-specific show with outdoor, distanced performances July 15 to 31, 2021, on the Great Lawn at The Parks at Walter Reed in Northwest DC.

The live performance can be enjoyed with or without participation in the first seven chapters, in which

an unopened letter from 1935 launches a young artist on a decades-long quest, backward and forward through time. Immersed in back alley love stories, great floods, mysterious voices and a transom of unknown powers, the artist is left with a single question: Where do we go from here?

In Distance Frequencies: Transmission, audiences will explore DC history both real and imagined in an original work of magic realism with a sound track of DC punk and go-go on the palatial Great Lawn at The Parks at Walter Reed, which holds more than a century of history even as its next incarnation takes shape. 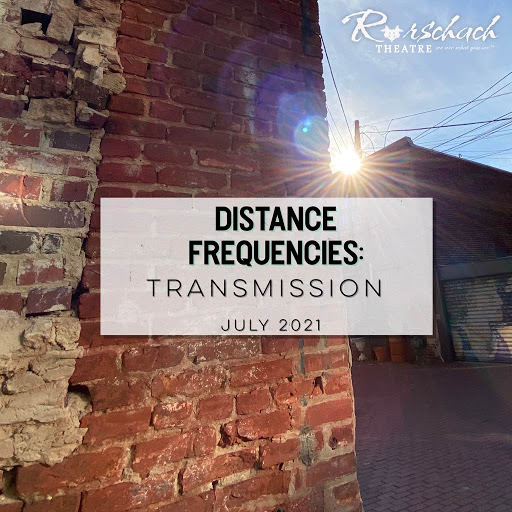 Distance Frequencies: Transmission performs July 15 to 31, 2021, at 8 pm, Wednesdays through Saturdays, on The Great Lawn at The Parks at Walter Reed. Ticket for the live performance are $40 and available online. The full Distance Frequencies experience (all seven chapters plus the live show) can be purchased for $150. Student and senior discounts are also available.

Safety Considerations for the live show:
Rorschach will follow CDC and local guidelines with regard to outdoor masking requirements at the time of the performances. Audiences will have appropriately distanced seating areas throughout the Great Lawn. Hand sanitizer will be available and all Rorschach Theatre staff and artists will be vaccinated. Additional instructions will be sent to ticket holders prior to performances.

ABOUT THE CREATION TEAM

Randy Baker is a playwright, director and the co-Artistic Director of Rorschach Theatre in Washington DC. Recent shows he has directed include Very Still and Hard to See (Five Helen Nominations including Best Director) and She Kills Monsters with Rorschach, and Hello, My Name Is… with The Welders (Three Helen Hayes nominations including Best Director) and a shadow puppet gamelan-inspired A Midsummer Night’s Dream at WSC Avant Bard. Recent plays he has written include the world premieres of Forgotten

Kingdoms and Truth & Beauty Bombs: A Softer World at Rorschach Theatre and workshops and educational productions of The Burning Road (Arena Stage), Monastery (Theater J), and Rashōmon (American University and Spooky Action Theatre). The Legend of Hang Tuah will premiere at Pointless Theatre in 2022 (an adaptation of the Malay Legend with shadow puppets and martial arts). Randy is an adjunct professor at George Washington University and is faculty at The Theatre Lab School of the Dramatic Arts. He received his MFA in creative writing from Goddard College and is the Washington DC regional rep for the Dramatists Guild of America.

Kyle “Kylos” Brannon is an Assistant Professor in the School of Communication at AmericanUniversity and the Associate Division Director for the Film & Media Arts Program. For over a decade, Kylos has performed as a VJ, or live video artist, at clubs, crafting live video mashups for DJs including Moby, MSTRKRFT, Nadastrom, Jesse Tittsworth, and Will Eastman. He’s performed at 930 Club, U Street Music Hall, Ram’s Head Live, The Black Cat, Saturn Birmingham, The Brooklyn Bowl, and others. As a video projection designer, he integrates video projection into stage productions, including 410[gone] , Klecksography 2018, Reykjavik, Annie Jump & the Library of Heaven, and She Kills Monsters. He has created installations and live video performance pieces, including immersive experiences for Little Salon DC, and a month-long solo exhibit titled Forgetting is Normal with the Anacostia Arts Center. He was the co-director for the documentary An Impression: Dischord Records, and the co-producer on the web series Stage Fright, for American University and NBC4. Every Spring, Kylos produces and directs the American Visions Awards, an annual student film awards ceremony held at American University.

Roc Lee is a Helen Hayes Award winning DC based Composer/Sound Designer. He holds a Master of Music in Stage Music Composition from CUA. Roc creates music and sound design for video games, theater, film and podcasts. https://roclee.net Credits include: May 22, 2020, Voices of Now: Inside Voices, Snowchild, The Price, The Year of Magical Thinking, Mother Courage at Arena Stage; Crossing Mnissose at Portland Centerstage; Small Mouth Sounds, Doll House 2 at Roundhouse; Kid Prince and Pablo, The Watsons Go to Birmingham 1963 at Kennedy Center TYA; Fairview, Describe the Night at Woolly Mammoth Theatre; Admissions, Curve of Departure at Studio Theatre; The Lathe of Heaven at Spooky Action Theater; CHARM, Hooded: Or Being Black for Dummies, Ulysses On Bottles, Oh God! at Mosaic Theater; Aubergine, The Importance of Being Earnest at Everyman Theatre; Singin’ In The Rain, Matilda The Musical!, Tiger Style!, The Invisible Hand, On The Town, Aubergine, Annie, Thurgood, Fickle Fancy Farce, Dial M for Murder at Olney Theater Center; AIDA at Constellation Theatre; In This Hope: A Pericles Project; Hello My Name Is… at Welders; [410]Gone at Rorschach Theatre; FAME!; In the Heights at GALA Hispanic Theater.

Jenny McConnell Frederick is a Director, Producer, and strong believer in impossible theatre. She’s the co-Artistic Director of Rorschach Theatre which she founded in the summer of 1999 with Randy Baker. For Rorschach, she has directed more than a dozen shows including the Helen Hayes Nominated Voices Underwater and God of Vengeance as well as both of the sold-out runs of Neil Gaiman’s Neverwhere. In 2015, she conceived and directed Truth & Beauty Bombs, an original work based on the Canadian webcomic, “A Softer World.” She co-created Chambers of the Heart and MOVE!, two immersive dance/theatre projects at Word Dance Theatre. She served as Artistic Director of CulturalDC’s Source Festival and Mead Theatre Lab Program. In that capacity she oversaw the selection, development and production of more than 200 works for the stage over nearly a decade. Work developed and produced by Jenny at the Source Festival boasts multiple National New Play Network Rolling World Premieres, several American Theatre Critics Association Steinberg Award Nominations, and an Osborn Award Winner. Jenny has directed for Theater J, Catholic University and University of Maryland. She’s currently a member of Theatre Washington Advisory Board and has served as a mentor director for the Theatre Lab’s Honors Acting Conservatory and for the Kennedy Center’s American College Theatre Festival and was a featured speaker at the CityWrights Conference in Miami. She graduated cum laude from Virginia Commonwealth University with a BFA in Theatre and joined Mensa for the free pencils. She lives in Takoma, DC with her husband and their long-term collaboration, a son named Thane.

Doug Robinson is a first year MFA playwriting candidate at the Yale School of Drama. He is also a director and a teaching artist. Doug grew up in Northern Virginia and received his BFA from Long Island University. He has spent the last 4 years in D.C. working with a variety of theatre companies such as Imagination Stage, Woolly Mammoth, Theatre Alliance, Ally Theatre, The Hub Theatre, and Adventure Theatre. He first worked with Rorschach Theatre this past summer when his play Ripple was produced at Klecksography 2020. A selection of his plays includes Tree Fort, Pride of Doves, Welcome to Sis’s, (G)Arden, and Soft Apples.

Deb Sivigny is most well-known as an award-winning costume and scenic designer from Washington DC and has been a company member at Rorschach since 2006. She was a member of the second generation of The Welders, where she served as Lead Producing Playwright for her work Hello, My Name Is… Set in a house, she designed and created environments that channeled the lives of Korean adoptees. Her research includes development of “design-driven” works inspired by classic literature, politics and personal aesthetic and experience. She received the Helen Hayes Award for Outstanding Scenic Design for Forgotten Kingdoms at Rorschach Theatre and is a five time nominee. She is on the faculty at George Mason University. Website: www.debsivigny.com Instagram: @indepenguin

Jonelle Walker is a Helen Hayes Award-nominated playwright, theatre-maker, and academic based in Houston, Texas. Her previous work as a playwright includes TAME. (2016), Illyria, or What You Will (2018), The Theatre of Self-Loathing Presents … (2015), and a variety of short play projects. Jonelle is also a doctoral candidate at the University of Maryland in Theatre and Performance Studies; her dissertation studies white femininity on stage, film, and social media screens from 1865 to the present.

Through uncommon uses of environment and intimate passionate performances, Rorschach Theatre seeks to lure its audiences beyond the limits of ordinary theatrical experience so that they may discover new elements of their own humanity.

Rorschach Theatre tells stories that allow for innovative design and visceral performances. The company treats productions as “installations” that surround the audience with the world of a play. Our work centers on the intersection of magic or impossible moments and every day human experience. Without proselytizing, it provides a complex, intellectual catalyst for self-exploration of challenging subjects. Rorschach’s history of unconventional explorations has well-prepared us for the innovation the 2020/2021 Season demands.

Rorschach is a vital launching pad for emerging artists. By trusting early-career actors, directors, playwrights and designers with substantive artistic responsibilities, and surrounding them with established professionals and ample resources, the company has become an essential showcase for new talent. In addition to the regular season, Rorschach produces “Magic in Rough Spaces,” an annual new play development series; “Klecksography,” an annual new artist development event (for actors, local playwrights and directors); and “Fight Camp,” a stage combat training program held every summer. The company also organizes “Other People’s Ink: An Entertainment Curation Society,” that hosts a monthly urban adventure that explores artistic work in other genres that is similar to the company’s aesthetic. OPI includes a book club partnership with Solid State Books on H Street NE.

Rorschach has produced more than fifty plays seen by tens of thousands of people in the Washington area. The company has been nominated for over a dozen Helen Hayes Awards; won a Mary Goldwater Award; been a finalist for the Mayor’s Arts Award; and have been the recipients of multiple grants and awards from the DC Commission on the Arts and Humanities. The company’s work has garnered the attention of The New York Times, The Washington Post, American Theatre magazine and National Public Radio, as well as countless local publications.