This Wednesday, July 21, Mauricio Martínez makes his live return to Feinstein’s/54 Below with a brand-new show, Mauricio Martínez: Back on 54th Street. The NYC-based Mexican-born International Emmy winner (for the NBC Universo TV show El Vato) and star of Broadway’s On Your Feet! (reprising his role as Emilio Estefan in the musical’s subsequent national tour) was most recently seen in the Paper Mill Playhouse production of Unmasked: The Music of Andrew Lloyd Webber prior to the pandemic closure of live performance venues.

A household name in Latin America as the leading man in the Mexican productions of Disney’s Beauty and The Beast, Saturday Night Fever, Jesus Christ Superstar, The Drowsy Chaperone, Sweet Charity, The Last Five Years, and A View from the Bridge, Martínez will present a musical journey through his life, loves, and career, interspersing his song selections with personal recollections and anecdotes.

Mau, who performed his solo show De Mexico to Broadway at the iconic nightclub in 2018, told me that he feels “so excited to be back on stage after sixteen months of hibernation” and gave me a sneak preview of what to expect in the upcoming cabaret concert. The set list will feature new material, including covers of pop favorites by Adele, Barbra, George Michael, Tina Turner, and Selena, along with hits “from Broadway, of course!” There will also be a tribute, with an arrangement by dear friend and frequent collaborator Jaime Lozano (whom Mau affectionately refers to as “my brother”), to the beloved stage and screen star Doreen Montalvo (On Your Feet!; In the Heights; Mrs. Doubtfire), who passed away prematurely on October 17, 2020, at the age of 56, following a stroke.

Accompanied by musical director Brian Nash on piano, Eleanor Norton (who performed with The Cher Show and plays regularly for Alan Cumming) on cello, Jerome Jennings (head of Juilliard’s jazz department) on drums, Michael Blanco (who plays with Company and tours with Aaron Tveit) on bass, and Craig Magnano (from the Broadway orchestra of Moulin Rouge!) on guitar, Mau will also be joined on stage by special guests Michael Longoria (Jersey Boys) and Claudia Mulet (On Your Feet!), who will perform duets with him. The evening promises to be filled with beautiful music, love, and the joy of live performance. 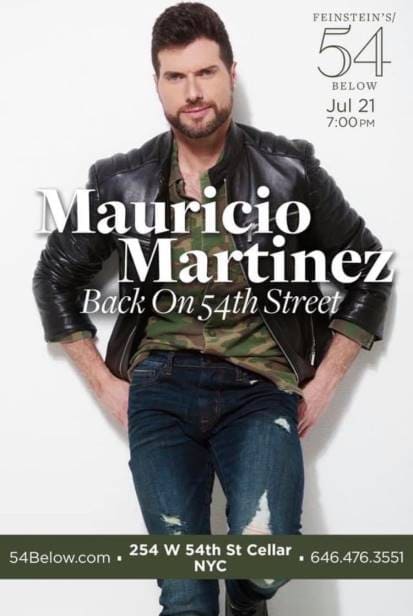