Broadway is back! Live preview performances of Pass Over, produced by Lincoln Center Theater, Matt Ross, Jujamcyn Theatres, and others, began August 4, 2021, for a limited nine-week engagement that reopens the August Wilson Theatre – and Broadway – after the long pandemic closure. Originally presented by LCT3 at the Claire Tow Theater for an extended sold-out run in 2018, the potent 85-minute drama reunites the entire original cast and creative team.

Written by Antoinette Chinonye Nwandu and directed by Obie-winner Danya Taymor, the provocative work has already received widespread attention and acclaim, including the 2019 Lortel Award for Outstanding Play for its LCT Off-Broadway debut and an Amazon Prime film adaptation directed by Spike Lee. And its searing theme has become even more urgent now, in light of our country’s powerful Black Lives Matter movement and reckoning with racial injustice.

The timely play draws its inspiration from Samuel Beckett’s Waiting for Godot and the Biblical book of Exodus to address the plague of police brutality and Black enslavement to endemic racism. Set on a city street corner, in a script that fluently combines profanity, poetry, and humor, two homeless Black men, Moses and Kitch, dream of their promised land, as they pass the time and talk smack. Their hope is that maybe today will be different and they’ll find a way out – until their plans are disrupted by a stranger, and an officer.

The cast of the show, with its official opening night now set for Sunday, August 22 [three weeks earlier than the originally scheduled date of September 12], features Jon Michael Hill as Moses, Namir Smallwood as Kitch, and Gabriel Ebert as Mister/Occifer, with sets by Wilson Chin, costumes by Sarafina Bush, lighting by Marcus Doshi, and sound by Justin Ellington.

Following the August 4 performance, West 52nd Street, between Eighth Avenue and Broadway, was closed to traffic from 8-11 pm, to celebrate the return of Broadway. The audience and the public could enjoy music from S.N.O.B. (created and hosted by DJ Duggz, DJ Ari Grooves, and Emily McGill) and special to-go menus from Haswell Green’s, Victor’s Café, and M Social Hotel were be available for purchase on the block outside the theater. 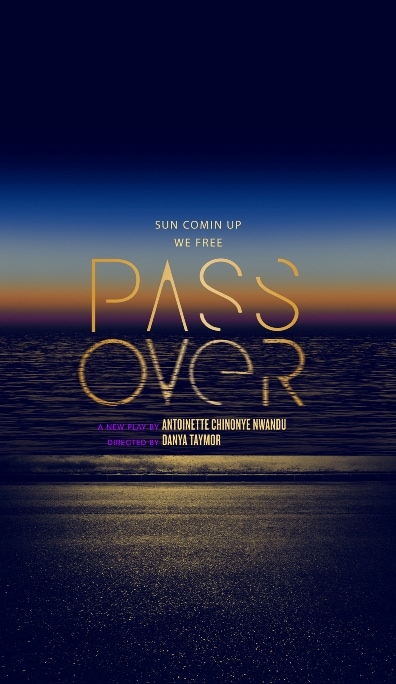 Pass Over plays from August 4-October 10, 2021, at the August Wilson Theatre, 245 W. 52nd Street, NYC. For tickets, go online. As is presently required to attend any Broadway production, ticket holders must to be fully vaccinated with an FDA or WHO authorized vaccine and must wear a mask at all times, except while actively eating or drinking. Those under the age of twelve who are unvaccinated, and those who need reasonable accommodation due to a medical condition or sincerely held religious belief, must present proof of a negative COVID-19 test.