Before the Black is Beautiful movement, before Afros and dashikis and Black Pride, there was an image problem for African Americans. They were raised in a world dominated by images of whites and indoctrinated into believing blonde hair and blue eyes were the ideal characteristics for beauty and success. Racism was rampant and real integration was sheer fantasy.

Blacks were not portrayed in TV commercials and there were no Black fashion models. There was no BET TV and not a single Black person was featured on television. Hollywood and Madison Avenue dictated the norms, and unless you were reading Ebony and a smattering of other publications targeted to Black news, you would think that to be beautiful you had to be white and Anglo-Saxon. When Black Power and Black Pride showed up in the 1960s, it changed everything.

But Nobel Prize–winning author Toni Morrison’s story is set in the 1940s when Blacks had little opportunity to succeed outside their world. Adapted for the stage by noted playwright Lydia R. Diamond, Morrison’s graphic story transports us smack dab into that soul-crushing world and features the lives of three children growing up in rural Ohio.

Young Pecola Breedlove pores over the idyllic children’s storybook Fun with Dick and Jane and imagines what her life could be like if only she had blue eyes. “Please God, make me invisible,” she cries out. But she gets no support or guidance from her parents, only neglect and abuse. When her father goes to prison and her mother is too busy for her, she is shuttled off to foster parents who have two girls her age — Claudia, who is wise beyond her years and her feisty sister, Frieda. Together they take Pecola under their wing endeavoring to shore up her confidence.

The play weaves in and out from past to future, and it is sometimes tricky to keep up, but always the beautifully lyrical prose of Toni Morrison keeps you grounded in the moment as you are drawn deeper and deeper into the challenges faced by each of the characters. It is a bit reminiscent of the book The Help, evoking the struggles of working-class Blacks where the women are domestics — cooks and nannies — and the men are useless — drunks or conmen. It is a world where fear becomes anger and anger becomes hate and hate becomes hurt. They all hurt each other as a result of leading lives filled with emotional hurt and racist indignities.

For the girls, school is fraught with a different set of struggles. When Maureen, a “high yellow” Black girl with fancy clothes and a friendly demeanor, tries to befriend them, they turn on her. “Everything about her makes me less,” Claudia jealously admits. But the ultimate indignity is when the girls visit the grand home of Mrs. Breedlove’s employer and she turns on them saying, “I don’t know them,” while she comforts their crying white child.

There is some credible and fierce acting by this amateur group, especially Crystal Arful-Addoh as Pauline Breedlove, Cyprina Stokley as Claudia, and Simone Jackson-Charles as Pecola.

The Bluest Eye presented by Dominion Stage plays Thursdays, Fridays, and Saturdays to August 21, 2021, at Gunston Theater Two, 2700 South Lang Street, Arlington, VA. All performances start at 8 pm. Tickets may be purchased at dominionstage.org or at the door.

The performance Saturday, August 14, will be ASL interpreted and will be followed by a talkback with the director and cast.

Current safety guidelines for performances: The cast and crew are fully vaccinated. The cast will perform with clear masks. The audience will be required to wear masks. 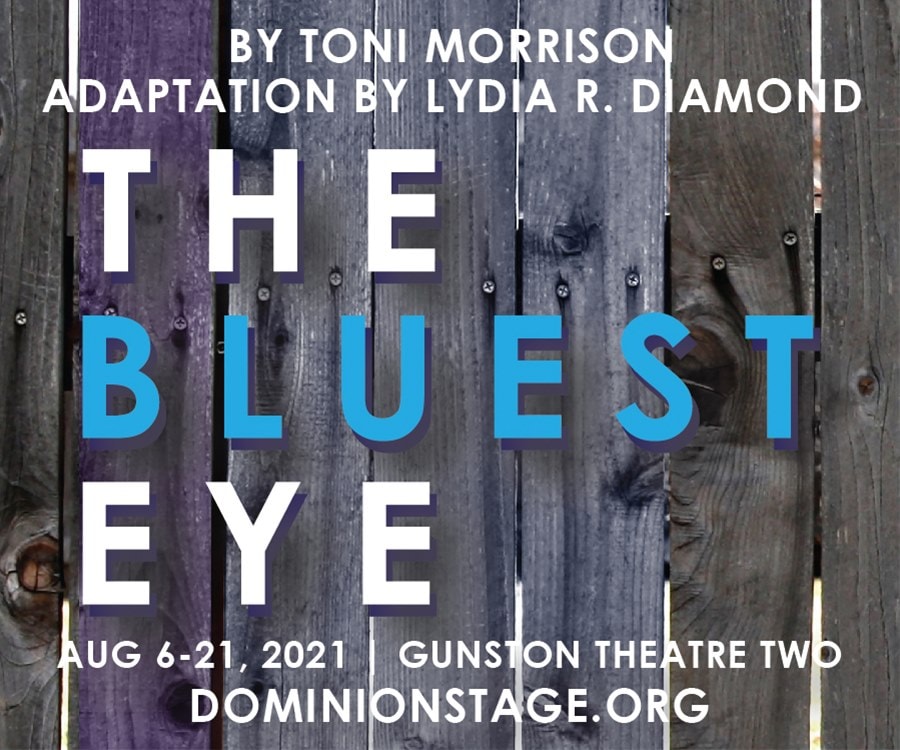