Quotidian Theatre Company’s program art for The Day Emily Married is apt on so many levels. It depicts the character Emily Davis carrying a suitcase, back to the camera, walking deliberately down a dusty road to who knows where. Her life is one of a wanderer. In the opening scenes, Emily, portrayed beautifully by Roxanne Fournier Stone, is a typical almost-bride making life plans with her fiancé, Richard, and adjusting to her family’s wishes. And what a family it is.

Her mother Lyd (pronounced like lied) is played by the inimitable Jane Squier Bruns, and her father, Lee, is matched by the top-notch John Decker. The family dynamics of this well-meaning trio are shaken to the core by Emily’s fiancé — husband Richard, played handsomely by Andrew Greenleaf, a decent guy (unlike her drunken first husband), who rescues their darling Emily from a boarding house in Houston, attends to her wishes, and insists that the couple move in the family house to help out. What could be better, right?

The Davis family is deeply rooted and financially solvent, barely, with just enough to float the monthly payments owed by a family friend tenant farmer who can just pay interest. Once Richard, who has worked on oil rigs, comes on the scene, he sees opportunities for investment, if only he could get close enough to Pops Davis, work his way through the financial records, and shake loose some of the money to fund his venture. He works hard and has quit his own job to help the family, but— and there’s always a but, how much was he eyeing the family’s meager assets to invest in his own deal? The family wrestles with Richard’s determination to fund his dream while Emily struggles with evidence of his philandering romantic scammed interests lurking on the side. True to form and yet again, Foote heaves back the lovely rocks of human experience and reveals the ugly mess squirming underneath.

Proving there are no small parts, Elizabeth Darby sashays in as cousin Alma Nash wearing luscious crinoline dresses and matching hats, consoling and comforting Emily with kind words and a listening ear. Star Bobatoon as the family housekeeper, Addie, is a solid presence to anchor the family, cares deeply for Lyd, and takes her tasks seriously with tender care. Laura Russell as Maud Cleveland, family friend and wife of the tenant farmer, is a showstopper from her first anxious entrance when she tries to get the Davis’s attention and retreats, only to return later ferociously determined to protect her family’s well-being in a showdown. The entire ensemble is superb, and Jack Sbarbori directs with deliberation and terrific choices.

Foote has a way of exposing the human condition through the constantly shifting memories and reflections of his characters. As in previous characters, Lyd’s memories fade in and out as she passive-aggressively gets her way and reflects on her life, especially pictures and mementoes from the past. Bruns is gifted in capturing the essence of her elderly characters in captivating ways. The way she moves and putters around and wraps herself in her shawl, she seems to be a helpless, frail waif. But just watch her get riled and pushed to the wall. I pity the fool who gets on her bad side because this cookie does not crumble. In one pivotal scene, Richard rears up threateningly, is audaciously rude, even commands her to sit in her chair or return to her room. Bruns as Lyd is backbone straight, doesn’t flinch or give an inch. It’s a command performance between two stellar performers.

I’ve been a fan of Bruns for years, having seen her in multiple performances, including The Dead, Foote’s The Trip to Bountiful, and a haunting solo piece, Coffin in Egypt. Performing with her and others in Night Seasons, I got a chance to see her close up and was captivated by her approach to a phrase, a pause, a reflection. What she can do with a glance, a reflective look, a flutter of the hands is gorgeous artistry—it’s old school that you don’t have much chance to witness anymore.

Sbarbori’s set design is loaded with nostalgia and well organized with a nicely spaced bedroom stage right, full parlor with ample chairs centerstage, and comfy sitting nook stage left. Legacy portraits on the walls were significant enough to be minor characters as Lyd held them to her bosom, afraid they’d be discarded or burned out of spite. The backwall door exits to a fully functioning walkway. At one point, characters speak to each other framed by the window and doorway for a striking effect. Lighting design by Don Slater darkens the mood ominously as the characters storm through their emotional passages.

Horton Foote’s plays have been described as “melancholy ruminations on the unbearable loneliness of life and the complex relationships….” The involvement of the metro area in the initial showing of this historic work is astonishing. In June 1997, The Day Emily Married was performed for the first time at Silver Spring Stage, 43 years after it was written. After Foote revised it, the play went on to New York with Estelle Parsons and Foote’s daughter, Hallie, as the key performers. (A rare interview with her that Quotidian was able to arrange can be viewed here.*)

The Day Emily Married is a true gift of artistry at work that drew many fans out for their first in-person theater event in almost two years. I can attest that even with the reduced attention spans and Zoom theater streaming that have become our norm, the time flew by for over two and a half hours. It was that well done. I could easily have sat for more.

Their last production before closing, this latest example of the fortitude and courageousness from our Quotidian treasure is a final opportunity to catch a truly remarkable work. Don’t miss it.

*On Saturday, August 14, following the 8 pm performance of The Day Emily Married, there will be a special talk-back with Gerald C. Wood, a retired English professor who is one of the world’s leading authorities on the playwright. Wood will show clips from his recent interview with Hallie Foote, the playwright’s daughter, who is an acclaimed actress and one of the world’s leading interpreters of her father’s work. 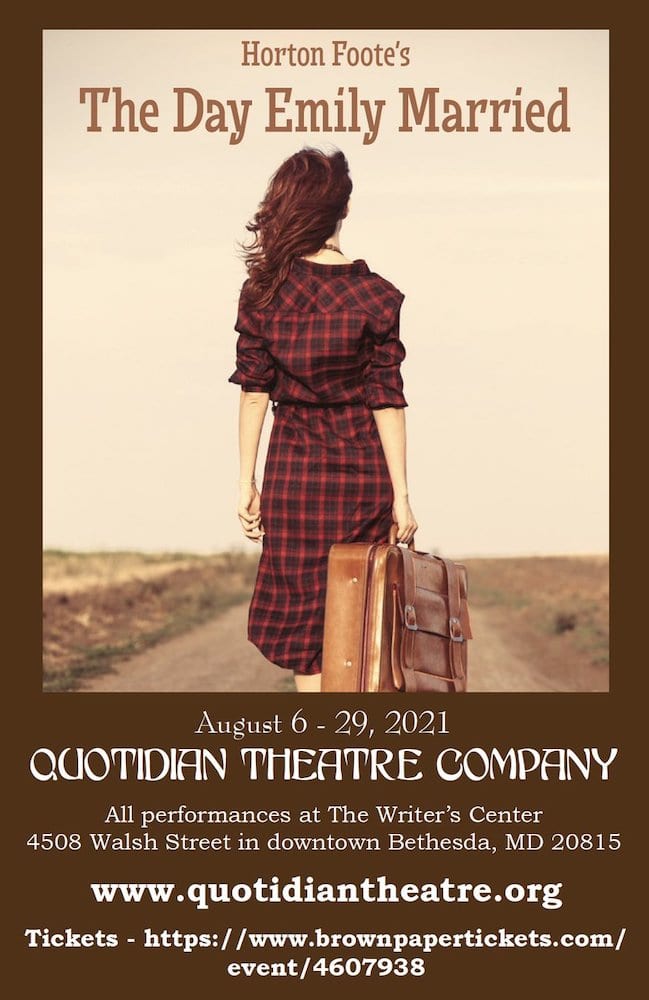