Northern Virginia’s nonverbal theater company Arts on the Horizon is coming back to in-person productions with a remount of their popular show By the Seashore outdoors. This sensory-filled production, designed for children age 0–3, uses an imaginative mix of puppetry, movement, and sound to take children on a magical journey to the beach. The show plays at the Leonadus K. Plenty Amphitheater at Lee District Park in Alexandria from September 10 to 18, 2021.

Each production Arts on the Horizon commissions incorporates elements that connect to various child developmental milestones. Knowing that a young child’s brain develops by exploring sight, touch, and sound, the company intentionally creates a sensory-rich environment. Plays demonstrate and model the importance of cooperation and creativity, empathy among the characters, conflict resolution through teamwork, and the excitement of exploring new places and engaging in new activities.

The cast is comprised of a trio of talented local actors as puppeteers. Sydney Lo returns to the cast, having originated one of the puppeteer roles in the original 2017 production. Her work has been seen at the Dallas Theater Center, Strand Theatre Company, Circle Theatre, and Pointless Theatre Company. Company member Ryan Sellers also returns to Arts on the Horizon to join the By the Seashore team. He last performed in Arts on the Horizon’s productions of Sunny and Licorice and Point A to Point B, and he directed Swept Away and Adventures with Mr. Bear. Locally, he has performed at Synetic Theater, Imagination Stage, Folger Theatre, and Shakespeare Theatre Company. Eirin Stevenson is a recent addition to the Arts on the Horizon family, performing in the organization’s recent virtual production, The Whirligig. Her work has been seen at Pointless Theatre Company, Adventure Theatre MTC, and Creative Cauldron.

Director and co-creator Kate Debelack is a proud Arts on the Horizon company member. She works as a DC area director, actor, and instructor at Studio Acting Conservatory. Previously, she has directed Arts on the Horizon’s productions of Sailing on String and Sunny and Licorice. Other directing and acting credits include the One Minute Play Festival, Capital Fringe, Cherry Red Productions, the Kennedy Center Theater for Young Audiences, Shakespeare Theatre, Studio Theatre, and MetroStage. Assistant Director Olubunmi Shabi, is a senior Theatre major at the University of Maryland. Shabi is Nigerian-American and was born and raised in Maryland. With a strong interest in theatre design and music production, she is excited to be embarking on her career in Theatre and Performing Arts. Rounding out the production team are Kat Fleshman and Natalie Cutcher. Fleshman, the show’s original set and props designer, has worked with such area companies as Mosaic Theater Company and Flying V Theatre, and is a full-time teacher at the Carver Center for Art and Technology. Cutcher is another company member who helped bring the show to life. Previously with Arts on the Horizon, she co-directed and co-created, Squeakers and Mr. Gumdrop, and has been seen on stage in Snow Day and Point A to Point B. For By the Seashore, Cutcher put her skills to use refurbishing the props for the 2021 remount.

Tickets are $10 and can be purchased online. Discounts are available for groups of 10 or more. Arts on the Horizon offers a military family rate for all performances in Virginia. Active duty military personnel and their family can purchase these discounted tickets directly on the website and will need to show a current military ID when picking up their tickets on the day of the performance. 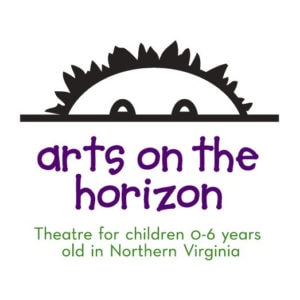 Arts on the Horizon was founded as a professional, non-profit theatre company with a unique specific focus of providing high-quality performances and arts education programs for young people ages 0 to 6 and their families. We believe the arts play an important role in children’s lives. The results can be seen in their development of critical thinking skills, self-confidence, and independence. Since 2011, our nonverbal productions have been performed on the Kennedy Center’s Millennium Stage, Atlas Performing Arts Center, Workhouse Arts Center, and other venues and schools in the DC metro area. In 2016, Arts on the Horizon was honored to be nominated for The John Aniello Award for Outstanding Emerging Theatre Company. In 2017, we were awarded a “50 for 50” Arts Inspiration Award by the Virginia Commission for the Arts in the category of “Emerging Arts Organization.” Between 2018 and 2020, five of our productions were nominated for Helen Hayes Awards in the “Outstanding Production – Theater for Young Audiences” category.