Which you can’t, because these days it’s all online, and your “window” is your laptop.

Which I’m staring at right now, trying to come up with a few bon mots to impress you with my erudition; because, of course, I’m the critic.

You, poor reader, have to slog through all this; best of luck to you.

In choosing Tom Stoppard’s hilarious satire The Real Inspector Hound, Spooky Action Theater has found the perfect play to comment on the bizarre virtual spaces we’ve found ourselves in lately. Director Richard Henrich has assembled a solid cast that, with the aid of Videographer Tim Phillips and Video Editor Gordon Nimmo-Smith, flies about your screen, one minute fully present, the next minute a simulacra, adding (or is that subtracting?) yet another delicious dimension to an already bizarre play.

As a reminder: In the original play, the critics start the show sitting in the audience right next to you, in an actual theater, and there’s an actual stage in front of you with an actual set where the play (a wicked spoof of Agatha Christie whodunits) is about to begin. So under normal circumstances—what we now refer to as “the before times”—everybody is in the same space together.

What Henrich & Co. manage to do here is to create a virtual audience area where our two critics, Moon and Birdfoot, chat each other up waiting for the house lights go to down. There is a “stage” of course, but here it consists of an obviously two-dimensional shot of a typical upper-crust, Christie-esque drawing room. When our two hapless critics end up onstage as part of the action, their transformation into two-dimensional, cookie-cutter figures is managed ingeniously. It’s a frenetic pastiche of actors thrown together onto your screen, bouncing off of each other seemingly willy-nilly.

The heart of the action is a delicious spoof of two recognizable types of writers—the jealous second-stringer and the jaded old-timer. Moon is the ambitious young recruit who dreams of intellectual and professional glory; in Robert Bowen Smith’s hands he is thoroughly ridiculous, projecting every conceivable school of modern philosophy onto what is clearly the most pathetic murder mystery ever conceived. His partner, Birdfoot, meanwhile, couldn’t care less about the play, because he’s using his review to seduce the ingenue after the show. As Birdfoot, Steve Beall (who shamelessly admits that headshot you saw in Spooky Action’s promotional email is decades old) sends up the blustery, worldly hack who knows exactly how to bed an actress. Too bad his wife rings him up in the middle of the show…

The tacky whodunit we’re supposed to be watching is played with suitable coarseness (and I mean that in the best way) by a number of appealing folk, beginning with Wendy Wilmer—who, as Mrs. Drudge the maid, somehow manages to virtually haul a massive couch onto the stage, while turning on a virtual radio (staged in a completely separate frame) and answering a virtual phone (ditto). Then there’s the obligatory catfight between stereotypical ingenue Felicity Cunningham (the charming Jackie Madejski) and the apparently widowed Cynthia Muldoon (Carolyn Kashner at her scenery-chewing best). The two of them compete shamelessly for the affections of Simon Gascoigne, who of course takes full advantage—Danny Cackley’s subtle swagger helps immensely here.

Meanwhile there’s Matti Griffiths as the gruff Major Magnus Muldoon, who somehow manages to careen across the stage even in pixelated form (David Crandell’s sound effects give an extra dose of fun to Muldoon’s entrances). And when James Sullivan barges in as Inspector Hound we get the blunt New York gumshoe, cluelessly sure of himself. (Once the critics Moon and Birdfoot have found themselves onstage, it’s Simon and Hound’s turn to sit in the audience and critique the action. Don’t ask how, just go along with it, OK?)

The world of virtual theater, as we have come to experience it, consists of home-bound audiences that see you online. If you’re an actor, you’re part of a troupe of three-dimensional players each in your own home, projecting your two-dimensional selves onto a virtual screen set, pretending to be in the same fake room together. And by “fake” I mean really fake, because it isn’t even a physical set, it’s just pixels. The actor is reduced to pixels pasted on top of pixels, manipulated by a Pixelmeister—or is that Pixie-meister?—who manages your entrances, exits, set changes, murders, etc., while you stay perfectly still.

Spooky Action Theater has found a way to blast away at the hastily assembled conventions of a genre nobody wanted to touch until, say, March of last year. The Real Inspector Hound was ridiculous fun already, but when you add the extra layers of virtual reality, which invites its own special brand of visual satire, it’s a truly heady kind of fun. Treat yourself!

Running Time: 85 minutes, with no intermission 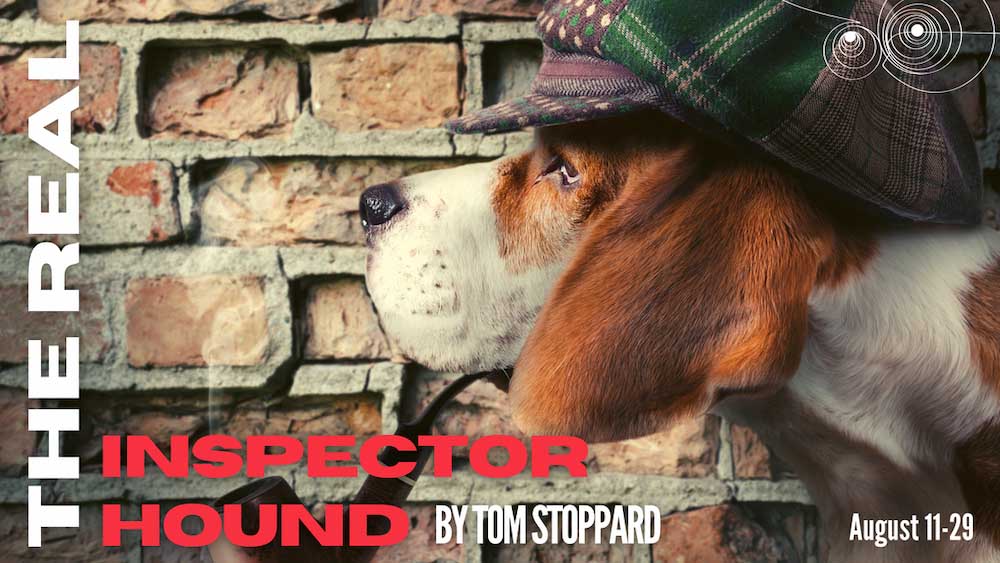