Just launched this month as the fifth stand-alone episode in Reign or Shine Productions’ six-installment podcast series April Is the Cruelest Month (the title and concept of which were inspired by the opening line of T.S. Eliot’s 1922 poem “The Waste Land”), The Earth Will Quake has proven to be the most successful yet in the audio anthology. And that comes as no surprise, since the original story, written by Matthew Klein and John Petrie, features the voice of NYC-based performer and writer Erik Ransom, who garnered an international reputation and following upon winning London’s Off West End (Offie) Award for his musical GRINDR: The Opera.

In keeping with the eponymous theme, the 35-minute fictionalized narrative is based on the true historic event of The Great San Francisco Earthquake – one of the worst natural disasters ever to hit the US, which struck the coast of Northern California on April 18, 1906 – synthesized with the ancient Greek myth of the sorceress Medea, who murdered her own sons after their father Jason abandoned her to marry the Princess Creusa.

Directed by Kelly Monroe Johnston, co-creator of The Cruelest Month (formerly called Don’t Sue Us, Please), Ransom and his real-life partner Scott Brieden, who starred together in the hit indie film Happy Yummy Chicken, provide the voices of a magical family’s teenage twins Nick and Nicky, whose parents’ unhealthy relationship incites their mother to cause the deadly earthquake and resultant fire.

Erik revealed that the actors were not told about the Medea connection until after the audio play was recorded, but because it’s one of his favorites, he did pick up on the classic source, and it informed his performance. He also believes that the new work is a clever and interesting take on the original, told from the perspective of the children. “Here they are not mere devices to tug at your heartstrings,” he explained. “They’re a little older, and you can see their mother in them – they’re all outsiders, and they’re as vengeful as she is.”

For Scott, recording the podcast was a very new experience, in “a medium that was familiar, but different, after the year we’ve had of putting live in-person acting on the back burner.” He found it useful that he and Erik were able to record their lines together, so that even though the audience doesn’t get any visuals, the actors could “see each other, react, and play off each other in these complementary roles.”

Erik added that the twins are parts that neither one of them would be able to play on stage, because they’re not teenagers and they’re not of the same race or ethnicity. But with voice acting, “we can play against type and utilize our vocal and acting skills without being seen.”

Kelly told me that the Reign or Shine creative team pivoted from live theatrical productions to podcasts as a result of the pandemic shutdown, but will continue to produce new works in the audio format even with the reopening of in-person venues. A fan of the old radio-play genre, he loves the fact that, because they’re not visual, podcasts force you to engage your imagination, especially with stories that are well-written and compelling. He also appreciates the opportunity to be able to cast talented actors from anywhere, without having to be in the same room. “We’ve had vocal performances from every corner of America,” he said. “Geographical boundaries have been eliminated,” which opens the podcast up to the entire entertainment community, as well as to listeners, who can access the work worldwide. 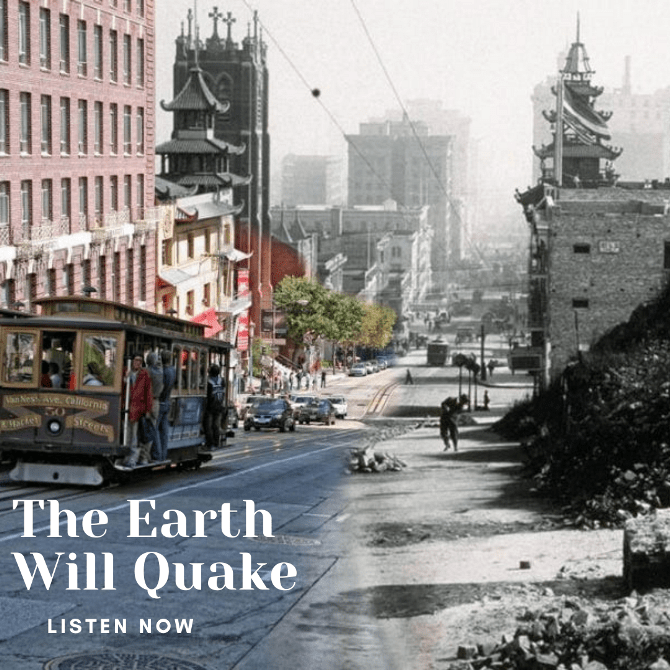 The Earth Will Quake, in April Is the Cruelest Month, by Reign or Shine Productions, is available now Apple Podcasts, Soundcloud, and across all popular podcast platforms.