Set in NYC and weaving back and forth in time from the 1960s to the 1990s, the stranger-than-fiction (and far more fabulous!) narrative presents a gripping and spirited insider’s account of how Robert Morley’s mummified corpse with bullet holes in its head came to be found in the closet of the legendary eponymous drag queen, fashion designer, trans woman, and mother of the House of Corey, following her death at the age of 56 in 1993. In addition to re-examining the shocking headline news, it also recreates the challenges and camaraderie of gay life in those more oppressive decades, capturing the torment of widespread homophobia, attacks, and abuse, along with the joy of being able to be one’s true self within the sanctuary of a safe house, shared by a loving and supportive new family in the gay and transgender community, of which Corey was a dedicated, revered, and beloved leader.

The revelatory two-act play combines segments of direct address, audience interaction, and glittering drag performances interspersed amidst scenes of the go-back story, from an investigator’s brutal interrogation of the flamboyant, outspoken, and uncharacteristically evasive drag queen Velma (Corey’s dear friend, long-time resident of the House, and suspected eyewitness), Dorian’s post-mortem reminiscences about the times, her experiences, and philosophy of life, and re-enactments of the characters’ backstories, interactions, and events leading up to the fatal incident of some 25 years in the past. Without being dry or pedantic, Jones’s thoroughly engaging script is full of rich meticulously researched historical details, first-person accounts, and informative recollections, employing the uncensored language, authentic behavior, and attitudes of the day. And despite its central morbid theme, it is lively and heartwarming and laugh-out-loud funny, while delivering an important message about the need for acceptance, respect, and trust.

Referencing her appearance, voice, and demeanor in the 1990 film Paris Is Burning (documenting the diverse Houses in New York’s contemporary voguing ball culture), Scott Weston’s unerring performance as Corey is a spot-on homage to her pioneering life and nurturing spirit, from sitting at a dressing room table applying make-up to lip-synching in full-out spectacular drag (costumes by Dominique N. Mercado and Scott Stewart) to providing encouragement, familial bonds, and a protective haven for disenfranchised homeless outcasts in her Harlem apartment.

The outstanding Isaac Dean as the irrepressible Velma provides a hilarious and impassioned counterpoint to the more controlled Dorian, commanding the stage with unbridled call-outs, animated movements, and mimicked quotations from the greatest heroines of the stage and screen, rendering both the character and the actor irresistible forces of nature.

Under the dynamic direction of Laurence C. Schwartz, the supporting cast, too, provides telling characterizations of the lead figures’ housemates (Spencer T Gonzalez as Joseph, Frank Muni as Willie, Marlon Alexander as Manny, and Grant Hale as Regina) and antagonists (Jake Thomas as Detective Dombrowski and Matt Braddak as the soon to be mummified Bobby). All avoid being mere period stereotypes with their evolving three-dimensional portrayals and empathetic humanity, or, in the case of the latter two, convincingly hateful viciousness.

Case Closed: The Dorian Corey Story will keep you engrossed and amused right up to the surprise ending, when the elusive mystery is finally solved and the case is truly closed. 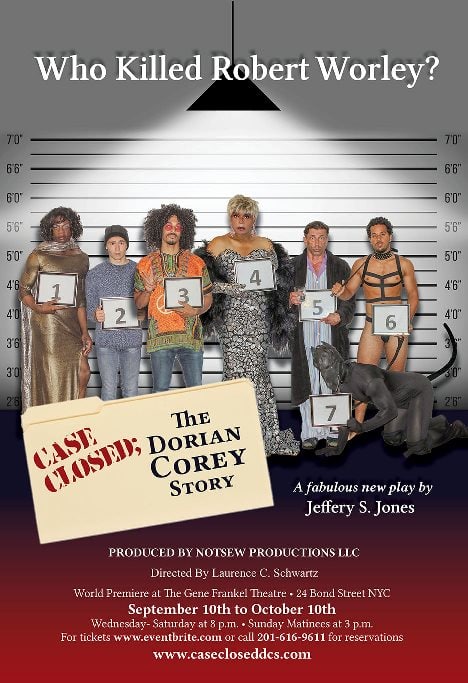 Case Closed: The Dorian Corey Story plays through Sunday, October 10, 2021, with Notsew Productions, at the Gene Frankel Theatre, 24 Bond Street, NYC. For tickets (priced at $50, with discounted Student and Senior admission available for $30 on Wednesdays and Sundays), go online.