America’s favorite sex therapist returns as Theater J remounts its 2018 production of Becoming Dr. Ruth September to October 24, 2021. Our reviewer David Siegel called the original staging “a lucid, heartfelt evening of theater.” And Ravelle Brickman got this interview with Dr. Ruth Westheimer herself.

When the curtain goes up on Becoming Dr. Ruth — the one-woman show starring Naomi Jacobson and directed by Holly Twyford — the character on stage at Theater J is not, primarily, a sex therapist or a celebrity.

Instead, the character is an immigrant, one of the many who would have been turned away from the United States 80 years ago.

Fortunately for her followers on TV and radio and in books and magazines, the child who became Dr. Ruth Westheimer — and subsequently Dr. Ruth — managed to escape. I spoke to her on the phone before the play opened and asked her about her immigrant years. “I’m literally an orphan of the Holocaust,” she told me, describing the terrible experience of saying goodbye to her parents at the railway station in Germany. It was shortly after Kristallnacht in 1938, when just about every Jew who could get out of the country did. She was 10 years old when she boarded the train that was bound for a children’s home in Switzerland. She never saw her family again.

“It was pure luck that I survived,” she said. That was because the train she boarded — called the Kindertransport and part of a short-lived effort to save the Jewish children of Europe — was one of the few accepted by the supposedly neutral Swiss Government.

Had she been sent to Holland, France, or Belgium — all countries that accepted more Jewish children, but were ultimately occupied by the Nazis — she would almost certainly have been killed.

What happened after the war? I asked.

“I made a beeline for Palestine, to what would become the Jewish Homeland. I was 17 and I lived on a kibbutz,” she replied.

Two years later, she joined the Haganah — now part of the Israel Defense Force — and was badly wounded in battle in 1948. But luck intervened again. “Thanks to a brilliant surgeon, I not only survived, I learned to dance and ski!”

And dance and ski she did, when she moved to Paris. There she studied at the Sorbonne and taught kindergarten. In 1956, she became an immigrant again, this time arriving in the U.S. and settling in a leafy neighborhood, near the Cloisters, in the northern part of Manhattan.

The rest is all official biography. She received her doctorate and went on to a career as a college professor, all the while maintaining a private psychotherapy practice, writing 44 books, appearing on her own syndicated radio and TV talk shows, producing documentaries for public television, and adding a dash of sexual whimsey to commercials for products like Pepsi. She even created a board game (now adapted for the computer) called Dr. Ruth’s Game of Good Sex.

“Here’s how it happened,” she explained. “I went to the New York opening of Freud’s Last Session and I loved it. After the performance, I met the actor who played Freud, and he introduced me to the playwright, Mark St. Germain, who wanted to write a play about me.”

At first, she demurred. “No, enough already,” she said, with a classic shrug.

“But then Mark pointed out that by telling my story on stage, we would be dealing a blow to all those who deny that the Holocaust ever happened, reminding them, and everyone else, that I, a noted American educator, was once an orphan of the Holocaust.

“That convinced me. Suddenly I realized that a play about my survival — brought to life by a team as powerful as Naomi Jacobson and Holly Twyford — might actually make a difference.”

“Naomi Jacobson is perfect for this role,” said the ‘real’ Dr. Ruth.

Of course, the idea of having her name linked with that of Sigmund Freud — even though they disagreed on many things — was appealing.

“I was flattered to be considered part of the same realm,” Ruth conceded. “Freud and I both escaped from the Nazis — he from Vienna and I from Frankfurt — just before it became too late.

“And we were both committed to lifting the curtain of shame from human sexual behavior.” On the other hand, she added, “Freud was sexually ignorant. He misunderstood the nature of women’s sexuality, and did a great disservice to us all.”

Donning her academic hat, the 89-year-old professor at Columbia University’s Teachers College quipped, “He should have taken my course.”

Mark St. Germain, the playwright responsible for immortalizing both as leaders in their respective fields, has since become a close friend. Several times a year he addresses her students at Columbia.

The play itself, she added, “is a wonderful memorial to my parents and grandparents, aunts and uncles, and cousins and friends, all of whom died in the Holocaust. I hope everyone will see it!”

Running time: 75 minutes with no intermission.

Becoming Dr. Ruth plays September 30 through October 24, 2021, at Theater J, in the Aaron and Cecile Goldman Theater, located inside the Edlavitch DC Jewish Community Center at 1529 16th St. NW, Washington, DC. Patrons will be able to buy tickets to see the play in person or stream the production from home. For tickets, call the box office at (202) 777-3210, or purchase them online. (The box office is available 1 pm to 5 pm Monday through Friday and one hour before a performance.) Single ticket prices range from $35–$70. Discount ticket packages are available for three or more plays in Theater J’s 2021–2022 season, in addition to flex passes. 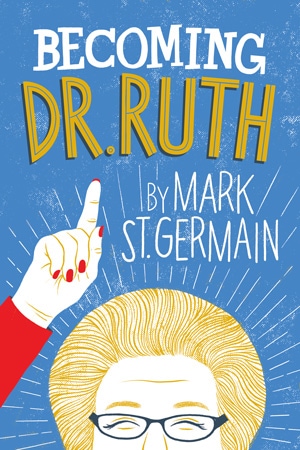 A Postscript:
I first met ‘Dr. Ruth’ when she received the Shofar Award, some 10 years ago, at Central Synagogue in New York City. Her acceptance speech, to my astonishment, was aimed entirely at the children in the audience, most of whom were sitting close up, in the first few pews of the congregation. Instead of jokes about sex, she talked about the heart-wrenching experience of leaving her parents at the train station in Frankfurt in 1938, when she boarded the KinderTransport bound for Switzerland. She spoke of the cruelty of the orphanage, where only boys were allowed to study science and math, while girls were stuck with cooking, sewing, and other domestic chores. She went on to tell of her escape to what was then called Palestine, where she joined the Haganah and fought for Israel’s independence.

It was an astonishing speech, coming from this diminutive lady—barely able to reach the microphone—who spoke English with a heavy accent and a sense of humor. Many of us thought of her as an invention of the media, and probably not even a real doctor. Afterward, I complimented her on the speech and remarked at how surprised I was that her talk was addressed to the children.

“But it’s about the children,” she said, chiding me gently.

And from then on, whenever I saw her—which was quite often since, both being short, we like sitting up front at events—she always reminded me: “Don’t forget. It’s about the children.