Throughout the run of Teenage Dick at Woolly Mammoth Theatre Company, open-captioned, ASL-interpreted, and audio-described performances will be available. The play happens to be about a character with a disability, but that’s not why. There’s a larger story here. The company, which creates (in its words) “badass theater,” has refreshed its mission and guiding principles—after a year of deep reflection on its legacy and values—and plans to offer accessible performances for the entire season.

“Our newly revamped mission statement and guiding principles capture the theater that we aim to be. They are purposefully aspirational and provide direction for where we are heading, as well as accountability in how we live our values on a daily basis,” said Emika Abe, managing director, who collaborated with Woolly’s Accessibility Committee.”By putting additional resources and intentionality around our being more accessible to people of all abilities, we are practicing the radical inclusion that has been a consistent core value that we have carried forward.”

Exactly how Woolly intends to accomplish its accessibility goals was explained in an interview with Timmy Metzner, director of marketing.

How did you get involved in making theater accessible? Why is it important to you?

Timmy Metzner: Part of being radically inclusive is removing barriers for members of our community who live with disabilities to attend theater. Our industry has a longstanding history of ignoring those needs — and Woolly is implicated in that. It is time to recognize that inaction around making those changes is a form of ableism. At Woolly we have committed to working against ableism, so we’re on a journey to move that from language and into action.

Take us behind the scenes.  What are the ways you are making theater at Woolly accessible? What do you do and how do you do it? What is involved (preproduction, rehearsal, run of show) in making the different types of accessibility (open captioning, ASL interpreting, audio description) happen?

We’re starting this season with offering open-captioned, audio-described, and ASL-interpreted performances. Our hope is we’ll be able to include sensory-friendly and relaxed performances into our schedules in the future as well. These services were previously only offered by request, which we’ve learned is the wrong way to provide accessible programming. Our revised intention is that these performances are being scheduled, communicated, and woven into the design of productions from the beginning rather than being tacked on at the end. For example, in Teenage Dick, the open caption screen is designed right into the set. Our different interpreters and operators will be included in the rehearsal process to learn the shows, and our lighting design/seating configurations will provide optimal experiences for patrons needing those services. It’s the planning and the intentionality that marks the difference for us this season.

Who are the audiences you serve? What response have you received from them? How is Woolly connecting with audiences who have accessibility needs?

We’re working on building those relationships. The last thing we want to do is create a purely transactional relationship with members of the disabled community. Our desire is to build something deeper. That means putting in the time to meet people, listen to their concerns, acknowledge past mistakes, and begin to make amends for exclusionary practices. We’re working with experts in the field, as well as community leaders to ensure that outreach is authentic and mutually beneficial.

SEE ALSO:
Woolly Mammoth returns to in-person performance with ‘Teenage Dick’
Woolly announces a season of artists ahead of their time

Teenage Dick runs through October 17, 2021, at Woolly Mammoth Theatre Company, 641 D St NW, Washington, DC, with performances Wednesday through Friday at 8 pm; Saturday at 3 pm and 8 pm and Sunday at 2 pm and 7 pm.

Single tickets start at $29. Twenty-eight Pay-What-You-Will tickets are also available to every single performance by selecting the PWYW seats and adjusting the ticket price.

All Single Tickets are available online, by phone at (202) 393-3939, and via email at tickets@woollymammoth.net.

Patrons who are 30-years-old and younger may, at any time, purchase Section C tickets for $20 to any performance. There are also discounts available for educators, first responders, and active U.S. military personnel, spouses, and veterans. More information is available at woollymammoth.net.

Entrance to any event at Woolly Mammoth requires proof of vaccination or, for those who are not vaccinated, proof of a negative COVID-19 PCR test taken within 72 hours of the event start time. Guests may show physical or digital proof of their health status. Masks must also be worn at all times while in the building. 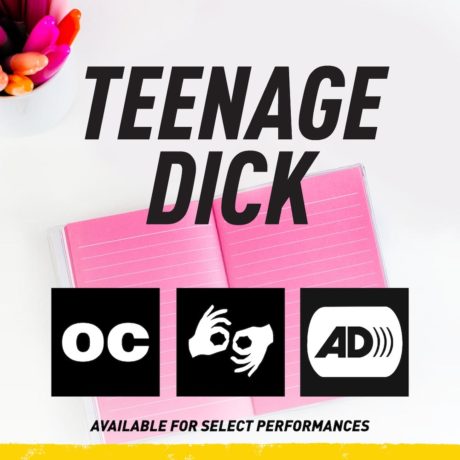 ASL-interpreted performances feature interpreters placed inside the theater who translate to the audience what the actors are saying and expressing.

Assistive Listening Devices are available for all performances. Transmitters and accompanying headsets and ear speakers are available at the Box Office.

Woolly Mammoth creates badass theater that highlights the stunning, challenging, and tremendous complexity of our world. For over 40 years, Woolly has maintained a high standard of artistic rigor while simultaneously daring to take risks, innovate, and push beyond perceived boundaries. Co-led by Artistic Director Maria Manuela Goyanes and Managing Director Emika Abe, Woolly is located in Washington, DC, equidistant from the Capitol Building and the White House. This unique location influences Woolly’s investment in actively working toward an equitable, participatory, and creative democracy.

One of the few remaining theaters in the country to maintain a company of artists, Woolly serves an essential research and development role within the American theater. Plays premiered here have gone on to productions at hundreds of theaters all over the world and have had lasting impacts on the field. These include the world premiere productions of Danai Gurira’s Eclipsed in 2009, which later went on to be the first Broadway play with a cast and creative team of all Black women; Bruce Norris’ Pulitzer Prize winner Clybourne Park in 2010; and Anne Washburn’s Mr. Burns: a post-electric play in 2012. Woolly produces theater beyond our building by sending productions like Aaron Posner’s Stupid Fucking Bird across the nation and bringing Aleshea Harris’s What to Send Up When It Goes Down to neighborhoods throughout DC. A national tour of Madeline’s Sayet’s Where We Belong will launch in 2021. In addition, Woolly was the first in the DMV to pioneer Pay-What-You-Will tickets, which are now available at every single performance.

Woolly Mammoth acknowledges that the theater stands upon occupied, unceded territory: the ancestral homeland of the Nacotchtank, whose descendants belong to the Piscataway peoples. Furthermore, the foundation of this city, and most of the original buildings in Washington, DC, were funded by the sale of enslaved people of African descent and built by their hands. Understanding that history and context, Woolly values building relationships with neighbors and resident artists in the DMV. Our nationally acclaimed Connectivity Department is one of the ways we accomplish this by linking Woolly to like-minded community organizations in order to generate mutually beneficial impact and power-aware partnerships.