Adventure Theatre is kicking off its 70th season with Luchadora!, an action-packed show centered around a Mexican American family in honor of Hispanic Heritage Month. Written by the award-winning playwright Alvaro Saar Rios, Luchadora! dives into the exciting world of lucha libre—Mexican freestyle wrestling, which dates back to 1863 and was developed and invented from Greco-Roman wrestling.

This was the theater’s first in-person show post-pandemic, and the excitement was evident on everyone’s face. Or rather, through their voices and body language, since we all still had masks on.

The stage is small, but Director Ricky Ramon maximizes the space using large mobile panels, painted with buildings and churches of the town (designed by Harlan Penn). And the panels open to reveal a very realistic-looking wrestling ring.

The story begins when a young girl, Vanessa (Autumn Angelettie), discovers a pink mask in her Grandma Lupita’s (Ruth Elizabeth Diaz) suitcase. Her curiosity is piqued and Grandma Lupita promises to tell her the story behind the mask, but only if Vanessa swears to secrecy!

Grandma Lupita begins talking of her childhood in Texas in the ’60s. As she does, her memories come alive and Young Lupita (Savina Barini) appears tending to her Father’s flower stand. Her friends Liesl (Tsaitami Duchicela) and Leopold (Patrick Ko) come by to see her, and Grandma Lupita looks on with fondness as they interact.

Lupita’s ailing Father (Christopher Rios) comes by the stand to check in and has a mysterious briefcase that he has forgotten to drop off. Lupita convinces her Father to let her and her friends take it so they can ride their bikes around town. After much hesitation Father agrees and instructs them to take the case to the Mask Maker, who will know what to do.

At the Mask Maker’s (P. Vanessa Losada), Lupita is surprised that she knows who she is and is told by the Mask Maker that she will soon go to Cream City, puzzling Lupita. Ultimately, she discovers that her father is a famous luchadora (wrestler), who didn’t show up for a fight and disappeared for years but has newly accepted the challenge of El Hijo (Andrew Quilpa) to once and for all settle a rivalry. Lupita, afraid for her father’s safety, decides to train to take his place. Issues of sexism, male pride, and tradition stand in her way, but she will work hard to save her father from harm.

Luchadora! is an inspiring tale that teaches children to work hard for their dreams. And it flies in the face of gender norms and stereotypes. A girl is not limited by her gender, she can only be limited by society and other people’s preconceived notions.

That being said, I would by no means label this as a show only for girls. That moral needs to be heard by boys as well. Plus the overarching theme of family history, trust, and perseverance is a good message for anyone. And besides, the wrestling scenes are awesome!

The responses from the crowd are especially loud and exuberant during these matches. My son “oof”ed and cringed, while a group of young girls screamed in delight whenever a spectacular move was executed. The energy was palpable as, quite literally, a woman battles against toxic masculinity.

The show also touches on other important topics like valuing a person’s time, taking responsibility, and honoring relationships.

Lupita and her best friend Leopold’s relationship is touchingly sweet. Barini and Ko depict their connection with genuineness and navigate some hard moments of knowing when to confide and what that confidence is worth.

These struggles occur with Lupita and her Father as well. Rios portrays the proud, stubborn, and protective Father with a heart of gold, even if his views on the roles of women are severely outdated. And Banini reflects her father’s same characteristics of stubbornness and the need to protect the ones she loves.

Grandma Lupita and Young Lupita also have many small, silent, but beautiful interactions. Diaz’s knowing looks and smiles as she watches Barini enact her past. The pride and love she has for her story is wonderful to watch and adds another layer of love, self-love, that is such an important practice to show to the youth.

Adventure Theatre’s Luchadora! is a fantastic production for the entire family. The cast brings these rich characters to life, and shows an exciting part of Mexican culture, while driving home the idea that a girl can do anything she dreams of.

Congratulations to the cast and crew on an uplifting and inspiring production. 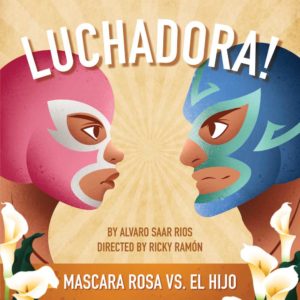