To celebrate the return of Broadway, The Broadway League (the national trade association for the theater industry), in partnership with Audience Rewards (Broadway’s first and only official rewards and loyalty program), has announced that This is Broadway’s Ultimate Ticket Giveaway is open now through 11:59 pm, Friday, October 15, 2021. Theater lovers can enter the sweepstakes for a chance to win four tickets to all 38 shows on Broadway, from returning hits like Hamilton and Wicked to such highly anticipated new productions as MJ: The Musical and Plaza Suite.

Audience Rewards Executive Vice President Katie Dalton noted, “This spectacular prize will give one winner a truly once-in-a-lifetime opportunity to experience everything that Broadway has to offer and to share it all with family and friends.”

“This sweepstakes is a perfect way for fans to participate in the excitement surrounding Broadway’s long-awaited reopening. After all, there’s no more exciting prize in the universe than getting to see all the shows playing on Broadway,” said Broadway League President Charlotte St. Martin. “We’re thrilled to be partnering with Audience Rewards to make one special Broadway fan’s dream come true.”

One grand prize winner will receive four tickets to see all of the following Broadway plays and musicals: Ain’t Too Proud; Aladdin; American Utopia; Caroline, or Change; Chicago; Chicken & Biscuits; Clyde’s; Come From Away; Company; Dana H.; Dear Evan Hansen; Diana; Flying Over Sunset; Freestyle Love Supreme; Girl From the North Country; Hadestown; Hamilton; Harry Potter and the Cursed Child; Is This A Room; Jagged Little Pill; Lackawanna Blues; MJ: The Musical; Moulin Rouge! The Musical; Mrs. Doubtfire; Pass Over; Plaza Suite; SIX; The Book of Mormon; The Lehman Trilogy; The Lion King; The Music Man; The Phantom of the Opera; Thoughts of a Colored Man; Tina – The Tina Turner Musical; To Kill A Mockingbird; Trouble in Mind; Waitress; and Wicked. 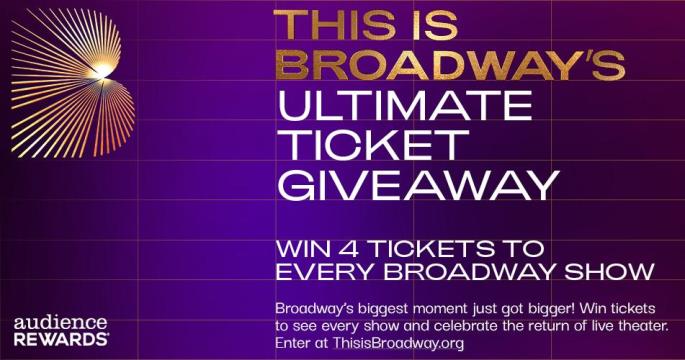 The Broadway ticket giveaway is free and easy to enter for all new and existing Audience Rewards members. Click on the links here for more information, a full list of official rules, and to enter the sweepstakes. The drawing will take place on or about Wednesday, October 20, when one lucky winner will be selected at random and notified within two days via mail, email, or phone.