With A Familiar Melody, NextStop Theatre Company is staging a giddy reunion of artists and audience — just the ticket to reclaim a long-lost connection. At the outset, when dreamy baritone Marquise White gazes into the black box’s stadium seats and exclaims, “They’re real!” it dawns on masked patrons that we’ve become as much spectacle as spectators.

Emerging from their COVID-induced hibernation are four pillars of local stages who take turns soloing and cross-pollinating to mutual delight. First up is Ricky Drummond, a quadruple threat as acclaimed playwright, director, actor, and singer, who starts things cooking with delicious — at times tasteless! — ham. He opens the show as cowboy Curly, expressing with wide-eyed wonder not only that “beautiful feeling” he’s got, but an incredible, euphoric one because theater’s back!

Drummond is reliably funny yet free of corn. He can morph from prince to court jester, all in the same scene. He alternately nails the shticks of balladeer Adam Sandler and Monty Python, often injecting operatic verve — tackling both male and female parts — and occasional animal noises. But when paired with White in the luscious duet “I Don’t Remember You/Sometimes a Day Goes By” from Kander and Ebb’s The World Goes ’Round, Drummond sings us to heaven. With vocal vigor, these leading men tap a double-barreled vat of desire — that swollen reservoir of feeling running through every lovesick ballad.

White, best known around town for playing Benny in In the Heights, is a gifted storyteller, although he croons cautiously and strains under some of the evening’s high-register demands, such as in Stephen Sondheim’s “Marry Me a Little” (Company). He updates the caddish testimony of Shakespeare’s Petruchio (“Where Is the Life of Late I Led?” from Kiss Me, Kate) using a smartphone, scrolling through images of his conquests. Panning for golden notes, he eventually scoops us up in Ragtime’s “Wheels of a Dream”; the power and pride in his delivery easily trigger tears, and he momentarily makes us forget Brian Stokes Mitchell from last week’s Tonys showcase. By the time White vamps as Effie from Dreamgirls with a bombastic “You’re gonna love meeeee!” — oh, we do.

Playing his Sarah in the “Wheels” duet is fresh-faced Alex De Bard, a singer/songwriter by day who has made her mark in local children’s theater. Through the quarantine, she branched out into vodcasting and cutting-edge virtual theater, and her career now seems on the verge of blooming. De Bard’s unique, smoky voice is layered in old soul and youthful spunk. Her praise-worthy little-known offerings range from a kid-pleasing Disney heroine (The Princess and the Frog) to nervy pop runs in “If I Had You (I Could Use a Drink)” from the contemporary songbook of Drew Gasparini. She meets her match in comic cuteness facing off with Drummond in Little Shop of Horrors’ “Suddenly, Seymour” — their tremulous choreography displays an unbridled commitment to character.

Character-wise, Drummond seems to up everyone’s game. But the night’s brightest star, Katie McManus, who first rouses with a heart-thumping, knee-slapping “If You Knew My Story” (Bright Star), needs no help. Part of the fun in attending a cabaret is figuring out where else you’ve seen the performers, and it seems the marvelous McManus has shined in everything she’s done.

It’s like sitting in on a master class for gymnastic singing and stage presence. She simply wows — 10s across the board, for level of difficulty, style, and substance. Her belts seem cinchy; her control unflinching. McManus makes accessible the most inscrutable Sondheim tune or syncopated, dissonant volleys of Cy Coleman. She serves up a tasty “Moments in the Woods” from Sondheim’s Into the Woods (reprising her role as the Baker’s Wife in NextStop’s 2014 production and that of Little Theatre of Alexandria way back in 2006). In “Change” (William Finn’s A New Brain), her queen-bee metamorphosis is complete. Arguably the evening’s showstopper of showstoppers, which comes too soon, is her amped-up duet with Drummond, “The Song That Goes Like This” (Spamalot). You may know exactly how it goes but still be tickled by their over-the-top-please-don’t-stop take.

Performers of this caliber seemingly need no direction, but co-directors Evan Hoffmann and Ashleigh King manage to stitch a patchwork of material and emotional range into a taut pastiche. Musical director and accompanist Elisa Rosman keeps the trains running on time, even orchestrating a lightning-round finale, which fulfills the “familiar melody” brief. As Rosman calls out roughly 25 show titles not yet sampled, the players snap to it, delivering frantic snippets of each.

I was tempted to shout some requests — say, something by Maury Yeston — Titanic: A New Musical? (McManus would have known it, given she captivated as lassie Kate McGowan in Signature’s 2016–17 version.) With audience interaction, the proceedings might evolve to feel even more spontaneous. But on opening night, with only a dozen ticketholders in a 100-seat space, social distancing was ridiculously effective, putting the patrons themselves somewhat on the spot. 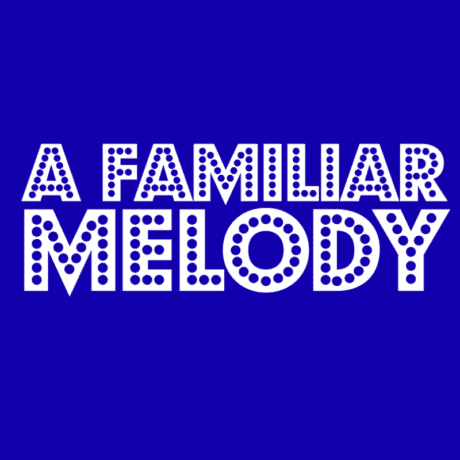 C’mon, musical theater fans. We’re all in this together. You must recall the delight of a curtain going up. At NextStop’s Industrial Strength Theater, situated in a Herndon business park, the thrill comes just before 8, when the lobby’s garage door rumbles closed, setting bodies aquiver. In his pre-show announcement, Evan Hoffmann, producing artistic director, assures us of NextStop’s commitment to the health and safety of the community, saying the troupe is “deeply passionate about bringing live theater back.”

A plea, then. Practice safe re-entry with A Familiar Melody. The songs may ring a bell, but the show is not the same old song and dance. Broadway virgins and veterans alike can thrill to its highlights — and there’s nothing but highlights here! A grand night of singing indeed.

Song List
“Oh, What a Beautiful Mornin’” from Oklahoma!
“I’m Almost There” from The Princess and the Frog
“Ten Minutes Ago” from Rodgers and Hammerstein’s Cinderella
“If You Knew My Story” from Bright Star
“Wondering” from The Bridges of Madison County
“The Song That Goes Like This” from Spamalot
“What You Don’t Know About Women” from City of Angels
“Where Is the Life That Late I Led?” from Kiss Me, Kate
“Grow Old With You” from The Wedding Singer
“Wheels of a Dream” from Ragtime
“Moments in the Woods” from Into the Woods
“When He Sees Me” from Waitress
“Suddenly, Seymour” from Little Shop of Horrors
“I Don’t Remember You/Sometimes a Day Goes By” from The World Goes ’Round
“Change” from A New Brain
“Marry Me a Little” from Company
“Fight the Dragons” from Big Fish
“If I Had You (I Could Use a Drink)” from The Songs of Drew Gasparini
“We Kiss in the Shadows” from The King and I