Following the success of Distance Frequencies, Rorschach Theatre returns with a new season-long immersive experience, Chemical Exile. In it, a scientist boards a plane from Amsterdam to Washington, DC. Returning to a world she thought she knew, she discovers that nothing, and nowhere, is what she expects. From October 2021 to July 2022, Chemical Exile takes participants to eight locations across the DC area as a complex story unfolds about families, forgotten histories, and the uncharted frontiers of the mind.

Subtitled A Psychogeographies Project, Rorschach’s visionary Chemical Exile takes participants to unexpected locations around their city while a season-long fictional narrative plays out over layers of history and magic realism. Guests receive a box in the mail monthly that includes a new chapter in the story. Each box contains hand-crafted objects — letters, drawings, souvenirs, photos, or even snacks — and a map to a location in their city. The season ends with a live in-person event that culminates the story. 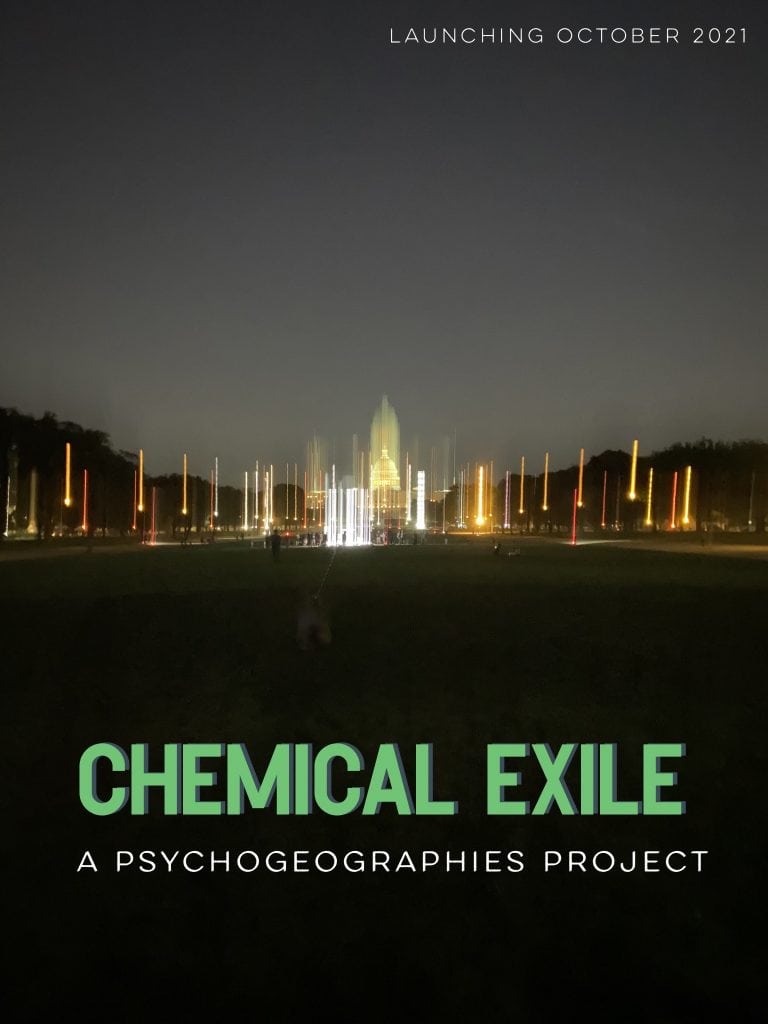 DC Metro Theatre Arts reviewer Kendall Mostafavi raved about the project, “Rorschach Theatre’s current production is…an adventure of the mind and, if you wish, the body…  Rorschach Theatre has hit the jackpot with this innovative form of art, incorporating literature, music, mystery, romance, and DC’s highlights and history, all steeped in a hope for a better world.”

The first chapter of Chemical Exile: A Psychogeographies Project releases October 24, 2021, but participants can join at any time and will be sent the chapters they missed. Tickets for Chemical Exile are $175 and are on sale now at rorschachtheatre.thundertix.com/. Each purchase includes seven boxes by mail and one ticket for the in-person summer performance. Additional tickets for the live performance will be available in spring 2022. For more information and a link to FAQs go to rorschachtheatre.com/chemical-exile/.

Safety considerations: Most locations will be outdoors and avoid crowds. Participants are required to follow local and private business mask requirements where applicable.  Rorschach strongly recommends that all participants be vaccinated against COVID-19. Rorschach asks non-vaccinated participants to take part in the experience only from home. Proof of vaccination may be required to attend the final live performance in summer 2022. Participants who prefer not to leave their homes at this time can access a video walking tour and will receive an adapted version of the instructions that can be executed from home. The final performance will be recorded and available to subscribers in the fall of 2022.

Jonelle Walker is a Helen Hayes Award-nominated playwright, theater-maker, and academic based in Houston, Texas. Her previous work as a playwright includes Distance Frequencies (2020), TAME. (2016), Illyria, or What You Will (2018), The Theatre of Self-Loathing Presents … (2015), and a variety of short play projects. Jonelle is a doctoral candidate at the University of Maryland in Theatre and Performance Studies; her dissertation analyzes white femininity on stage, film, and social media screens from 1865 to the present. She is also Co-Host and Producer of the RomCom Killjoys podcast.

Shayla Roland is a theater producer, administrator, and former stage manager. She served as the Associate Producer for Penumbra Theatre Company in Saint Paul, MN from 2017-2019 and the Special Programming Manager at Ford’s Theatre in Washington, DC from 2013 – 2016. In these roles, she worked alongside artistic teams in season planning, casting, and curating new audience engagement initiatives. As a DC-based stage manager, she’s worked for Ford’s Theatre, the Source Festival, Adventure Theatre, and Hangar Theatre (NY). Shayla was a member of Theatre Communications Group (TCG)’s inaugural Rising Leaders of Color cohort in 2016. Currently, Shayla works as a PMP certified project manager at a mental health association in the Northern VA.

Kyle “Kylos” Brannon is an Assistant Professor in the School of Communication at American University and currently the Interim Division Director for the Film & Media Arts Program. For over a decade, Kylos has performed as a VJ, or live video artist, at clubs, crafting live video mashups for DJs including Moby, MSTRKRFT, Nadastrom, Jesse Tittsworth, and Will Eastman. He’s performed at 930 Club, U Street Music Hall, The Black Cat, Saturn Birmingham, Brooklyn Bowl, and others. As a company member with Rorschach Theatre, Kylos works as a video projection designer on the productions 410[gone], Reykjavik, Annie Jump & the Library of Heaven, She Kills Monsters, The Toxic Avenger: The Musical, and last year’s Distance Frequencies. He has also been working as lead designer for the Center for Environmental Filmmaking’s Media Report, along with the corresponding website. He has created installations and live video performance pieces, including immersive experiences for Little Salon DC, and Forgetting is Normal, a solo exhibit at the Anacostia Arts Center. He was the co-director for the documentary An Impression: Dischord Records, and the co-producer on the web series Stage Fright, for American University and NBC4.  Every Spring, Kylos produces and directs the Visions Awards, an annual student film awards ceremony held at American University.

Randy Baker is a playwright, director, and the co-Artistic Director of Rorschach Theatre in Washington DC. Recent shows he has directed include Very Still and Hard to See (Five Helen Nominations including Best Director) and She Kills Monsters with Rorschach, and Hello, My Name Is… with The Welders (Three Helen Hayes nominations including Best Director) and a shadow puppet gamelan-inspired A Midsummer Night’s Dream at WSC Avant Bard. Recent plays he has written include the world premieres of Forgotten Kingdoms and Truth & Beauty Bombs: A Softer World at Rorschach Theatre and workshops and educational productions of The Burning Road (Arena Stage), Monastery (Theater J), and Rashōmon (American University and Spooky Action Theatre). The Legend of Hang Tuah will premiere at Pointless Theatre in 2022 (an adaptation of the Malay Legend with shadow puppets and martial arts). Randy is an adjunct professor at George Washington University and is faculty at The Theatre Lab School of the Dramatic Arts. He received his MFA in creative writing from Goddard College and is the Washington DC regional rep for the Dramatists Guild of America.

Jenny McConnell Frederick is a Director, Producer, and strong believer in impossible theater. She’s the co-Artistic Director of Rorschach Theatre which she founded in the summer of 1999 with Randy Baker. For Rorschach, she has directed more than a dozen shows including the Helen Hayes Nominated Voices Underwater and God of Vengeance as well as both of the sold-out runs of Neil Gaiman’s Neverwhere. In 2015, she conceived and directed Truth & Beauty Bombs, an original work based on the Canadian webcomic, “A Softer World.” She co-created Chambers of the Heart and MOVE!, two immersive dance/theater projects at Word Dance Theatre. She served as Artistic Director of CulturalDC’s Source Festival and Mead Theatre Lab Program. In that capacity, she oversaw the selection, development, and production of more than 200 works for the stage over nearly a decade. Work developed and produced by Jenny at the Source Festival boasts multiple National New Play Network Rolling World Premieres, several American Theatre Critics Association Steinberg Award Nominations, and an Osborn Award Winner.  Jenny has directed for Theater J, Catholic University, and University of Maryland.  She’s currently a member of Theatre Washington Advisory Board and has served as a mentor director for the Theatre Lab’s Honors Acting Conservatory and for the Kennedy Center’s American College Theatre Festival and was a featured speaker at the CityWrights Conference in Miami. She graduated cum laude from Virginia Commonwealth University with a BFA in Theatre and briefly joined Mensa for the free pencils. She lives in Takoma, DC with her husband and their long-term collaboration, a son named Thane.

Through uncommon uses of environment and intimate passionate performances, Rorschach Theatre seeks to lure its audiences beyond the limits of ordinary theatrical experience so that they may discover new elements of their own humanity.

Rorschach Theatre tells stories that allow for innovative design and visceral performances. The company treats productions as “installations” that surround the audience with the world of a play. Our work centers on the intersection of magic or impossible moments and everyday human experience. Without proselytizing, it provides a complex, intellectual catalyst for self-exploration of challenging subjects. Catalyzed by the circumstances of 2020, the company leveraged our unique strengths to create Psychogeographies, a groundbreaking project that combines history, fiction, magic realism, and real-world excursions in a new kind of theatrical experience.

Rorschach is a vital launching pad for emerging artists. By trusting early-career actors, directors, playwrights, and designers with substantive artistic responsibilities, and surrounding them with established professionals and ample resources, the company has become an essential showcase for new talent. In addition to the regular season, Rorschach produces “Magic in Rough Spaces,” an annual new play development series; “Klecksography,” an annual new artist development event (for actors, local playwrights, and directors); and “Fight Camp,” a stage combat training program held every summer. The company also organizes “Other People’s Ink: An Entertainment Curation Society,” which hosts a monthly urban adventure that explores artistic work in other genres that is similar to the company’s aesthetic. (“Klecksography” and “Other People’s Ink” are on hiatus for the 21-22 season.)

Rorschach has produced more than fifty plays seen by tens of thousands of people in the Washington area. The company has been nominated for over a dozen Helen Hayes Awards, won a Mary Goldwater Award, been a finalist for the Mayor’s Arts Award, and been the recipient of multiple grants and awards from the DC Commission on the Arts and Humanities. The company’s work has garnered the attention of The New York Times, The Washington Post, American Theatre magazine, and National Public Radio, as well as countless local publications.