The Peter’s Alley production of Proof is proof positive that live theater is back and alive and well. Nestled between the ever-mounting industrial buildings and huge 18-wheeler rigs parked along Four Mile Run, Theatre on the Run is still standing, and this remounting of the show originally produced in 2013 couldn’t come at a better time.

Set on the back porch of a Chicago bungalow, the story opens with 20-something Catherine having a conversation with her father, Robert, an esteemed University of Chicago mathematician. We eventually learn that he has just died, and she’s reliving their conversations in her mind and heart. What also emerges is that Catherine is likely just as gifted as her father, and was all set to pursue her mathematical pursuits but gave everything up to return to the house and care for the ailing Dad who was losing his grip on reality.

A key premise for the play is figuring out who actually formulated a proof of an age-old mathematical theorem. David Gamble plays the brilliant though mentally deteriorating professor Robert, who’s known in the field for his multi-dimensional prowess in figuring out the most intractable mathematical calculations. Even when he was retired and reclusive, his assistants still flocked around him like he was the holy mathematical grail and mourned his recent death like family. One of those assistants, Hal, played with irrepressible bounce and charm by Patrick Joy, was so inspired by the Professor’s impeccable logic and achievement that he’s determined to dig into the hundreds of notebooks left in Robert’s house certain to find nuggets of genius to continue what he knows must be buried in there to seal Robert’s legacy.

Catherine, played with solemn grace by Emma Lou Hebert, sits alone in the big empty house, surrounded by memories of her father, devastated by the loss while dealing with the impact that caring for him in his decrepit mental state may have exacerbated her own decline. She lashes out with fury at the least provocation then curls up in almost fetal self-protective positions. Are these temporary lapses of grief or early signs of her own impending mental instability? And what should she do about it?

The prize-winning script by David Auburn has Catherine buffeted by the inquisitive Hal, who has admired her from afar for years, and older pragmatic sister, Claire, played by Anna Fagan, who softens and smooths the sharp angles of what could be an acerbic drill-sergeant sibling. In a take-charge approach, Claire is already making plans to sell the house (she’s footed all the bills) and nudges Catherine to start anew by moving in with her and her fiancée to New York. Oh, the things they could see and do together! But Catherine has her own ideas. She’s rooted in her memories and comforted by being in the only home she’s ever known. In addition, she’s been exploring her father’s notebooks filled with inanities and gobblygook and devising her own ideas for a theorem. When she shows Hal a masterwork of mathematical achievement that she tucked away in a safe, he’s ecstatic to finally have evidence of Robert’s profound mind. But in a fascinating plot twist, Catherine reveals that it’s her work, her proof. But she hasn’t even finished college. Is she hallucinating? Fantasizing? Lying? Make-believing? Thus spins the query: who actually developed this amazing proof?

While the script refers to mathematical theory and numbers, its main intention is tackling real-life issues of caring for an incapacitated parent, siblings going at it over the family property, making hard decisions and choices, daily sacrifices, and moving on after loss. It’s got it all. Proof won the Pulitzer Prize in 2001 for grappling with these kinds of human values of trust and faith in relationships.

Director Aly B. Ettman directed the show with keen insights and a solid approach, designed the costumes, and even played big sis Claire in the company’s previous production. The talented designers work together to bring the story alive in the rather open space. The back porch set by Dan Remmers works surprisingly well, providing the intimacy for poignant moments and room for the characters to rumble along as needed. Sound designer Bruce Hirsch opens the show with mellow cello music while lighting by Ian Claar creates soft amber glow through the windows. Then as the story progresses, the two team up to depict an unexpected rocking, slamming par-tay inside the house after the memorial service. Who knew that theoretical mathematicians could rock the house like that?! With Hal on drums for the band named Imaginary Number, anything is possible.

Galileo is credited with saying that mathematics is the language with which God has written the Universe, and to understand mathematics is to understand God. Peter’s Alley’s Proof brings human interests into the realm of numerics by orchestrating a beautifully crafted script full of hope in uncertain times where we could all use a bit of order despite the chaos. An occasional visitation from loved ones at rest and maybe an unexpected fling with a slam rocking band wouldn’t hurt either. 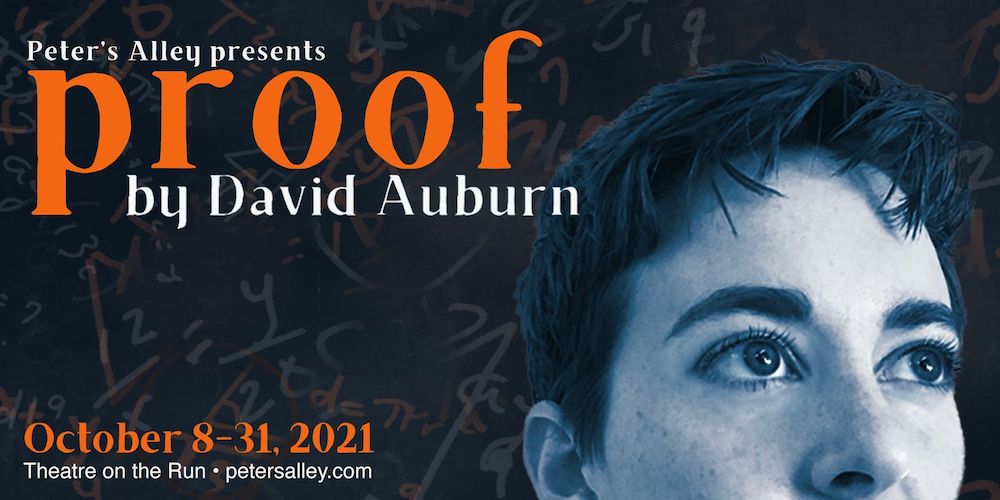 Proof plays through October 31, 2021, presented by Peter’s Alley performing at Theatre on the Run, 3700 South Four Mile Run Dr., Arlington, VA. Tickets are $20 and can be purchased online.

Peter’s Alley adheres to the Covid 19 Safety Guidelines detailed here. Proof of vaccination and masks are required for admission.