With its huge cult following of “Hed-heads” and significant place in both theater and LGBTQIA history, the four-time Tony Award-winning alt-culture musical Hedwig and the Angry Inch by John Cameron Mitchell (writer, director, and lead actor) and Stephen Trask (composer and lyricist) has continued entertaining and inspiring audiences since its Off-Broadway premiere in 1998, Broadway debut in 2014, 2016 US national tour, hundreds of regional and international productions, and 2001 film adaptation. It also provided the inspiration for the 2019 punk-rock concert spectacle Return to the Origin of Love: The Songs and Stories of Hedwig by the show’s co-creators, in honor of that year’s PRIDE50 celebration.

Following a pandemic-time postponement of its previously scheduled June run at The Town Hall, the current two-night presentation of John Cameron Mitchell & Stephen Trask: Return to the Origin of Love was, according to Mitchell, just “one positive COVID test away from being canceled.” But despite the spike in Omicron infections across NYC, the show went on to the delight of the enthusiastic fans and grateful performers, who were clearly ecstatic to be back on stage and rocking the house (even though, in accordance with safety protocol, Mitchell’s signature crowd surfing wasn’t an option last night).

The concert traces the evolution of Hedwig, the development of its characters, and the backstories of the artists and their unending support of the queer community through personal recollections interspersed with a set list of the hit’s iconic songs. Although the venue is large, the night is intimate, thanks to the stars’ high-spirited direct-address format, constant interactions with the audience, and open and engaging personalities. From their first meeting and the genesis of their collaboration through the journey of their creative process, the classics and historic events that informed it (including Aristophanes’ speech on “The Origin of Love” in Plato’s 4th-century BC Symposium, the Bible’s expurgated Gnostic Gospels, and the fall of the Berlin Wall in 1989), and the people who contributed to their success (with special shoutouts to the generosity of Lou Reed and Dolly Parton), the show is filled with insights, laughs, and powerhouse performances that defy “the binarchy” and promote non-binary culture.

Along with Mitchell’s outrageous in-character punk moves and blockbuster vocals, and the comparatively softer style and more mellow commentary by Trask (who fronted the ‘90s NYC punk band Cheater), co-star Amber Martin (named one of the Top Performers of the Year by The New Yorker) and special guest Richard Butler (co-founder and lead singer of the Psychedelic Furs) also wowed with their stellar voices, all backed by the Tits of Clay band, under the musical direction of Justin Craig. Among the highlights for theater-lovers and Hed-heads were such favorites from Hedwig as Mitchell’s emotive rendition of the titular “The Origin of Love” and “Wicked Little Town,” here performed as a duet by Mitchell and Butler.

This exhilarating “love letter to Hedwig fans everywhere” is enhanced by hilarious live-feed projections and video by Michael Zumbrun and Cho Su-hyun, wild costumes by Erik Bergrin (most notably Mitchell’s multi-layered “transformer dress”), and the distinctive wig and makeup design by Mike Potter (who has been with the Hedwig team since the beginning at Off-Broadway’s Jane Street Theatre).

The crowd’s frenzied standing ovation resulted in not one, but three encores, each of which consisted of not just a single number, but another full set, featuring additional songs from Hedwig (“Angry Inch” among them), from the performers’ own albums, others by Trask, and hits by such noted rock stars as David Bowie (belted out by the amazing Martin). Mitchell also conducted a live auction of an original artwork, which raised $1000 for charity.

You have one more chance to catch this high-energy tribute to Hedwig and its salient alt themes at The Town Hall, so my best advice is to get your tickets now. If you can’t make it tonight, you can look forward to the return of Mitchell and Trask in June 2022. We can only hope that by then he might even be able to return to crowd surfing. 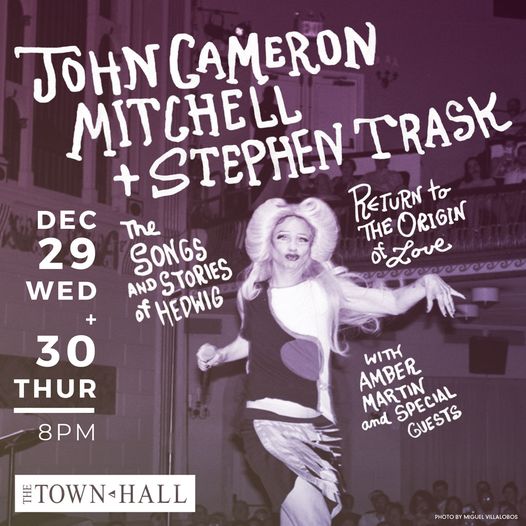 John Cameron Mitchell & Stephen Trask: Return to the Origin of Love plays through Thursday, December 30, 2021, 8 pm, at The Town Hall, 123 West 43rd Street, NYC. For tickets (priced from $50-500), call (212) 997-6661, or go online. All proceeds from the sale of VIP tickets, which come with a gift bag of unique autographed items, will go to organizations working across the LGBTQIA community. Based on current CDC and state guidelines, protocols include mask enforcement, proof of COVID-19 vaccination or negative test verification, and photo ID. Ticket holders who do not comply with venue policies will not be admitted.