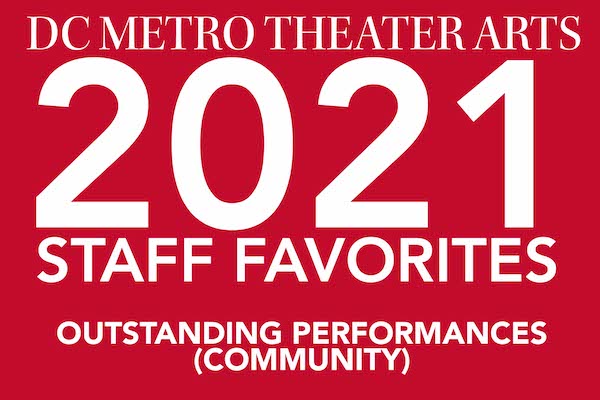 As the year draws to a close, we asked DCMTA writers to think back on the shows that left an indelible impression on them in 2021. Here are the performances that stood out to our reviewers. This year, we reviewed shows within a 30-mile radius of Washington, DC. Congratulations to everyone who managed to put on a show this year. You are all amazing in our book.

A Black and White Cookie, Silver Spring Stage
Melvin D. Smith as Harold
Harold, an avid Mets fan who wears his love of baseball on his sleeve, chest, and cap, faces forced retirement if he loses his newsstand. Melvin D. Smith finds the heart in Harold, a man who forms a bond with a friend in spite of past pre-conceived notions.
Read Lisa Traiger’s full review

A Doll’s House, Part 2, Silver Spring Stage (Zoom)
Jacqueline Youm as Nora
Jacqueline Youm in Silver Spring Stage’s production of A Doll’s House, Part 2 plays the lead Nora with great complexity, making passionate arguments against marriage that even today feel controversial, while also manipulating the other characters to help her achieve her goals. She can also be frustrating, rejecting a noble gesture to be a martyr for her ideals. Even more impressive is that Youm gives such a powerful, complex performance through Zoom.
Read Charlie Green’s full review

Rumors, Rockville Little Theatre
Joseph Coracle as Ken Gorman
In this Neil Simon comedy, Joseph Coracle plays party guest Ken Gorman. Coracle excelled in his use of physical humor, employing laugh-inducing gestures and facial expressions as he peeked out from behind doors and ran up and downstairs while checking on a gunshot victim. At one point in the show, his character is temporarily deaf. This allowed for hilarious exchanges like “I hear you have a cold.” “You think I look old?” Coracle used every part of his being to play up the comedy of these exchanges.
Read Nicole Hertvik’s full review

The Mountaintop, Rockville Little Theatre
Robert Freemon as Dr. Martin Luther King Jr. and Zenia McPherson as Camae
Freemon and McPherson lend appropriate gravitas to this fictional two-hander about how Martin Luther King Jr. spent the evening before his assassination. The Mountaintop, beautifully produced and played, is as relevant today as Dr. King was in his own time. As King, Freemon alternates between exhaustion, flirtation, and panic. As Camae, the maid in the hotel where King spent his last night, McPherson is charismatic, on edge, and a fine preacher in her own right.
Read Sophia Howes’ full review

The Revolutionists, The Colonial Players of Annapolis
Carey Bibb, Samantha McEwen Deininger, Mary Rogers, and Ryan Harris
Lauren Gunderson’s play The Revolutionists opens on the apartment of Olympe de Gouges, a writer and social activist, played here by Mary C. Rogers. As the first act proceeds, we are greeted by two figures who loom large in French history: Marie Antoinette (Ryan Gunning Harris) and Charlotte Corday (Carey Bibb). The fourth character is Marianne Angelle—played by the stunning Samantha McEwen Deininger—who did not exist in fact but is a composite character representing free Black women on the island of Saint-Domingue. Each of these women brings a different energy to this ensemble and it makes for a great production. Rogers, as Gouges, is believably restrained and frightened by the reality of her own power to impact history with her words. Bibb, as Corday, delivers instability while reminding us of the injustice of Charlotte Corday’s trial. Harris’s comedic timing is impeccable as the doomed queen Marie Antoinette.
Read Darby Dejarnette’s full review

The Wizard of Oz: A British Pantomime, The British Players
Amanda Dullin-Jones as Toto
Throughout much of the first act, Dullin-Jones gave a spectacular wordless performance (she is a dog after all). Even without words, Dullin-Jones conveyed high-spirited humor that made it clear she belonged on that stage. But her big moment comes near the end of Act One when she breaks out into song (and encourages the audience to applaud her. She is now a talking dog, after all!) with the number “My Heart Belongs to Dottie.”
Clare Palace as Salt and Sarah Leembruggen as Pepper
Then there are Salt and Pepper: a hip-hop duo who join in searching for Dorothy once she is lost in Oz. The duo’s rap to the iconic “Push It” — renamed “Pop It” with new lyrics specific to the show — is a high point in the production’s hilarity. Clare Palace as Salt and Sarah Leembruggen as Pepper are like a hip-hop, Cockney-accented Abbott and Costello. Their big number induces many justly earned guffaws.
Missi Tessier as the Witch
As the Wicked Witch, the fierce Missi Tessier filled the auditorium with cackles every time her energetic presence hit the stage. Her stage presence was invigorating. A high point in her performance was the song “Whatever Lola Wants” from the 1950s musical Damn Yankees (restyled as “Whatever Witchy Wants”). In addition to her electrifying performance, Tessier also contributed to the new lyrics of many songs in the show.
Read Nicole Hertvik’s full Wizard of Oz review