In 2016, Major Attaway – a more than 20-year veteran entertainer who began his career in the Dallas/Fort Worth, Texas area – made his Broadway debut in Disney’s Aladdin, playing and understudying the roles of Genie, Babkak, and the Sultan. In 2017, he took over the Tony Award-winning part of Genie for three years, becoming the longest running actor in the role. He then appeared, before the pandemic shutdown of theaters, as Fatty Arbuckle in the NY City Center Encores! production of Mack and Mabel in 2020.

In addition to his notable NYC stage credits, Attaway’s fame extends to the screen, in the popular original Netflix series Orange is the New Black and in an upcoming HBO series. He has also lent his voice-acting talent to numerous projects, including providing the voices of NuCalm, One Piece, Pokémon, Borderlands 3, The Pathfinder Series, Snack World, Bread Barbershop, Smite, Fairy Tail, Battleborn, and Dragon Ball Z Kai. To the delight of his followers, he livestreams the games that he voices in character on his Twitch channel, where he plays with and against fans.

On January 31, at 9:45 pm, the versatile performer will be bringing his Disney-based cabaret show The Genie’s Jukebox, with which he has launched his solo career and a tour, to Feinstein’s/54 Below. In it, he explores a different and slightly evil version of the character we all know and love, while asking, who are the Genie’s would-be favorite vile villain cohorts? Attaway will cover all the answers in his concert, which features special guest Korie Lee Blossey (Genie on the national tour of Disney’s Aladdin), with music direction by August Haas.

The in-person show is also part of the new series Live from Feinstein’s/54 Below, offering real-time streams of live performances direct from the supper club with an in-house audience, to make more shows accessible to fans everywhere and to recreate the live experience (via livestream only; it will not be available on demand afterwards). So if you can’t make it to the venue, you can watch it online at home.

Major was kind enough to take fifteen minutes out of his busy schedule to answer some quick questions about his show, his magical role, and his famed career. And I didn’t even have to rub a lamp to make him appear!

Major Attaway: The first would be to teleport; the time we take to get places is ridiculous! The second would be to make things out of garbage, like a human recycling plant. And the third is from a book series I used to read as a kid, called Animorphs – the ability to turn into animals.

Oh, a bad genie, of course! Villains make the world go ‘round.

It was THE MOST important! To have the honor to back up a Tony winner, to get the training every day to be able to transition into that role, to tell the story, and to be someone’s first Broadway memory – it was a great responsibility, and one that all of us on Broadway are capable of doing as a standby, understudy, or swing, or we wouldn’t be there. Though some people groan about not seeing the original star in the role, many others are excited to have the unexpected experience of seeing a different interpretation of the character. It’s an exact reflection of life itself.

Pride, anticipation, and a little fear.

Time travel, without affecting time itself.

Oooh, that’s good! Let’s say, “Everybody Wants to Be a Cat.”

I would love to take the show to Hawaii, to the island of Oahu.

A speaker for music, a salt lamp for ambiance, and a tea kettle – for tea!

It used to be the Pasta Bolognese – it was life-changing. And the Espresso Martini.

Luther Vandross. His talent reached so much further than most of his fans knew, in terms of his writing – absolutely brilliant!

The monopoly on nostalgia; they have it.

Of course, but it has yet to be written for me. And who knows? I might have to write it for myself.

Having my debut as the Genie, my first character on Broadway. The weight of that role was the way I felt and thought about Broadway as a child. My whole theater career flashed before my eyes; it was affirmation, confirmation!

I’ll tell you when I get there! That’s really how I feel; I’ve got work to do. But I love being loved.

Thanks so much, Major, for a fabulous fun-filled fifteen minutes, and for keeping me, – and, I’m sure, our readers – entertained and happy with Aladdin, this interview, and The Genie’s Jukebox! 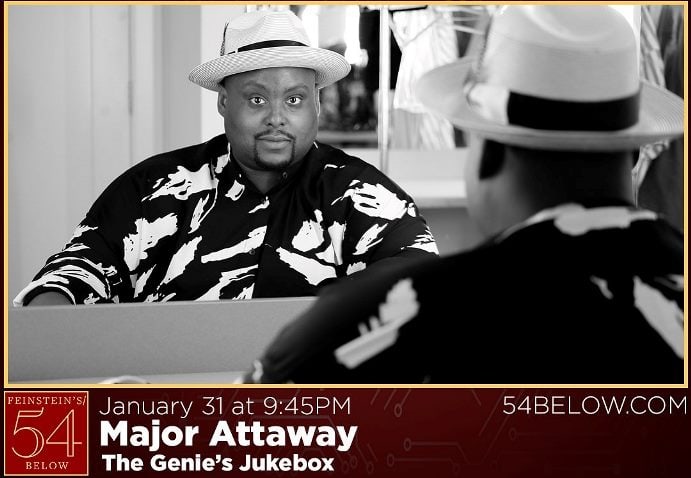