Considering he was married five times — twice to the same woman — American playwright Neil Simon knew a thing or two about marriage. For argument’s sake, let’s say he knew even more about divorce.

Conceived in the winter of his career as an experiment in “farce turned dramedy,” The Dinner Party rolls together the wisecracking icon’s familiar corn with something far meatier. Centered around three sets of exes, it explores the acrimony in matrimony, while disa-vowing the notion that there’s anything really good in goodbye.

For its winter offering, Vienna Theatre Company has defrosted this rare cut of marital beef — and my compliments to the chef, Director Tom Flatt, who filters out the groans on the page with expert pacing and turns what might otherwise be trifling talk into a well-balanced treatise on reconciliation. It’s a full course in Neil Simon and well worth your time, at a time when most of us can only dream about dinner parties.

Setting the tableau: A mysterious invitation brings six strangers, or merely estranged people, to a fancy Parisian restaurant. The first three guests to arrive, all men, realize their common thread is that they were represented by the same divorce lawyer, their alleged host. They logically assume they’re being set up to meet three eligible ladies, Dating Game–style. As the women stagger in, an overarching “love is blindness” theme finally reveals that the couples not only have crossed paths before but have walked down the aisle together, though it takes the first half of the play (the farcical part) to get all six of them in the same room at once. Then what a stew they’re in! It helps to work up a hearty appetite for couples therapy as they sort things out (the dramedy).

And dinner never actually happens. A better name might have been “The Cocktail Party” given, as with many farces, a drink cart takes center stage (stage right).

Simon once said that with this work “he was trying to write a play very different from anything he had done before,” that he “wanted to break the concept that farces can never get real, even for a minute.” No surprise it opened on Broadway just two years after his second divorce from actress Diane Lander. Simon often drew from real life in his plays, and one pair in Dinner Party has also gone through two divorces together. Although there’s little realism in the storyline, VTC’s superbly talented on- and off-stage artists inject authenticity that makes the zingers and Cupid arrows both relatable and deliciously fun.

Sometimes it’s the little things that count. For instance, Sound Designer Jon Roberts and Soundboard Operator Turner Bridgforth ensure that every time the French doors open, a slice of the din from other diners whooshes in. A bathroom door is subtly bathed in light to cue entrances and exits, and lights rise and dim in response to plot dynamics — a light touch by Lighting Designer Jay Stein and Lighting Board Operator Micheal J. O’Connor.

The production’s secret sauce, though, is a never-coupled couple — an odd couple, if you will. The chemistry is off the charts between Bruce Alan Rauscher as the intellectual Claude, who is first on the scene and the discoverer of the Drink Cart, and Dave Wright as simpleton Albert, No. 2. Claude is a bougie bookseller and frustrated writer, and Rauscher’s every move speaks volumes, both nuanced and revelatory, comic and aggrieved. One can’t help but see in him the languid elegance of Alan Rickman mixed with an impish Tim Allen vibe. He strikes levity merely by planting his derrière into the bergère (fancy French chair).

Claude’s sidekick, Albert, a dabbler in common-man art, represents the proletariat in his rented suit. But Wright creates the most lovable character onstage — a teddy bear who serves as a runway for the others lost in the fog. He’s the translator for feuding couples, a buffer zone, until he must confront his own ex and (hilariously) gives her the silent treatment.

At one point, Wright and Rauscher are gobbling hors d’oeuvres at the Drink Cart when shades of Abbott and Costello emerge. Wright even riffs on Who’s on First? in a nervous volley with Mariette (Elizabeth Keith), the first bachelorette introduced, who inadvertently steals his heart.

While these two gents stoke most of the laughter, real tears flow at the tenderest moments. As Yvonne, Albert’s splintered better half, Ann Brodnax taps a deep emotional well to flesh out a portrait of a woman who’s both sex symbol and innocent, akin to Betty Boop, but whose liberation from the bonds of marital service and adoration help her stand on her own — in impossibly tall spike heels.

Costume Designer Farrell Hartigan’s wardrobe choices help define each character while enhancing the actors’ best qualities. Brodnax’s mod, mustard mini displays showgirl sizzle, with oversized tear-drop earrings that scream individuality. Andre (Charles “Charlie” Boone), who made his fortune in retail clothing, is dapper, with any deceit well disguised. The reason for klutzy Albert’s big honkin’ pocket square soon enough becomes clear. Mariette, a successful writer who blithely batters her ex’s fragile ego, delivers an air of strength in an elegant black pantsuit and looped chain belt, jangling like money. And the bombastic Gabrielle (Carla Crawford), a master manipulator, presents in a showy red-hot split-view, form-fitting dress. Though Crawford seems to make her grand entrance again and again, playing a bit too much to the audience, she stirs the pot with a solid, satisfying performance.

Still, putting strained marriages through the strainer means The Dinner Party’s laughs eventually peter out. And it’s time to get real with whoever is in your own party. Because believing that a night of rumination can sop up the runoff of regret is a farcical notion indeed.

Running time: 1 hour and 45 minutes with no intermission 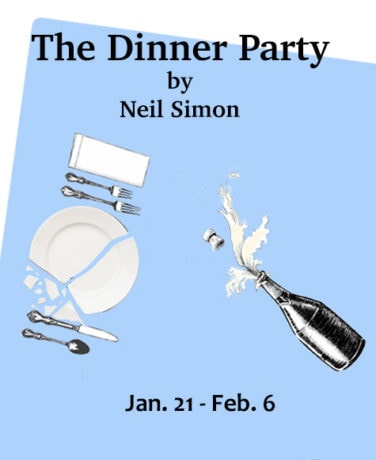 The Dinner Party plays through February 6, 2022, presented by Vienna Theatre Company performing at the Vienna Community Center — 120 Cherry Street SE, Vienna, VA. Tickets are $15 for general admission seating. Purchase your tickets at viennava.gov/webtrac, in person at the Vienna Community Center, 120 Cherry St. SE during open hours, or at the door, if available. You can mail vtcshows@yahoo.com for any questions.

COVID Safety: VTC will comply with official COVID regulations that are in place at the time of performance. Currently, the Town and VCC encourage everyone, both vaccinated and unvaccinated, to wear masks in indoor public settings (required for ages 2–17).