It’s 1912, and guests at an intimate dinner party, including a world-famous magician, have gathered for a private séance. Will the otherworldly exploration reveal secrets of life and death, or debunk the illusions of mediums and spiritualism? Find out in the world premiere of Ectoplasm, written and directed by Sara Fellini and presented by the self-described “makeshift, skin-of-your-teeth, ad hoc” spit&vigor theatre company, in residence at Off-Broadway’s The Players Theatre.

Along with the central supernatural focus (which includes not only séances, but the drinking of blood, a ghostly apparition, and the eponymous ectoplasm – a viscous substance that an entranced medium supposedly exudes as the material for the manifestation of spirits), a lot is going on in the real world of this period piece. There are references to such actual historical figures as Lord Byron and Harry Houdini, and to the forward-looking issues of gender, class, sexual attraction and identity, and the pangs of a guilty conscience over duping the gullible grief-stricken believers desperate for contact with their departed loved ones. It all comes out in the characters’ conversations and confrontations, and in the climactic appearance of an uninvited guest.

The cast features Jillian Cicalese as the gifted (or is she duplicitous?) medium Sara Marshall (“Sara without an h” – presumably self-referencing Fellini’s own first name and spelling); Caitlin Dullahan-Bates as her spiritualist partner and friend (or is she just an assistant and more than a friend?) Kaye Schultz (who questions the ethics of what they do and decides to quit the business); Florence Scagliarini as the evening’s “Byronesque” hostess Mme. Francine Montfort (who, like Byron, is a poet with a deformed right foot and an openly libertine attitude towards sexuality, and, as with Kaye, has a romantic attraction to Sara); and Adam Belvo as Ira Orinthall, the Houdini-inspired illusionist determined to prove that the conjuring of spirits amounts to nothing more than “cruel parlor tricks.”

Comic relief is provided by the perfectly deadpan Drew Reilly as the sarcastic butler Callum Holes (who rails against the latest trend in cocktails and insists on being called Mr. Holes, not Callum, since being promoted by the Madame for clearly more than his household staffing services). Rounding out the ensemble are Sophia Radix as Ira’s suffragist wife Annette; Nicholas Thomas and Raina Silver as George and Miska Crookes (guests at the séance with a personal interest in the occult – he’s a paranormal scientist and she is a devotee of blood rituals); and Federico Mostert as the mysterious stranger Elisha Kane (whose name and face George recognizes from past news clippings).

The actors – some of whom are multi-tasking members of the non-profit company – are supported by an antique-furnished set (by Scagliarini, who also designed the sound) and clothing and props that evoke the era (by spit&vigor’s resident costume designer Claire Daly), with spooky lighting (by Chelsie McPhilimy) and fight choreography (by Belvo).

Though the disparate threads and loose strings of this one-act work could use some tightening for a more cohesive narrative and conclusion, Fellini raises some interesting points that are as unsettled today as they were during the era in which Ectoplasm is set. 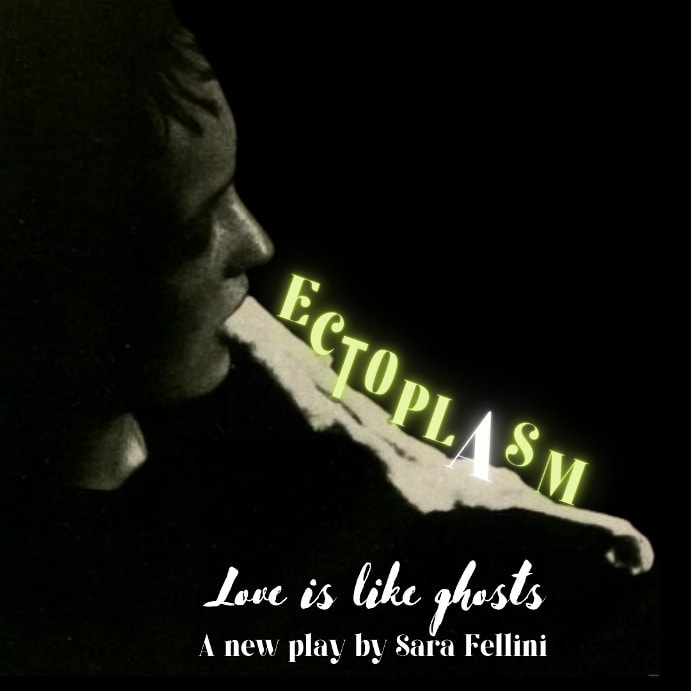 Ectoplasm plays through Sunday, February 6, 2022, at The Players Theatre, 115 MacDougal Street, NYC. For tickets (priced at $52-99), go online. Everyone must show proof of COVID-19 vaccination to enter the building and must wear a mask at all times when inside.