Audible Theatre’s new stage production of Eugene O’Neill’s 1957 Tony Award- and Pulitzer Prize-winning American classic Long Day’s Journey into Night – a thinly-fictionalized autobiographical drama (which the playwright wrote in 1941, but never wanted to be performed and would not allow to be published before his death in 1953) – is the subject of an updated contemporary interpretation by Tony-nominated director Robert O’Hara. Now playing a limited five-week engagement at Audible’s Minetta Lane Theatre, the condensed present-day reimagining was inspired by the dramatic events of 2020, from the pandemic to the Black Lives Matter movement and the divisiveness of the Trump administration, while retaining O’Neill’s inherent themes of drug and alcohol dependency, familial dysfunction, and mental health.

Here, the four members of the Tyrone family – parents James and Mary, and adult sons Jamie and Edmund – are living together once again at their seaside home, under COVID-19 lockdown. She has just returned from treatment for her narcotic addiction, which, the men are concerned, hasn’t worked. James, a formerly acclaimed actor whose career was stymied after his one big defining hit, drinks heavily and, though wealthy, is miserly, always opting to pay for the cheapest medical care available to his family. Their sons, berated as failures, have picked up the heavy drinking habit of their father. Jamie lacks ambition, spending what money he has on alcohol and whorehouses, and Edmund, an aspiring poet, is awaiting the diagnosis from their old family doctor, which his mother doesn’t want to hear and repeatedly dismisses, for a worsening cough that could prove fatal (we’re never told what he’s contracted, though he’s seen in a mask when he enters the house) and will require confinement in the least costly sanatorium chosen by James. (I should note that while the use of such dated language as “whorehouse” and “sanatorium” respects O’Neill’s mid-century writing, they are, for me, inconsistent with the new post-modern resetting).

Though the new production is cut to one act and just under two hours – about half the full running time of the original four-act, nearly four-hour play – the redundancy of the characters’ antagonism, self-destructive behavior, and refusal to change feels interminable (in keeping with the title), as the Tyrones dredge up their long-standing deep-seated conflicts, with no hope for resolution, only an endless daily cycle of lies and denials, anger and resentment, and enabling and co-dependency that pass for an underlying love. After passing out late at night from their incessant substance abuse, we can only assume that, tragically, they’ll get up and do it again, and again, and again, tomorrow, and tomorrow, and tomorrow; our only hope is that Edmund (based on the young O’Neill) is not doomed, but will get the help he needs to survive and to break away.

Under the intense direction of O’Hara, a superb cast delivers the devastating examination of their characters’ psychological pathologies, inner complexities, troubled backstories, intermittent attempts at affection and humor, and belligerent interactions, further fueled by the men’s drinking and Mary’s drug use. As James and Mary Tyrone, Emmy Award nominee Bill Camp (The Crucible) and four-time Obie Award winner Elizabeth Marvel (Hedda Gabler) reveal the reasons for their initial connection and romance, what went so terribly wrong in their lives, and the personality traits that keep them together and relying on one another in an unhealthy ongoing marriage. Jason Bowen (The Play That Goes Wrong) as Jamie Tyrone masterfully embodies the anger, jealousy, and disappointment of his role, along with the physical effects and outspoken admissions of his drunkenness, including his love/hate relationship with his younger brother. And Tony Award nominee Ato Blankson-Wood (Slave Play) captures the physical malady and emotional damage of the sensitive Edmund in a profoundly affecting, empathetic, and sometimes tearful three-dimensional performance that elicits our sympathy and concern for his well-being and the better future we want him to have (and should garner the outstanding actor additional award nominations and acclaim).

The effective artistic design features back-wall projections by Yee Eun Nam that set the year, pre-show, with the top news reports of 2020 from CNN, and illuminate the narcotic-induced anomalies of Mary’s clouded mind (who repeats the metaphor of preferring the fog that envelops the region to the foghorn that sounds to give direction and guidance). Tony Award winner Clint Ramos provides the character-defining costumes (with especially shabby clothing for the penny-pinching James) and a tri-level set, including mounds of pandemic-time delivery boxes and a view into the upstairs window of Mary shooting up. Lighting by Alex Jainchill is dark and gloomy (even when James is asked to turn up the lights, which, to him, only means running up the electric bill), while lapping waves, crying seagulls, and the hated foghorn are heard in the evocative sound design by Palmer Hefferan.

With its deeply disturbing subject matter and committed gut-wrenching portrayals, Long Day’s Journey into Night isn’t easy to watch; if you’re looking for light-hearted uplifting escapist entertainment, this is not the show for you. But if you want a powerful new take on an iconic work, with blockbuster performances by a stellar cast, don’t miss it. As with its previous shows at the Minetta Lane, Audible will record and release the play as an Audible Original, extending its online audio reach to millions of listeners around the world, for those who can’t see it in person in NYC.

Running Time:  Approximately one hour and 55 minutes, without intermission. 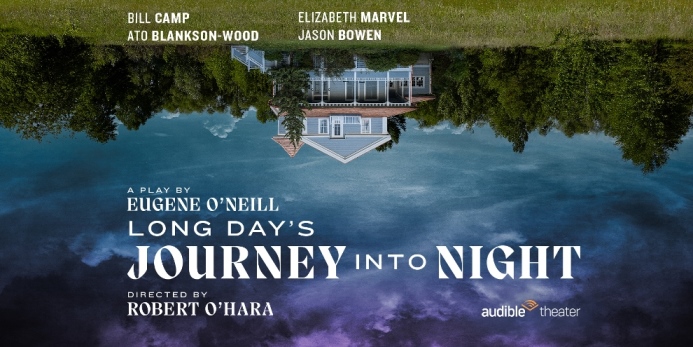 Long Day’s Journey into Night plays through Sunday, February 20, 2022, at Audible Theatre’s Minetta Lane Theatre, 18 Minetta Lane, NYC. For tickets (priced at $67-97), call (800) 982-2787, or go online. Audible Theater requires proof of full COVID-19 vaccinations, including a booster, along with a valid photo ID, before entering the building, and mask-wearing for all employees and audiences inside the theater.