Opening last night on International Holocaust Remembrance Day, the world premiere of the American operatic adaptation of The Garden of the Finzi- Continis by Ricky Ian Gordon (composer) and Michael Korie (librettist), based on the 1962 historical novel by Giorgio Bassani, tells the heartrending go-back story of two Italian-Jewish families in Ferrara – the eponymous aristocrats living on a luxurious walled estate with an expansive centuries-old garden, and that of the middle-class central protagonist and narrator Giorgio – during the rise of Mussolini, fascism, and anti-Semitic racial laws on the eve of WWII. Co-produced by New York City Opera (the company’s 37th world premiere since its founding by Mayor Fiorello La Guardia in 1943, as “The People’s Opera”) and the National Yiddish Theatre Folksbiene, and directed by Michael Capasso and Richard Stafford (who also provided the production concept), the profoundly affecting work, written and sung in English, plays through Sunday, February 6, at the Museum of Jewish Heritage – A Living Memorial to the Holocaust, dedicated to preserving the true historical record and teaching the horrific dangers of intolerance.

Framed by a prologue and epilogue set during the post-war era in 1955, the intimate two-act opera, beginning in 1927, traces the lives and relationships of its characters, from the childhood memories of Giorgio (with the main narrative focused on Giorgio’s unrequited love for Micòl Finzi-Contini, and her brother Alberto’s for their friend Giampi Malnate – a parallel to their love for a country that no longer loves them), through the growing social restrictions and personal impact of Italy’s alliance with Nazi Germany a decade later in 1937-39, to the devastating reality of the deportation of Italy’s Jews to German concentration camps in 1943 (including 183 from Ferrara). Though the wealthy titular conservative republican family believed they could evade the threat in the haven of their beautiful garden, they soon discovered that they, too – like the many others who convinced themselves that the hateful movement would soon pass – became victims of the unimaginable racial discrimination and inconceivable atrocities of the outside world.

Conducted by Maestro James Lowe, a fifteen-piece orchestra delivers the increasing dissonance of Gordon’s score, in keeping with the dramatic subject, which contrasts with passages of a harmonious Jewish congregation at their targeted synagogue, melodious shoppers and vendors on the Rialto in Venice expressing their belief that “beauty never dies,” and the upbeat jazz-inspired music and dance of the former male classmates (prior to the exclusion of Jews from Italian schools) enjoying the popular records of the Big Bands.

The cast is led by tenor Anthony Ciaramitaro, in an emotionally expressive performance as Giorgio (whose father was an early proponent of Mussolini), and soprano Rachel Blaustein, making a stellar NYCO debut as Micól (who senses the doom and the likelihood of being the last in the long Finzi-Contini line), with baritones Brian James Myer as the stricken Alberto and Matt Ciuffitelli as the often-duplicitous Malnate. They are supported by Mary Phillips and Franco Pomponi as the concerned parents, and the company of  D’Marreon Alexander, Robert Balonek, Adam Cioffari, Peter Kendall Clark, Dani Goldstein, Spencer Hamlin, Kristee Haney, Rebecca Hargrove, Sarah Heltzel, Adam Klein, Meredith Krinke, Melanie Long, Violet Paris, Gabe Ponichter, Sami Sallaway, Drew Seigla, Markos Simopoulos, Rosy Anoush Svazlian, Tim Roller, and Rachel Zatcoff.

A minimalist scenic design, with set and projections by John Farrell, establishes the changing locales through images projected on plain white panels. Lighting by Susan Roth sets the times of day and the moods of the scenes, and costumes by Ildikó Debreczeni define the characters, their socio-economic classes and political affiliations (from the identifying yellow armbands Jews were forced to wear to the uniforms of the National Fascist Party’s Black Shirts), and the increasing gloom of the times, as the overall tone and palette switch from summery white to dark and dismal wintry colors. And diction coach Lucy Tucker Yates provides running supertitles above the center of the stage, for both the predominantly English-language lyrics and those sung in Hebrew and Italian.

Although there are some unnecessarily extended scenes (among them the ebullient tennis matches of the young friends at the Finzi-Contini tennis court) that add to the length of the production, the historically based opera remains a timely story and a lesson that, unfortunately, still needs to be taught today, with the current escalation in hate crimes and anti-Semitic attacks in our country. Never forget and don’t let it happen again.

Running Time: Approximately two hours and 50 minutes, including an intermission. 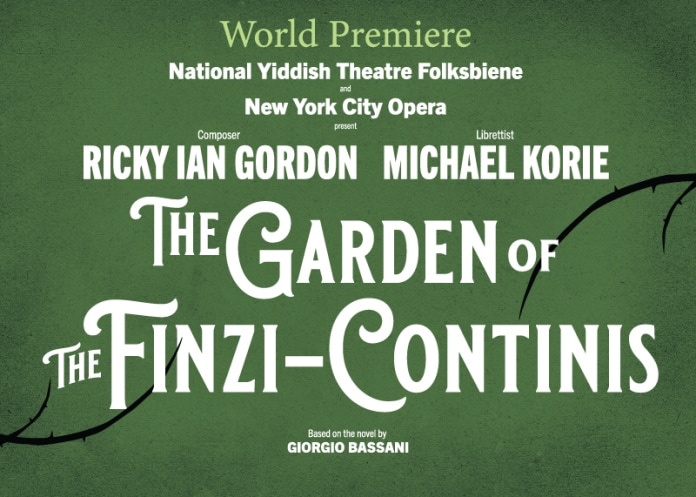 The Garden of the Finzi-Continis plays through Sunday, February 6, 2022, at New York City Opera and the National Yiddish Theatre Folksbiene, performing at the Museum of Jewish Heritage – A Living Memorial to the Holocaust, Edmond J. Safra Hall, 36 Battery Place, NYC. For tickets (priced at $50-125), call (855) 449-4658, or go online. Everyone must show proof of COVID-19 vaccination and a photo ID to enter the building and must wear a mask at all times when inside.