When four adult students enroll in a six-week course to prepare to take the TOEFL (Test of English as a Foreign Language) in 2008 Karaj, Iran, issues arise that lead them and their teacher to examine their cultural roots and true identity. The world premiere of English, by award-winning first-generation Iranian American playwright Sanaz Toossi – playing a limited Off-Broadway engagement at Atlantic Theater Company in a co-production with Roundabout Theatre Company, following its development as part of the 2019 Roundabout Underground Reading Series – is insightful and thought-provoking as it moves from a humorous to a serious look at their motivations and attitudes, how they are viewed by others, and where they belong.

Under the direction of Knud Adams, the tone of the play, at first light-hearted and amusing, becomes increasingly personal, introspective, and troubled, as the skillful cast of five slowly reveals the distinctive positions and thoughts of the characters to one another inside the classroom, during office hours, and outside on breaks. Their journey of self-examination is triggered by the words the teacher Marjan writes on the whiteboard at the beginning of their first session: “English Only.” While her intention is for the students to be completely immersed in the language (as they would be in an English-speaking country or situation), instead it launches them on an identity crisis that also affects her.

The script employs the clever device of having the characters talking quickly and fluently whenever they revert, more naturally and comfortably, to their native Farsi (for which they get a tick under their names on the whiteboard, with five resulting in dismissal from that day’s class). But the actors deliver those passages in fluid English, without an accent, so the non-Farsi-speaking members of the NYC audience can understand what’s being said – until they don’t. And when they don’t, it elicits even more understanding and empathy for the struggles people face in learning and fully comprehending a language that’s foreign to them, often with the intent of relocating to a different country and an unfamiliar culture.

Led by Marjan Neshat as the instructor Marjan (who lived in Manchester, England, for nine years, before returning to her homeland, for reasons that are not quite clear to her), the engaging cast captures the unique personalities of the individual students, whose ages range from eighteen to 54, as they undertake assignments and participate in classroom exercises designed to increase their proficiency and to enable them to pass the required test. Through show-and-tell presentations, fast-paced rounds of word games, role-playing, listening to and being questioned about audiotaped stories, practicing the pronunciation of the difficult letter W, one-on-one conversations, and group dynamics, they give glimpses into their backgrounds and their reasons for enrollment, with developments that are sometimes unexpected and results that are profoundly cathartic.

Ava Lalezarzadeh is both effervescent and diligent as the young Goli, who loves English and is excited about the opportunity it will offer her. Pooya Mohseni as Roya, the oldest of the students, hopes to move to Canada to be with her emigrant son Nader (now going by the name of Nate), wife Stephanie, and granddaughter Claire; her portrayal is mature and understated in relaying the deep disappointment she feels. In his role as Omid, the sole male in the class and the most expert at English, Hadi Tabbal is charming with the teacher who clearly favors him, is sometimes insulting to his fellow students, and is harboring a secret that is finally uncovered. And Tala Ashe, as the outspoken and combative Elham, espouses her hatred of English, contempt for those who would choose to abandon their own language, and humiliation at her own heavy accent and slow progress in speaking (though her reading and writing are excellent). Will she and the others complete the course and pass the test? Or will they reassess their goals and purpose?

English provides an intimate account of the complexities of language as a significant aspect of the immigrant experience, self-identity, and the quandary of sacrificing one’s own voice, with a talented cast and team that brings it all to life for our present times.

Running Time: Approximately one hour and 35 minutes, without intermission. 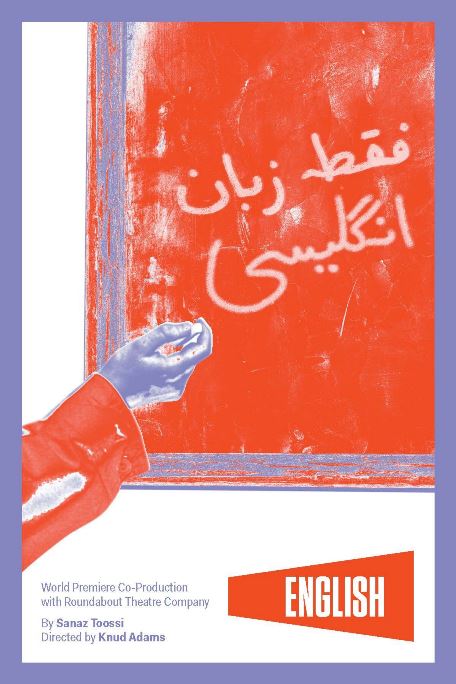