It’s fascinating to learn how media and TV’s top names and franchises got their start. If you’re a fan of the Netflix TV drama The Crown, you should study up on creator and showrunner Peter Morgan’s The Audience, a 2013 play centering on Queen Elizabeth’s weekly meetings (i.e. “audiences”) with nine prime ministers over the course of her reign. Luckily, the British Players have you covered.

As Peter Harrold recently told DC Theater Arts, The Audience was one of Morgan’s early experiments — produced right after his film The Queen, which earned star Helen Mirren an Oscar — with interpreting and staging the British royal family’s affairs.

As Harrold described it, “If you look very carefully, there’s some fine print when The Crown starts. It says, The Crown by Peter Morgan, and there’s a little footnote that says, based on the play, The Audience. The Crown follows the same time period as The Audience, starting from the beginning of the Queen’s reign… Many of the individual scenes from the play were imported word for word into [The Crown]. I could think particularly of scenes with Winston Churchill, Mrs. Thatcher, David Cameron, and perhaps most explicitly, Anthony Eden, that are just word-for-word. And why not? He wrote them very well the first time, so why not use them a second time?”

So come see The Audience if you love stories about the British royal family, immersive performances, The Crown, and/or studying the creative evolution of one of television’s most beloved and successful storytellers.

The British Players, a troupe dedicated to bringing classic, traditional British theater from the Victorian era to the modern-day, have operated in the DC Metro area since 1964. The British Players’ current production of The Audience was originally intended to open in March 2020 right as the pandemic struck.

This production stars Elizabeth Keith as Queen Elizabeth, who delivers a deeply impressive performance. Keith’s Queen, depicted at multiple distinct periods of her life, is rather unemotive, operating emotionally at times within the confines of the stiff expectations of her character. While you might think an emotionally stiff main character could be a major issue for the show, the play ultimately serves to demonstrate how the Queen changed — and was changed by — her Prime Ministers over the years, who are each depicted as distinct, often comic, and occasionally wise.

Winston Churchill is performed with tremendous skill by Jeffery Westlake, who not only embodies Churchill’s character but also executes a tastefully understated vocal impression of him. It would have been easy to go over the top in a Churchill impression, as so many are tempted to do, but it seems that Westlake has perhaps unwittingly followed Dana Carvey’s age-old wisdom on doing an impression — nailing the vocal impression isn’t the most important part of an impersonation, but rather, the feeling and characterization of the figure must ring true in the consciousness of the audience.

In The Audience, Churchill enters Queen Elizabeth’s life at a time of vulnerability — so it’s all the better that his entrance is lovingly celebrated by director Peter Harrold through a Hitchcock-esque silhouette against a glowing lit background, backed by a majestic score quite befitting of the character. Westlake’s Santa Claus-esque grandfatherly aura and kindly wit introduced in the play’s early scenes are a comforting initiation for both Queen Elizabeth in her story, and the audience to the show — Harrold gifts the audience with a lovely introduction to Peter Morgan’s interpretation of history with a well-known character.

The stage is lovingly decorated with knick-knacks wonderfully becoming a Buckingham Palace meeting space. Between scenes staged in different locations, stagehands take time to replace a few major items in the space, indicating both the passing of time and also how much attention Harrold paid to the small things.

A note about the (uncredited) set: The enormous doors at the center of the stage and the molding around the room are painted in a bright reddish-mahogany in contrast to the lighter, creamier colors of the rest of the room. Especially given that the two “audience” chairs where so much of the play takes place are placed at the center of the stage, right in front of the doors, the bright red colors overpower the quieter-hued room and the actors in front, preventing characters from becoming the effortless visual focal point they should be. Even Queen Elizabeth’s occasional wardrobe choices with surprisingly vivid color — her turquoise jacket sticks out in my memory — begin to feel cheap against those doors.

One deeply impressive production stand-out element is Queen Elizabeth’s rapid change of costumes and wigs (uncredited). During each switch, Keith has lines to deliver, which she impressively does free of any hassle or bustle in her voice or mic scratches.

One small critique: of course, it is difficult to replace and affix a wig firmly with little time under live pressure, but the Queen’s wigs occasionally do not blend in well with her skin; and the darker ones used in scenes from the Queen’s early years appear less lovingly styled and authentic than the grayer, curlier wigs of her later years. While Keith portrays remarkably whatever age she is playing, the lack of wig authenticity in some moments can occasionally break the suspension of disbelief.

Some of the show’s biggest selling points are its loving depictions of a rogue’s gallery of Prime Ministers, particularly Harold Wilson, whose personal battles at the core of the play’s emotional climax become a central struggle for Queen Elizabeth by extension. She learns the importance of empathizing with those she works closely with, in a job that denies her the ability to emote in the vast majority of arenas. Peter Harrold and co-producers Chrish Kresge and Caroline Gelb stage a play exploring the humanity of our leaders, and demonstrating how important indeed that humanity is. Especially in an era when cynicism for government is all too common, The Audience is a triumphant reminder to us, the audience, to remember the humanity of those behind the thrones. 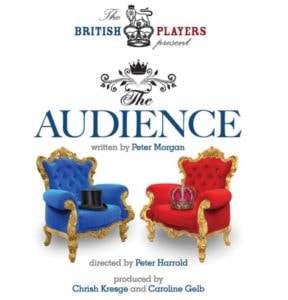 COVID Safety: All attendees aged 2+ must wear a KF-94, KN-95, or N-95 mask at all times when inside the venue unless actively eating or drinking in their assigned seat. The British Players’ complete Health and Safety and COVID-19 policy is here.

SEE ALSO:
An audience with Peter Harrold, director of ‘The Audience’ for British Players (interview by Chrish Kresge)