Following an extended pandemic delay, the highly anticipated production of Harmony: A New Musical, written by multi-award winner Barry Manilow (music and arrangements) and longtime collaborator Bruce Sussman (book and lyrics), has finally arrived – nearly 25 years after its premiere at San Diego’s La Jolla Playhouse in 1997 – at the perfect location in NYC, within viewing distance of the Statue of Liberty, for a limited seven-week Off-Broadway engagement. Presented by the National Yiddish Theatre Folksbiene (NYTF) at the Museum of Jewish Heritage – A Living Memorial to the Holocaust, the slightly fictionalized real-life story offers a timely reminder of the personal toll taken by unimpeded hatred and bigotry and the timeless need to take a stand against encroaching atrocities before it’s too late.

Based on the true story of the long-forgotten Comedian Harmonists – one of the most successful musical acts in pre-WWII Germany (later the subject of a four-hour 1975 black-and-white TV documentary, a book by Professor Peter Czada, Curator of The Comedian Harmonists Archive, and the 1997 German film Comedian Harmonists, released in the United States as The Harmonists) – the tone of the show slowly shifts from funny and melodious to frightening and heart-wrenching, as it traces the short history of the popular sextet, which performed to international acclaim on stage, screen, and recordings from 1928-34, before the Nazi regime put an end to the half-Jewish half-Gentile group.

The musical is presented in the format of a memory play, as the aged narrator “Rabbi” – one of the former Harmonists – recalls and reflects on the people and key moments in his go-back story, sometimes embracing and sometimes confronting his younger self. He introduces us to the singers, each with a unique personality, background, and voice, as they arrive individually to audition for Harry, the group’s founder, in 1927, then follows them through their rise to fame, dramatized scenes of romance and marriage, signature performances at iconic venues in Europe and the US, and encounters with some of the most notable figures of their era, to the increasing restrictions and persecution they faced under Hitler’s Third Reich, and what became of each of them in the aftermath.

Directed and choreographed by Tony Award winner and Emmy nominee Warren Carlyle, the show and its large cast deliver the rich six-part vocals and physical comedy for which the group was known, along with the entertaining mix of old-fashioned humor, youthful high energy, and serious pathos. And Manilow’s score features a mood-appropriate variety of styles, from the sextet’s central harmonies and vocal (and mimed) imitations of musical instruments to romantic ballads and traditional Jewish threnodies, with orchestrations by Doug Walter and John O’Neill serving as music director, additional vocal and music arranger, and conductor of the resonant nine-piece orchestra.

Chip Zien stars as “Rabbi” and presents not only the facts, dates, and events in his retrospective commentary, but also brings the surprises and laughs (and a few flubbed lines on the date I attended), with his unexpected appearances as several of the historic figures he recalls (male and female), capturing a range of feelings in his over-the-top parodies, traditional Jewish ceremonies and laments, and his character’s guilt over not having taken action against Nazism at the time.

Playing the six Comedian Harmonists are the excellent and tuneful Zal Owen (Harry), Danny Kornfeld (Young Rabbi), Sean Bell (Bobby), Eric Peters (Erich), Blake Roman (Chopin), and Steven Telsey (Lesh). Each portrayal is distinctive, each voice, from falsetto to bass, is full and commanding, and every group harmony and dance is thoroughly engaging and exciting (“How Can I Serve You, Madame?” is especially lively, bawdy, and amusing, and “Hungarian Rhapsody #20” is a witty take on a follow-up to Franz Liszt’s original nineteen), as they come together, express their support of one another, disagree and battle, enjoy their burgeoning celebrity, and ultimately are forced to disband, then lose touch after the Nazi threat.

There are also subplots of the men’s relationships with two women and the impact of Germany’s growing anti-Semitism on them. Sierra Boggess brings her exquisite soprano and heartfelt emotions to the authentic role of Rabbi’s wife Mary, who is not Jewish, highlighted in her expressive solo on “And What Do You See?” Jessie Davidson plays the composite character of Chopin’s wife Ruth, who is Jewish, proud, and outspoken (and with whom, the program acknowledges, the creators took artistic license). She and Boggess sing a sentimental duet on “Where You Go” (set in 1935 Cologne, when their husbands must decide if they should remain in Germany or leave the country in search of safety), and although their performances are strong and compelling, and bring a tone of intimacy to the increasing terror, they lengthen the show and add an unnecessary note of fiction to the otherwise true narrative. In fact (as also noted in the program), some of the Harmonists were married several times, and one of the more dazzling production numbers, of a performance with the legendary Josephine Baker (well played by Ana Hoffman), laughingly alludes to the men’s womanizing.

The cast is supported by an effective artistic design, with eye-popping period-style costumes by Linda Cho and Ricky Lurie, and wig and hair by Tom Watson. Beowulf Boritt’s mostly bare-stage minimalist set makes for efficient transitions from scene to scene, with momentous background videos by batwin + robin productions, inc., sound by Dan Moses Schreier, and lighting by Jules Fisher and Peggy Eisenhauer that bring Rabbi’s memories to life and place them in the proper historical context.

While Harmony fulfills NYTF’s mission of dramatizing the Jewish experience and the Museum’s commitment to educating diverse visitors about Jewish life before, during, and after the Holocaust, it also provides a universal reminder to stop the rampant hatred and violence and to enjoy the beauty and creativity of the arts and entertainment together in consonance. It’s a great experience and a great message. 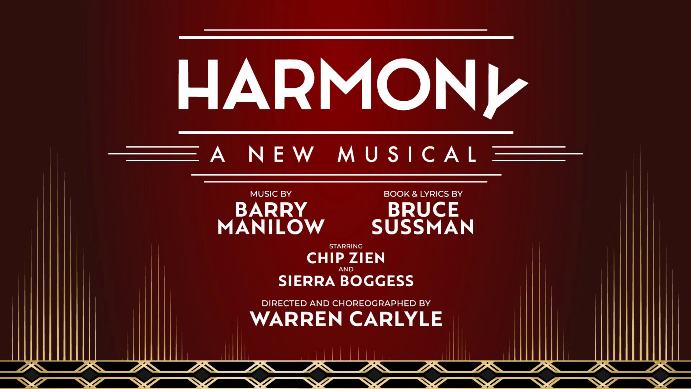 Harmony plays through Sunday, May 8, 2022, at National Yiddish Theatre Folksbiene, performing at Edmond J. Safra Hall at the Museum of Jewish Heritage – A Living Memorial to the Holocaust, 36 Battery Place, NYC. For tickets (priced at $79-129), call (855) 449-4658, or go online. Everyone must show proof of COVID-19 vaccination and a photo ID to enter the building and must wear a mask at all times inside.