Spring was in the air on the evening of the Shakespeare Theatre Company’s Mock Trial, and our thoughts turned to love, or rather, the fantastically unpleasant things that can happen when love goes wrong enough to end up in a courtroom. At issue was a legal dispute between Margaret and Hero of Much Ado About Nothing. Fortunately, the jokes were fast and furious, the arguments state-of-the-art, and the verdict a tribute to Shakespearean justice.

This evening’s event was STC’s 35th Mock Trial, noted Moderator Abbe David Lowell,  Board of Trustees Vice Chair and Chair of the Bard Association, in his gracious introduction. He congratulated everyone on being back in the theater and better than ever!

Special Guest Simon Godwin, Artistic Director of the Shakespeare Theatre Company, was set to appear while the verdict was being decided.

We learned that Hero, the daughter of the governor of Messina, has been the victim of a dastardly plot. On the brink of Hero’s marriage to Claudio, the good-looking but puerile Count from Florence, the wicked Don John staged a tryst between his follower Borachio and Margaret, Hero’s attendant. Margaret, disguised as Hero, was discovered by her credulous lover in the embrace of Borachio. Hero sued Don John for defamation. Don John, Borachio, and Margaret were charged with conspiracy. Margaret was held liable for conspiracy and aiding and abetting.

The trial court entered a default judgment against Don John, and Borachio accepted the summary judgment he received. Margaret contested all claims against her and appealed to Italy’s highest court. At issue are (1) whether the trial court clearly erred in concluding that Margaret was a co-conspirator and (2) whether the evidence sufficiently supports the trial court’s conclusion that Margaret knew enough about Borachio’s and Don John’s plan to be liable for aiding and abetting. Margaret appealed to the Supreme Court of Cassation.

Margaret’s Counsel of Record, Second Gentleman Douglas Emhoff, asserted that she knew nothing of the plot. He represented “good Margaret” with an unpretentious charm that would have won the votes of any jury, had one been onstage.

Supreme Court Justice Stephen Breyer, presiding, interjected, with a smile that gave it all away, “But what was she wearing? That’s the important thing.” Emhoff opined that there wasn’t much to do then, no infrastructure, no Netflix and chill, so she probably wore whatever people wore then to have fun. “Good Margaret,” as he called her, “needed my help.” He portrayed her as a working-class individual, devoted to her mistress Hero, who has been made to suffer, and who had nothing to gain from Hero’s fall from grace.

Emhoff’s brief cites such notable authorities as Hamilton, An American Musical, Kenneth Branagh’s Much Ado About Nothing, and eight plays by Shakespeare, including Twelfth Night, Hamlet, and Macbeth (the Scottish play).

Justice Breyer asserted that Margaret was merely exercising her right to have a fake boyfriend. “Did she have a good reputation?” he asked. “Was she legally blonde?”

Debra Katz, Counsel of Record for the Respondent, Hero, argued, with passion and precision, that Margaret helped to orchestrate a Big Lie, and violated the sacred unwritten “Girl Code” governing female friendships. Margaret’s encounter with Borachio was “a false flag operation.” Katz noted in her brief that false flag operations were in vogue during a very dark part of Messina’s history, flamed by the would-be 45th Prince of Aragon and his operatives Sir Rudolph Giuliani, Sir Roger Stone, Sir Steve Bannon, Dame Kellyanne Conway, and the would-be Prince’s children, putative heirs to the throne. Even when present during attacks on Hero’s good name, Katz declared, Margaret did not stand up for her.

The questions ranged over a broad range of subjects: “How do you define the word woman?” “Why didn’t she write a self-exonerating book?” “Who is better at Wordle?” “Can I use one of my lifelines?”

Other questions included “Are we in the right court?” “Where is Will Smith now that we need him?” “Why couldn’t she have a fake boyfriend?” And the inevitable “What about the seven-hour gap in the phone records?”

Simon Godwin discussed the new season at STC. The Notebooks of Leonardo da Vinci, which features the return of Mary Zimmerman (Candide, Pericles); The Jungle, in collaboration with Woolly Mammoth Theatre Company, which brings the audience into the culture of a refugee camp; Godwin’s Much Ado About Nothing, which takes place in a TV newsroom; King Lear, with STC favorite Patrick Page; and Goddess, a new musical inspired by the African myth of Marimba. He emphasized the way classical art, including theater, can speak to us today.

The audience was included in the final decision, which included a powerful dissent in favor of Margaret. It seems that, although there is not always justice in the legal system, there is, sometimes, justice in Shakespeare. Or is there? 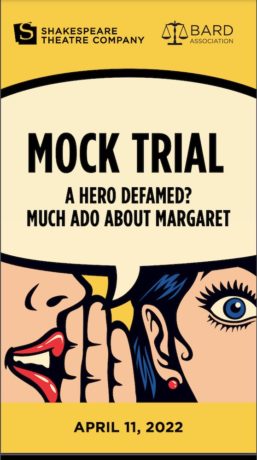 << The digital program for the evening is here.