The preshow soundtrack bears a distant resemblance to the theme from Friends. And like that hugely successful TV sitcom, Erica Smith’s charming new play Fiveplay is set in the shared household of an assortment of idiosyncratic personalities in their twenties. But there the similarity ends, because the housemates of Fiveplay are all polyamorous, which one of them helpfully explains early on, in an amusing teach-the-audience scene:

AVERY: Polyamory is being involved in multiple committed relationships at once with — and this is the most important part — the full consent of everyone involved. Also referred to as a form of ethical nonmonogamy. I’m gonna repeat that: ETHICAL nonmonogamy.

Someday some smart TV producer is going to notice the zeitgeist is ready for a sitcom based on this provocative premise — it’s only a matter of time, what with the heteronormative gender binary on the wane. Perhaps that polyamorous reimagining of Friends will be inspired by Fiveplay, who knows? In the meantime, there are two more chances next weekend to check out this inviting show of possibility for character-driven polyamorous playmaking.

The tricky thing is — as I discovered at the very beginning of the Coil Project production amiably directed by Sean Butler — that when the cast of characters is polyamorous, keeping track of who’s having relations with whom can get complicated. So you’ll thank me, when you see Fiveplay, for this handy color-coded diagram.

One of the most interesting things about Fiveplay is what it’s not. There’s a lot of situationally appropriate hugging, kissing, and other casual affection and a lot of banter about an upcoming special event (a house orgy they call Fucksgiving), but no clothes come off, there are no sex acts, and nobody objectifies or body-judges anyone else. The actors who very capably play the five polyamorous characters — Brianna Goode (as Ray), Eric Jones (as Sawyer), Michael Silver (as Monty), Christine Smith (as Avery), and Rebecca Rose Vassy (a strong-willed stand out as Emerson) — and the sole character not coupled — Rocky Nunzio (as Keegan) — live in the moment in their interrelationships as if nothing at all out of the ordinary is going on. It’s simply their chosen everyday family, they are refreshingly at ease in it, and the eroticism between them can be sweetly funny, as in this exploratory exchange (not yet diagramed above):

When during the course of the play dramatic conflicts arise, it’s never about jealousy or betrayal or any stereotype one might have about these people’s multiple sex-partnering. Instead, it’s tensions and incursions from outside — such as an antique suspected of being haunted, the curtly texted news of a beloved grandfather’s death, the antipathy of offstage parents — all episodes that while not particularly earthmoving nevertheless illustrate how the premise of polyamorous housemates could well be deployed in a pilot.

The sound design by Sean Butler effectively suggests a rainstorm during a sequence when a ghost may or may not be present, at which time the lighting design by Jason Aufdem-Brinke also backlights everyone in an ominous blue. The uncredited set looks credibly lived in — a worn sofa, mismatched tables and chairs, pride flags and queer bric-a-brac all about. The uncredited costumes have the fascinating specificity one would expect of an intuitive designer’s hand but instead likely came from the director and actors’ apt insights into the characters.

High budget and polished this production is not. But the forward-looking creative concept, the intriguing character delineations, and the vision of ethical eroticism make Fiveplay well worth a trip to the black box at Capitol Hill Arts Workshop. 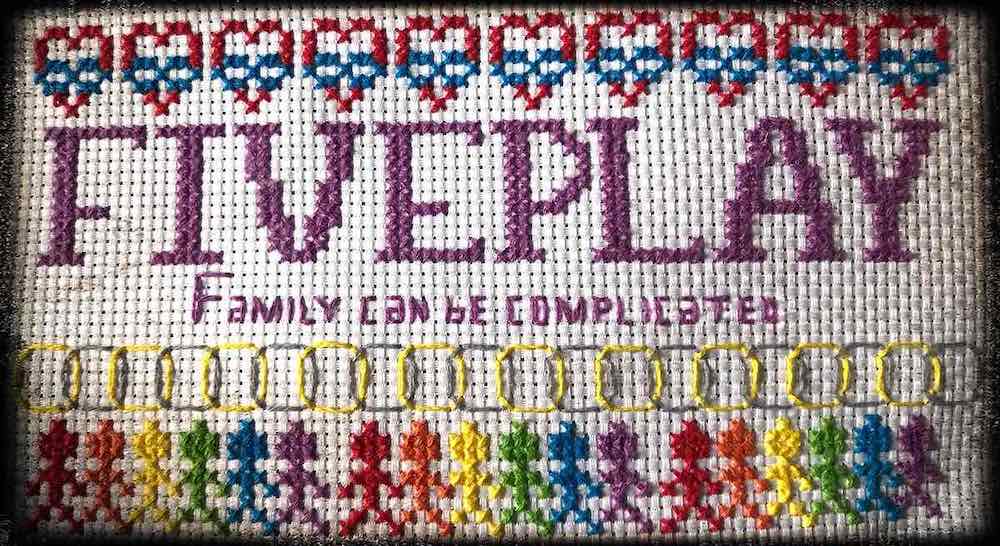