There’s not a hard line between what we call “nightlife” and what we call “theater” — the one is centered on going out socially, typically where there’s drink and live entertainment; the other is centered on going to a live performance that usually involves storytelling. COVID quashed both, of course, and local nightlife and theater are still recovering from that catastrophe; but this present time of great transition and hopeful restoration prompts a fresh look at the intersection between the two. For although nightlife and theater are different, they are not divided; they are related like two circles of a Venn diagram. And where they overlap is a hybrid of artform and night out that doesn’t really have a name and is hard to define. Except you’ll know it when you see it at the captivatingly attractive AirOtic Soirée.

Billed as “a sexy acrobatic circus show,” AirOtic was conceived and developed by husbands Stephane Haffner and Kyle Kier. Borrowing from both circus and burlesque and committed to LGBTQIA+ representation, the production debuted in 2016 on a gay cruise and has since toured the EU, appeared on several cruise lines, and is now touring the U.S. as AirOtic Soirée in various venues and iterations. A version featuring four topflight aerialists and acrobats is playing in town through June 12 at Hook Hall, an industrial-style event space that could pass for a cavernous black box — except it contains a fully stocked bar.

The night I was there, the nightlife vibe was in the air. Surrounding a thrust playing area was a semicircle of seating, VIP sofas up front, folding chairs further back, with unobstructed sightlines all around. A very diverse young crowd — predominately straight and on dates, near as I could tell — packed the place. They were abuzz, there to socialize and have a good time. Hand-crafted drink specials from the nightclubby bar were everywhere being imbibed. It was the sort of eager DC-is-in-the-house audience that is coveted by just about every local theater I know.

There was a pre-show teaser as cast members paraded solo in ostentatious costume — one swaggered around runway style in glittery jacket, see-through skirt, thigh-high boots; another swung on a trapeze in a billowing puff of pink boa; another stalked the space on stilts outfitted in big blue petals (Stephane Haffner and Florante Boyer designed the costumes). All that gorgeous gaudy garb and up-close posing was not only fun to look at; it foreshadowed that the artists would likely be wearing much less later. Their thongs were the tipoff.

Heightened stage lighting and the driving sound system started to sync as the show kicked off (the entire production was directed and choreographed by the couple Kyle Kier and Stephane Haffner; Kyle Kier designed the sound and lighting): Three aerialist-acrobats, two men and a woman, climbed one of the three red silks suspended from the ceiling. There they executed in choreographed triplicate a stunning routine of spins and splits, dangles and drops, and other anti-gravity acts of grace. By now, the costuming was minimalist, and a new narrative had begun: stories told in visual beats by very visible bodies.

I began to notice this narrative dimension during the first of several numbers performed by two men (Kyle Kier and Miguel Angel). This one involved a long pole hung by a chain that functioned between them as apparatus for a transfixing air duet, combining sheer strength and great tenderness, musculature and sensation. I became aware that I was watching two acrobats — choreographed by two partners in a real-life marriage — working together near-naked before an audience and exhibiting a kind of reciprocal trust that could not exist in public if it did not arise in private.

This was turning into theater-like personal storytelling in a way I had not foreseen.

Given that each of the four cast members changed costume for every act, there had to have been some intricate and intimate coordination in the tiny curtained-off backstage area. Additionally, during blackouts between acts, the artists all doubled as stagehands, moving set pieces on and off for each other. The show was as steeped in trust and cooperation as it was bathed in sensuality.

The last act was both hot and hilarious. A four-legged bathtub was brought on stage full of water in which Kier and Angel were soon splashing and cavorting. Handstanding on the rim, then diving back in and handstanding again, they were having a grand time. And it was an amazing scene to see: two men playing grown lovers having adult-rated bathtime with the exhilaration and glee of giddy kids. No porny force or fear or pain in sight. Just true trust and pure play.

I can’t think of a story about sex more worth telling than the one you get at AirOtic.

Fever’s FAQs for AirOtic Soirée are here, and the AirOtic website (including performer bios) is here.

COVID Safety: Masks are required within the experience for everyone. 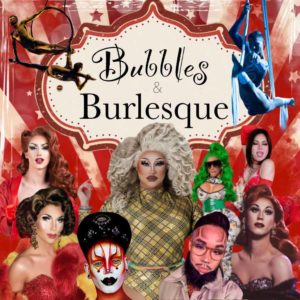 Bubbles and Burlesque — a special weekly show combining the acrobats of AirOtic Soirée and DC drag queens, kings, and other entertainers — performs Sundays at Hook Hall at 1 pm from April 17 to June 11, 2022. Tickets (starting at $55) are available online. Age 21+ only.

Tickets to shows by AirOtic Soirée companies in other cities — currently Puerto Vallarta (led by Stephane Haffner) and Mexico City — are available here.