When does taking violent action in response to bloody tyranny become “terrorism,” and who gets to decide? Tim J. Lord’s “We declare you a terrorist…” takes up those questions in the context of a tragic incident during Russia’s war on Chechnya. In the play, the questions aren’t abstract: they are intensely personal. The resonance of the play with the current war in Ukraine is equally intense.

From 1994 to 2009, Russia brought its full military might to bear on Chechnya, located in the Caucasus region. Russian artillery and bombs flattened the capital city of Grozny. Pictures of Grozny from January 1995 look like pictures of Mariupol today. Many thousands of civilians were killed or fled as refugees.

In the midst of this, the Dubrovka theater in Moscow presented Nord-Ost, a hit Les Mis-scale patriotic musical. In October 2002, 40 to 50 Chechens, armed with guns and bombs, seeking to force Russian troops to leave Chechnya, seized control of the theater during a performance, taking more than 800 actors, crew, and audience members hostage.

After more than two days, Russian forces gassed the theater with a fentanyl-derived compound that rendered most people unconscious. The security forces then shot the Chechens dead. An unplanned, chaotic evacuation followed. Approximately 175 hostages died, collateral damage from the effects of the gas and the botched evacuation.

The play begins a year later in a dingy interrogation room, well-realized in Lawrence E. Moten III’s scenic design. An FSB officer is questioning The Writer (Cody Nickell), a fictionalized version of Nord-Ost’s co-writer and producer, Ukrainian-born Georgi Vasilyev. In Matthew M. Nielson’s sound design, the offstage screams of a prisoner being tortured add to the ominous atmosphere; the room lights flicker as electrodes are applied. The Writer was caught trying to sneak into Chechnya. Why? Was he trying to provide material aid to terrorists?

The Writer was in the theater during the siege, to which the play frequently flashes back. At the core of the play are the relationships he develops there with two young women, Masha (Bekah Zornosa), a teenager who had attended the show with her parents, and Kayira (Ava Eisenson), one of the Chechens. Neither likes the musical (one of the several points of humor in this otherwise deeply serious play). Both are highly intelligent and keen observers of detail. Masha notes subtleties of character in the eyes of The Writer and Kayria, for example.

In Zornoso’s characterization, Masha’s emotions range from teen snark to fear to anger at the Chechens: what has she done to deserve being held hostage and likely killed? She is someone who is easy for The Writer to want to protect and comfort, however helplessly, in a situation in which her fate is in the hands of the Chechens.

Kayira is single-mindedly prepared to kill and die for her people. The Russians killed her husband and other family members. She will not see her young son again. She once had other dreams. Now she has nothing more to lose and looks forward to paradise as a martyr. The Writer talks with her, trying slowly to gain her trust, in the process finding empathy for the path she has chosen and, in turn, earning her respect for admitting that, even knowing what was happening to Chechens, he would have done nothing.

The Writer’s other relationship is with The FSB Officer (Elliott Bales). A large, imposing middle-aged man, the officer is by turns cheerful, manipulative, intimidating, and brutal. He radiates unchecked power. He is above all a nationalist, longing for Soviet days when Russia itself, Ukraine, and Belarus were part of a unified great Russian nation. He sees himself justly fighting against the evil, scarcely human terrorists who attacked his country. He will do what he has to do to defeat them. In this, he is kin to Americans who employed “enhanced interrogation” techniques at Abu Ghraib or various “black sites” in the U.S. “war on terror.”

One of Lord’s signal successes is that in Kayria and The FSB Officer, he gives us two characters who are easy to condemn as moral monsters — a suicide bomber and a thuggish agent — and shows us their humanity, without implying approval. There are no cardboard villains here.

And what of The Writer himself? He endures a dark night of the soul literally underground, in subway tunnels. He comes to admit to himself, and ultimately even to the officer, that he can no longer simply watch from the safety of the sidelines, that he has responsibility to take some kind of action, even if it is quixotic and perhaps futile.

All four actors are fully, believably grounded in their characters. There’s not a false note to be seen.

In the outstanding, quite dazzling, technical achievement of the production, directors Ryan Rilette and Jared Mezzocchi make ingenious use of projections for the theater scenes. Nickell remains on stage, his image projected onto the set via live video. Meanwhile, Zornosa and Eisenson are offstage, their video images projected onto the set as they converse with Nickell.

This device creates clear distinctions between interrogation scenes and theater scenes and ensures rapid transitions, with Nickell never having to leave his position. During the transitions, a projected visual and sound cacophony conveys The Writer’s mind and emotions, affected as they are by a combination of anxiety, survivor guilt, and PTSD. The larger-than-life projected images loom over The Writer, as the events of the hostage crisis loom over his interrogation and his decisions about his future course.

It is impossible to see this play (developed beginning in 2009) and not think of today’s news from Ukraine. Sanctions and military aid notwithstanding, how do we deal with the feelings of futility created by watching the pictures from Bucha or of the mass flight of refugees? Like The Writer, we may ask what we can do. The play is brilliantly written and performed, well worth seeing, but like current reality, provides no ready answers.

Running Time: One hour 45 minutes, with no intermission. 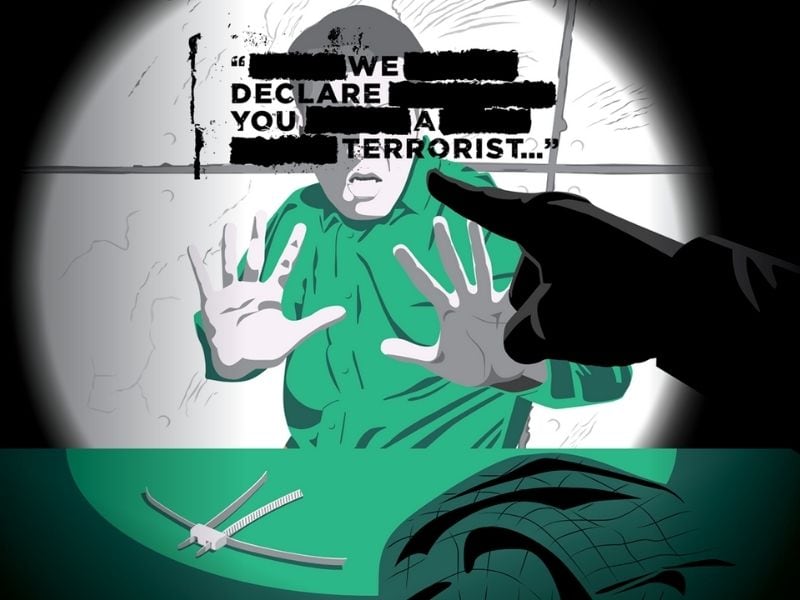 “We declare you a terrorist…” plays through May 8, 2022, at Round House Theatre, 4545 East-West Highway, Bethesda MD, in rep with It’s not a trip it’s a journey as part of the National Capital New Play Festival. Consult the Round House website for performance dates as well as for tickets ($55–$68).

The program book for “We declare you a terrorist…” is online here.

COVID Safety: Patrons must present a photo ID and show proof that they meet the CDC definition of being fully vaccinated at the time of entry to into the theatre. Masks are required for all guests, regardless of vaccination status, except while eating or drinking in the lobby café area. The Round House Theatre complete COVID safety policies are here.