One might think it paradoxical to pair sweeping, decadent elegance with a minimalist, intimate space. You will change your mind when you go see Kentlands Community Players’ Shakespeare in Love at the Gaithersburg Arts Barn.

Shakespeare in Love is adapted for the stage by Lee Hall from the screenplay by Marc Norman and Tom Stoppard, whose 1998 film of the same name won seven Academy Awards, including Best Picture. It depicts a young William Shakespeare as a starving actor and budding playwright who finds himself uninspired and frustrated. He can barely find rhymes, much less ones that fit the mood, and he flip-flops between comedy and drama depending on which word comes to him. He even requires his own muse, Kit (Christopher) Marlowe, who provides him with phrases that serve to get him to the next line, only to require his muse again. This provides humor, irony, and the witnessing of a giant who does not yet know his historical place in the world. Historical note: There are those who believe that Marlowe is ghostwriter for Shakespeare, with rumors rivaling that of a fictional plot.

The Gaithersburg Arts Barn, one of the most intimate and satisfying theater spaces, provides a thrust-proscenium, 99-seat theater that serves as the framework for the set. Director Bruce Hirsch uses the space to its fullest potential. There are flats on either side of the stage to be used later as an innovative pop-up boudoir (kudos to Set Designer Matthew Ratz and Master of Construction Mark Ludder!), providing the french farce of the show, and several cubes that serve any purpose and are expertly reconfigured between scenes by the cast and crew. There is a Juliet-style balcony that sits on the stage, with Shakespeare and Marlowe shrinking down in place to provide the visual of differing heights. There are tables, chairs, and a bar that come on and off quickly and unobtrusively. It is a feat to change scenery constantly while the audience barely notices the transitions; stage manager Charlie Van Kirk kept things running smoothly. Hirsch uses the entrances and exits of the theater as part of the set. The front (and minimally, the back) doors of the theater serve as entrance and exit points, and the front row of the theater is reserved for the actors to watch the play within a play. One can only imagine how the person sitting behind Queen Elizabeth must’ve felt trying to peer over her awning of a headdress.

Costume Designer Elizabeth Weiss, who also serves as hair and makeup designer (and as Queen Elizabeth with a perfectly farcical tone, monarchical cackle, and hoop skirt that looks like the big top circus), knows how to round out a stage with nothing more than clothing, makeup, and either hair or well-chosen wigs. Sound Designer and Director Bruce Hirsch creates the depth of the environment, using sound brilliantly. Two cubes, cool colored light, and the sound of bubbling water create the atmosphere of rowing on a lake so perfectly that you can picture the hazy twilight scene with nothing else. Lighting Designer Marc Wright provides atmosphere throughout, shifting the set into a different time of day or location with an abundance of color changes. Every interlude has music that is friendly and festive, and sometimes ominous.

Choreographer Vanessa Bisbee Markowitz does a lovely job of creating a simple yet dynamic dance that serves as the first meeting of Shakespeare and Viola. Everyone was able to follow the steps in this period-accurate dance, a credit to Bisbee Markowitz and her trademark educational style. Intimacy Coach Helen Aberger served an important role, given the romance and (shhh) sex present in the show. Andie Allison did a fine job with properties.

Now, on to the main attraction: the performances. As Shakespeare, Christopher Martin developed a character who begins as uninspired, bored, and surly. He resents the lack of talent around him while also aware that he is producing nothing. Martin is a delight, bringing genuine boyhood infatuation into the character so naturally that by the end of Act I, my face hurt from smiling at his joy. He brings equal heartache and shame to Act 2, when he realizes that his playful games have dire consequences. His physical comedy, crispy voice, connection to other actors, and character arc make him what a lead should be: the heart of the show. He sells it 100%.

Shakespeare’s love interest is the wealthy spitfire named Viola De Lesseps, who longs to be an actor and serves as the mistaken identity gimmick in the show. Played with a consistency of character unmatched in the show, Cecilia Lindgren is poised, playful, sexy, and full of heart. Her chemistry with Martin is tangible, and as you see it take shape, you root for the kiss. Lindgren can communicate with a slight upturn of her lip, a raised eyebrow, and an actual sparkle in her eye. As actor Thomas Kent, Viola’s fake mustache kept coming off, and while it was clearly unintentional, it provided laughs as Lindgren improvised in several ways each time the mustache dangled into her mouth.

One of the most satisfying relationships is that between William Shakespeare and Christopher (Kit) Marlowe, due in no small part to Matthew Ratz. His Marlowe, the Cyrano de Bergerac to Martin’s Shakespeare, is engaged, somewhat mischievous, and earnest without ego. His presence calms the surly Shakespeare and his giving performance allows Martin to shine while also unintentionally shining himself. He took a role that could have been dry and added quirky depth. Brava, Mr. Ratz.

As backer Fennyman, veteran Washington actor Joe Mariano brings his impeccable comic timing with his change purse, moving from histrionic kvetching to his hilarious glee at being given a small part in this play’s debut. His arc from menacing bookie to backstage diva provided the biggest laughs of the night, with Mariano throwing himself into the role as he always does. He evokes vibes of The Office manager Michael Scott, thinking he is the most brilliant actor and practicing his one line as if he is delivering the Gettysburg Address. He chews scenery the way it is meant to be consumed, in huge, delicious bites.

A surprising delight is Cory Estoll as Henslowe, the producer of Shakespeare’s as yet written play. His bumbling, pathetic enthusiasm — exclaiming, “It will all work out in the end!” with a face that looks like he is bracing for a beating — is truly hilarious. His obsession with making sure he provides what he promised to his backer, with lines such as “WHAT ABOUT THE DOG?” garnered huge laughs because Estoll sells it without finding himself amusing. That’s how you do it. Ironically, his optimism proves to be the wisdom in the show, despite his own desperate need to believe his own words. Estoll’s delivery never gets old.

Rivals Richard Burbage (Alex Hyder with some hilarious temper tantrums) and Ned Allen (the inimitable John Van Eck evoking thoughts of John Barrymore as his character follows an arc from conceit to grudging humility) chew that scenery with their fight scene (well choreographed by Bill Dunbar) and serve as the blowhards who come together to work for the greater good: the successful debut of Shakespeare’s Romeo and Juliet.

As Lord Wessex, fiance to the uninterested Viola, Thomas Schiller has a few nice moments as he loses his temper and screams at the other characters. His overall presence is a bit awkward and it is challenging to believe that his Wessex is a powerful, dangerous man. While he is miscast as Wessex, kudos to Schiller for throwing himself into this role with all he has and to Hirsch for bringing out the best in his actors.

Other noteworthy performances: Hamza Elnaggar as Edmund Tilney bursts with angry energy and humorous body language, using his booming voice with dialectical accuracy. No small parts… Naomi Ratz as Nursie to Viola smothers the audience with adorable, matronly concern and nurturing, foiling the foils as she roots for her mistress to follow her heart. Youngest cast member Shreyas Estoll is a dynamo as John Webster, a Juliet wannabe with a lower-class accent and a “told ya so, bruh” attitude. He has chops, and nails comic timing. Great find! The remaining cast members serve anywhere from one to three roles, using their time between scenes to effortlessly conduct scene changes. These ensemble actors play their parts fully, using nonverbal energy to provide the appearance of a full crowd.

Shakespeare in Love had a one-weekend run and will return for two performances only at the end of May (details below). Get thee to a ticket vendor and make time to see this delightful feat of theater.

COVID Safety: With Montgomery County currently in the “low” community level as defined by the CDC, proof of vaccination and masks will no longer be required at indoor performances at the Arts Barn as of March 21, 2022. Staff and visitors may wear masks at their own discretion. 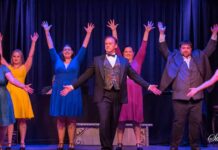 A fitting celebration of ‘Sondheim’ at Fauquier Community Theatre