After a two-year pandemic delay, the highly anticipated revival of David Mamet’s American Buffalo is back on Broadway with a multi-award-winning all-star cast for a strictly limited engagement at Circle in the Square Theatre. The scathing 1975 dark comedy, which made its Broadway debut in 1977, is, in the Pulitzer Prize-winning playwright’s signature style, foul-mouthed, politically incorrect, and explosively violent, as it exposes the obvious desperation, insecurity, and damage, along with the strange camaraderie and humanity, that lie beneath the surface of over-the-top toxic masculinity.

The rapid-fire no-holds-barred three-hander, brilliantly directed by Neil Pepe and consummately performed by Laurence Fishburne, Sam Rockwell, and Darren Criss, is set on a Friday in Don’s Resale Shop, where three underdogs of our American social structure come to blows while plotting a petty crime. When the junkshop’s owner and operator Donny enlists the help of his young gofer Bobby to get back an American Buffalo nickel he thinks he might have undersold to a more knowledgeable coin collector, his card-playing buddy Teach shows up and wants a piece of the action. It all erupts in a ferocious confrontation that tests the honesty, loyalty, and friendship of the small-time grifters and evokes the danger of the eponymous species, known for attacking when provoked and fighting for status within the herd.

All three riotous tour-de-force characterizations embody the underbelly of small business and the underprivileged lives of the working class, excluded from the American Dream by birth and circumstances, and trying to get ahead any way they know how. Driven by unabated rage, Rockwell’s paranoid and venomous Teach spews non-stop nonsensical racist, sexist, and homophobic slurs, insults and attacks the inexperienced Bobby, and challenges Donny, while adamantly pointing his finger, frenetically moving around the space, toying with the objects, and hurling them in a fit of rage, in a portrayal that is at once outrageously laughable and frighteningly furious (with unnerving fight direction by J. David Brimmer).

Fishburne’s Donny is more controlled and mature, taking Bobby under his wing, giving him money, and trying to teach him the life lessons he’s learned (eat breakfast, don’t smoke, it’s all about action), while angry and authoritative in his plan to retrieve the coin, and ultimately unsure of who can be trusted. And Criss brings full-out affecting empathy to the role of the slow and inarticulate Bobby, who never quite gets it right, rarely completes a sentence, but does his best to make up for his mistakes with irresistible puppy-dog charm and unspoken affection. In the end, it’s abundantly clear to the audience that this whole mess could have been easily avoided, if they had only . . . But they didn’t, and they probably never will. In the word of Bobby, “Because.”

The superb cast is supported by a top-notch artistic design that fits the characters, era, and comedy to a tee. Scott Pask’s set is overflowing with an array of discarded items and dusty collectibles hanging from the ceiling, all around the floor, and covering the furniture, which are put to bad use by Treat. Tyler Micoleau’s lighting contributes to the sardonic laughs as Treat and Donny react to the flashing lights of a police car outside. And Dede Ayite’s costumes capture the risible look and questionable taste of the ‘70s, with a distinctive style suited to each of the characters, including the garish plaid pants, pink woven polo shirt, and gold chain necklace worn by Treat.

In the still timely American Buffalo, written nearly a half-century ago, the ever-audacious Mamet makes sidesplitting use of brazen language, behavior, and humor, loaded with insightful psychological undercurrents, to criticize the failures of capitalism, too often overcompensated for by the unbridled hostility, crime, and machismo of society’s throw-aways. It’s a message that is delivered to perfection by the cast and team of this stellar Broadway revival.

Running Time: Approximately one hour and 35 minutes, including an intermission. 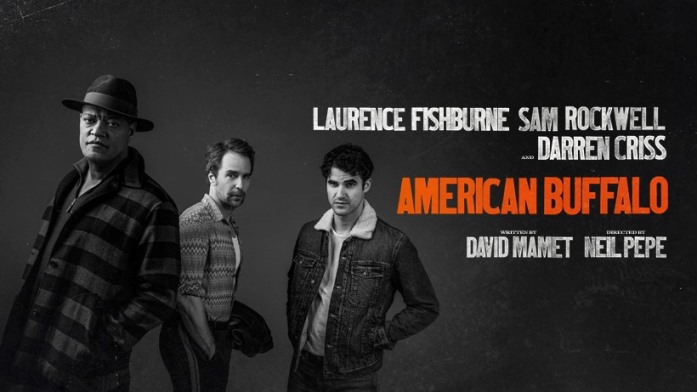