Woolly Mammoth’s upcoming 2022/23 season is a break-out collection of unconventional storytelling, filled with characters who upend roles, rules, and regimes, and authentic, in-your-face playwriting voices. With a world premiere, a US premiere, and four regional premieres, Woolly’s 43rd season is a rallying cry for audiences to break old routines and step into the new.

“To me, ‘Woolly’ is not just an adjective for a Mammoth,” shares Maria Manuela Goyanes, Artistic Director. “To be ‘Woolly’ is to be attracted to a kind of theatrical experience that pushes, exhilarates, and challenges you; it is an experience that can be messy, funny, sometimes dark, and always extraordinarily human. This season is meant to break us out of our shells and see the world with new eyes. As we re-learn how to come together as a community, we invite you to come be Woolly with us!” 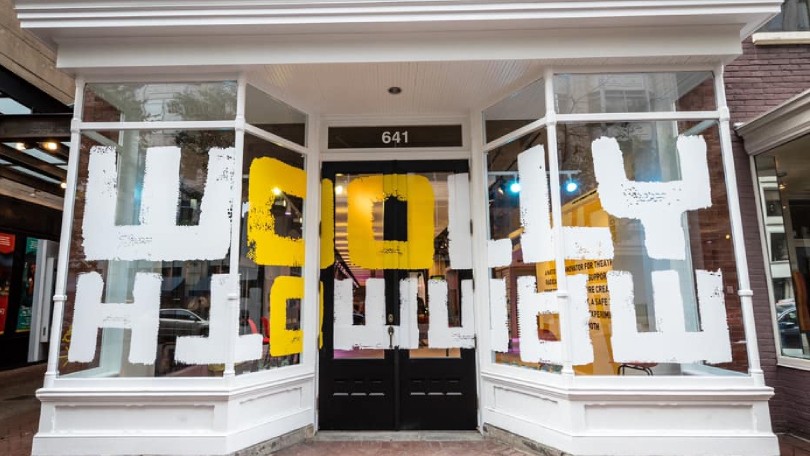 This September, Season 43 begins with Ain’t No Mo’, Jordan E. Cooper’s “fierce and funny” (Variety) exploration of how Black lives are valued — or not — in America. News breaks that Black Americans are offered a one-way ticket to Africa, and Cooper highlights a multitude of outrageous and shocking moments between President Obama’s election through this mass exodus. This production is directed by Lili-Anne Brown (Goodman Theatre’s Lottery Days, LaJolla Playhouse’s Put Your House in Order). The cast includes Woolly company members Shannon Dorsey (Fairview) and Jon Hudson Odom (An Octoroon).

Things get real during the holiday season with Is This A Room, the true story of Air Force intelligence specialist Reality Winner, who breaks rank to share evidence of Russian interference in the US election. Coming to Woolly after a celebrated Broadway run, this “electrifying” (New York Magazine) play was conceived and directed by Obie Award-winner Tina Satter with the acclaimed ensemble Half Straddle. Based on FBI transcripts of their interrogation of Reality, Is This A Room is a “scintillating, gut-grabbing” (The Washington Post) thriller.

2023 resolution: go viral and break the internet. Woolly dives into the turbulent Twitterverse as it presents, in association with The Public Theater’s Under the Radar festival, the US premiere of the Royal Court Theatre’s production of Seven Methods Of Killing Kylie Jenner. Milli Bhatia directs this Gen Z take on “keeping up” with social media, cancel culture, and the various forms of cultural appropriation by award-winning, first-time playwright Jasmine Lee-Jones.

Woolly teams up with Shakespeare Theatre Company in March 2023 to present The Jungle at Sidney Harman Hall. Written by Joe Murphy and Joe Robertson, who spent seven months running a theatre in a French refugee camp, this testament to the human spirit makes its DC debut after West End and New York sold-out runs. Produced by St. Ann’s Warehouse and Good Chance Theatre, and co-directed by Tony-winner Stephen Daldry (An Inspector Calls, The Crown) and Justin Martin, The Jungle asks how to break bread in a place everyone wants to leave.

Also in Spring 2023 comes The Nosebleed, playwright and director Aya Ogawa’s witty autobiographical exploration of childhood, parenthood, and the exasperating gulf in between. Ogawa confronts the cultural challenges faced by immigrant families trying to fit in, and asks: Are parental failures and toxicity hereditary, or just a bad break? This New York Times Critics’ Pick is an invitation to move through mistakes and vulnerability, and on to healing.

Woolly closes out the 2022-2023 season with the world premiere of Incendiary, directed by Monty Cole. Playwright Dave Harris (recipient of the Kennedy Center’s Lorraine Hansberry Playwriting Award) turns a fearless eye towards generational love and violence in Black families to show how far a mother will go to break her son free from death row.

WHERE WE BELONG NATIONAL TOUR

Woolly’s national tour, in association with Folger Shakespeare Library, of Where We Belong, continues to crisscross the country. Directed by Mei Ann Teo, Madeline Sayet’s insightful solo show explores her personal journey to England, echoing that of her Native ancestors, and asks audiences to consider what it means to belong in an increasingly globalized world. Visit Broadway & Beyond Theatricals for tour information.

Golden Tickets provide extraordinary access to Woolly’s 2022/23 season. One Golden Ticket is priced at $365, with a limited number available at a more accessible price of $229. The Golden Ticket offers a seat to any project Woolly does during the 2022-2023 season — with the exception of The Jungle — on any date, in any seat, for as many times as desired (subject to availability). Golden Ticket holders receive priority access to purchase tickets for The Jungle.

Golden Tickets for the 2022/23 season can be purchased online at woollymammoth.net, by phone at (202) 393-3939, or via email at tickets@woollymammoth.net. Single tickets will go on sale in August.

It’s the final boarding call for African American Airlines’ Flight 1619 to Africa, and every Black person in the United States gets a free ticket. In a kaleidoscope of scenes capturing the moments surrounding this outrageous departure, Jordan E. Cooper’s vibrant, no-holds-barred comedy examines the lives of Black Americans in the aftermath of the election of a Black president – and hurtling toward the point of no return. Ain’t No Mo’ is “…thrilling, bewildering, campy, shrewd, mortifying, scary, devastating, and deep” (The New York Times).

IS THIS A ROOM
By special arrangement with Dori Berinstein, Sally Horchow, and Matt Ross; Half Straddle; and Vineyard Theatre
Conceived and directed by Tina Satter
Regional Premiere
November-December, 2022

A thrilling true story. On June 3rd, 2017, 25-year-old former Air Force intelligence specialist Reality Winner is confronted at her front door by two FBI agents. Their conversation ricochets between the casual and the caustic before Reality is taken into custody and charged with leaking evidence of Russian interference in U.S. elections. Using the actual FBI transcript of the interrogation, Obie Award-winner Tina Satter repeats the gripping drama that unfolded between witty Reality and the agents who question her.

SEVEN METHODS OF KILLING KYLIE JENNER
The Royal Court Theatre production
Presented in association with The Public Theater’s Under the Radar Festival
By Jasmine Lee Jones
Directed by Milli Bhatia
US Premiere
February-March, 2023

When Forbes Magazine declares Kylie Jenner a “self-made” billionaire, Cleo takes to Twitter to call out white women who co-opt and profit from Black culture. Soon online discourse spills into reality, blurring the tenuous lines between internet personas and who we are IRL. On the internet, actions don’t always speak louder than words.

Welcome to the Jungle: a camp of stateless citizens outside Calais, France, the temporary home for thousands of people searching for refuge, forced to build a new society from nothing, at the crossroads of cultures and countries. Residents from Syria, Afghanistan, Sudan, and a host of other countries share their stories of loss, fear, community, and hope as they dream of crossing the English Channel to begin a new life. Framed with “poignancy and power” (The New York Times Critic’s Pick), The Jungle is an extraordinary panorama of people suffering and dreaming, surviving and living, coming together in a time of crisis. Woolly teams up with Shakespeare Theatre Company to bring this immersive theatrical experience to DC, in which “theatre shakes hands with the world” (The Sunday Times).

Are we doomed to repeat the mistakes of our parents? Through a series of absurd autobiographical vignettes, Aya Ogawa’s The Nosebleed delves into the sh*t show of parenthood, as both a parent and a child – and what it takes to forgive. A trip to their home country of Japan, a child’s nosebleed, and the hit reality TV show The Bachelor come together in this “wackily funny, psychologically insightful” (The New York Times) theatrical tribute to Ogawa’s father, with surprises like a healing ritual for the audience and a transcendent appearance by a 20th-century icon.

Tanya is a Black mother determined to break her son Eric out of death row — or die trying. She’ll need guns, to get her hair done, and to f*ck some people up. As time ticks towards the fateful date of Eric’s execution (and birthday), the play explodes into a collision of the hilarious and tragic. In this world premiere, playwright Dave Harris harnesses the storytelling techniques of comic books and video games to explore the complexities of generational trauma and daring heroism with his singular, satirical style.

All shows, dates, artists, and prices are subject to change.

Woolly Mammoth creates badass theatre that highlights the stunning, challenging, and tremendous complexity of our world. For over 40 years, Woolly has maintained a high standard of artistic rigor while simultaneously daring to take risks, innovate, and push beyond perceived boundaries. One of the few remaining theatres in the country to maintain a company of artists, Woolly serves an essential research and development role within the American theatre. Plays premiered here have gone on to productions at hundreds of theatres all over the world and have had lasting impacts on the field. Co-led by Artistic Director Maria Manuela Goyanes and Managing Director Emika Abe, Woolly is located in Washington, DC, equidistant from the Capitol and the White House. This unique location influences Woolly’s investment in actively working towards an equitable, participatory, and creative democracy.

Woolly Mammoth stands upon occupied, unceded territory: the ancestral homeland of the Nacotchtank whose descendants belong to the Piscataway peoples. Furthermore, the foundation of this city, and most of the original buildings in Washington, DC, were funded by the sale of enslaved people of African descent and built by their hands.