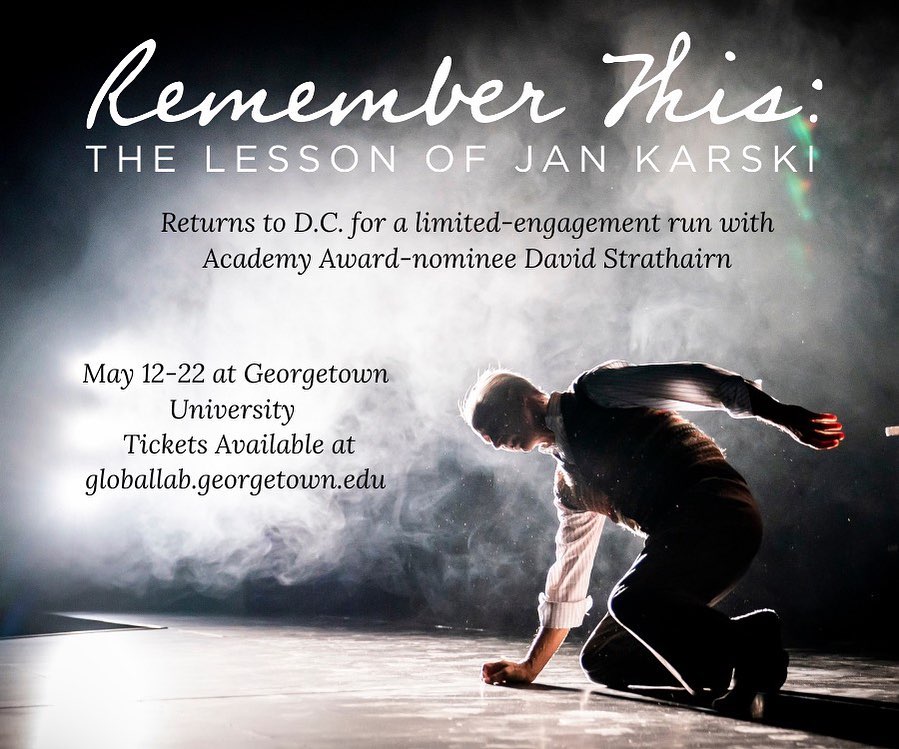 After its acclaimed runs at the Shakespeare Theatre Company and prior to its off-Broadway debut, Remember This: The Lesson of Jan Karski performed by David Strathairn is playing now through May 22, 2022, at Georgetown University’s Gonda Theatre, 149 Old North Way, Washington, DC. Tickets ($40 general admission; $30 seniors; free for Georgetown students, faculty, and staff) are available online.

Below is Susan Galbraith’s rave review of Remember This: The Lesson of Jan Karski when it played at the Shakespeare Theatre Company’s Michael R. Klein Theatre.

A performance of magnitude and nuance: David Strathairn as Jan Karski

I have long contended that all theater in Washington is political. (It’s in the oxygen we breathe.) Few works, however, pack the wallop of Remember This: The Lesson of Jan Karski. The play reminds us of inconvenient truths, challenges us, and offers us the opportunity to transform ourselves through the experience of theater. This is due in great part to the stellar, incredibly moving performance of David Strathairn.

Strathairn is recognized as an award-winning star in film and television, best known for his turn as Edward Morrow in Good Night and Good Luck. On stage at Shakespeare Theatre (in the newly renamed Michael R. Klein Theatre space), he demonstrates how a live performance can be more powerful than anything on film or television. Strathairn is an actor of remarkable gifts with a facility for mimicry including accents, the ability to craft a performance with equal parts physical control and expressiveness, and the emotional fearlessness to plumb the terrifying recesses of the human experience. His well-tuned body puts many actors to shame, but he also brings great nuance and vocal musicality to the role. He brings both the man Karski and his worlds on both sides of the Atlantic alive.

Jan Karski, who was born in 1914 in Poland, got involved with his country’s underground resistance. In Karski’s words, he wanted to learn as many languages as possible so that he could prepare for whichever power tramped across and took control of his country. He became a witness and a courier, carrying some of the most brutal aspects of the Nazi plan for Polish Jews to his country’s leadership in exile and to Polish allies.

His story reminds me of another Polish man from the same period, Stefan Korbonski, who also made an enormous contribution to the cause against the Nazis, leading the Warsaw Uprising. Like Karski, Korbonksi and his wife Sophia also made their home in Washington, DC, after the war. They were neighbors, and I learned over the years the high esteem Polish people had for him by the many pilgrimages to his door. From popes to students of history and literature (reams of poetry were written to honor him). “You are a true hero!” I said after I’d learned some of his history. “Oh,” he scoffed. “We Poles, that’s all we know how to be.” He had been fighting for Poland against enemies of his country from the time he was eight.

Would Karski consider himself a hero? Is bearing witness enough? And how are you meant to act once you know? These are some of the questions the play asks.

The script, largely taken from transcripts by or about Karski, is by Clark Young and Derek Goldman. It is written in the genre of theater of witness or testimony, a style of theater Goldman specializes in both as writer and as producing director of the Laboratory for Global Performance and Politics at Georgetown University. Goldman also serves as director on this project. The work has been a labor of love and dedication by the team in its seven years of development, during which time it went from being peopled by a large cast, suggesting a seminar Karski might have led at Georgetown University for his students after the war to a one-man show.

This kind of theater benefits from being spare. A sturdy wooden kitchen table and two chairs comprise the set. However, the work is anything but static: the chair becomes a moving train from which Karski leaps, a torture chamber, a hospital bed, and, much later, the Oval Office in the White House. Wherever he went, Karski forced himself to witness, steeling himself to stay emotionless, like a camera or tape recorder recounting the ghettos and death camps, the goal of which was the extermination of all Jews.

The play also benefits greatly from having a framework, a prologue and epilogue that bring everything into the present as the actor steps out of character to address the audience directly: “We see this, don’t we? What do we do?”  What do we do when we witness or are told things that are difficult or painful going on around us? Human beings, he reminds us, have an infinite capacity to ignore things that are not convenient.

Clark and Goldman never let us off the hook.  This is not just about the Holocaust but about those things still happening today in our midst.

Early on in the play, we see a clip of the man Jan Karski much later, who was interviewed as part of a much larger film on the history of the Holocaust, Shoah. The real Karski caught on screen breaks down, something the fighter-turned-courier never allowed himself to do in his work, tapping into the deep well of sorrow and horror.

A performance of this magnitude and nuance is all in the details. One I caught is the way Strathairn portrays putting on and off his maroon-brown shoes. They are made from sturdy and well-polished leather and worn, as do so many European men, narrow and slightly too tight. They become excruciating as Karski must walk across Europe, at one point one hundred miles, back to Warsaw to escape.

I also noted how such political theater can etch deeply into capturing familiar places, in this case, our shared space of Washington, which is very satisfying. One of the strongest moments of the play is when Karski gets an audience with President Franklin Delano Roosevelt in the White House. Here at last is the great world leader who has the power to stop the atrocities in Europe. But it seems FDR can’t or won’t fathom the scale of the murders. It seems no one in the outside world chose to understand. Karski insists they all knew. Strathairn describes how his character leaves the White House and walks to Lafayette Park to process this. The walk, the shame in the failure. Many of us in the audience who know the landscape so well let out an audible gasp. Another American “hero” in FDR bites the dust.

Artistic Director Simon Godwin was on hand to greet us on stage before the show and moderated a lively panel afterward with the actor and playwrights. From his spiky hair and impish grin to the toes of his shoes that curled up, he comes across as an ever-curious, endlessly energetic sprite. Whatever his box of magic tricks, praise be for live theater and for companies like Shakespeare Theater in its courage to invite us back into the transformative space that is theater. Let us wish this and all DC theaters an emergence from COVID into a citywide theatrical renaissance. 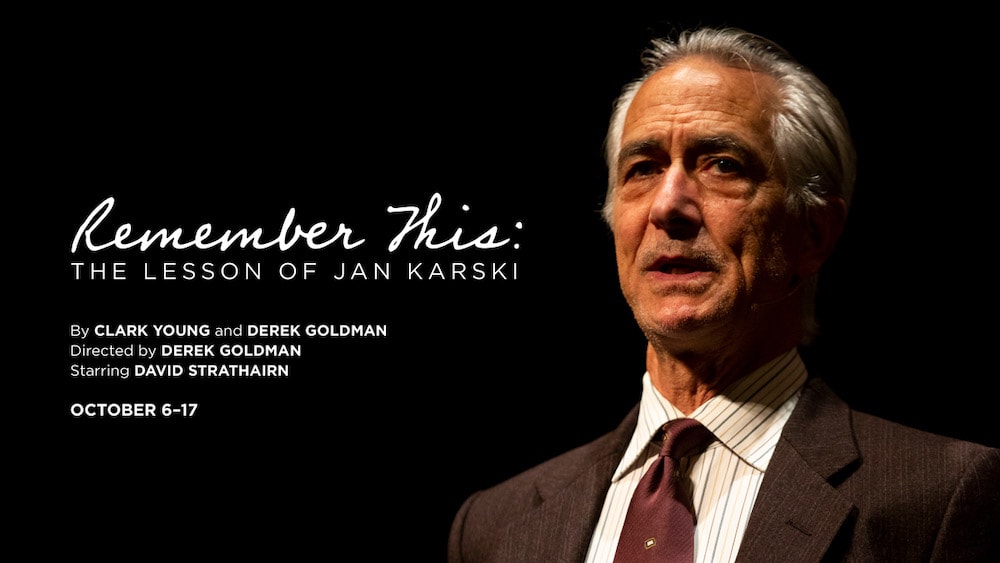 SEE ALSO:
How to be a hero: The lesson of ‘Remember This’ at Shakespeare Theatre column by Sophia Howes
David Strathairn to star at STC as WWII resistance fighter Jan Karski interview feature by Alexandra Bowman
Shakespeare Theatre Company to resume full-capacity shows in September season announcement 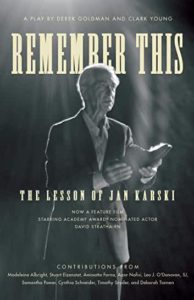