Ever since the attacks of 9/11, the young Tony Valdovinos, living with his family in Phoenix and working with his father in demolition and construction from the age of seven, dreamed of becoming a Marine to serve and to protect his country. As planned, he walked into a recruitment center on his eighteenth birthday, only to be told that he couldn’t enlist because he was an undocumented immigrant – a fact that his parents, who brought him to the US from Mexico at the age of two, had kept from him. So what’s a Dreamer to do?

Now in its NYC debut at Off-Broadway’s New World Stages, ¡Americano!, with book by Michael Barnard, Jonathan Rosenberg, and Fernanda Santos, music and lyrics by singer-songwriter Carrie Rodriguez, and additional lyrics by Barnard and Rosenberg, follows Valdovinos’ real-life journey, from his childhood dream to his ongoing work as a dedicated socio-political activist, serving the only country he’s ever known and loves by turning out the vote, rallying support for representation in government, and advocating for the long-overdue passage of the DREAM Act (Development, Relief, and Education for Alien Minors), first introduced in the Senate in 2001.

Under the direction of Barnard, the ambitious musical unfolds in two distinct acts. The first has a vibrant youthful energy, as we are introduced to Tony, his family, co-workers, schoolmates, and personal dreams; the second takes on a more adult tone, in which politics, patriotism, and militarism are given center stage and evoke a tone of public campaigning. Leading the mostly Latino cast is Sean Ewing as Tony, who brings positivity, determination, understanding, and likeability to his role, as he transitions from innocent hard-working teen to angry disappointed son to charismatic motivated leader, who, despite the unexpected setback, continues the fight for his dream (and that of countless others) of citizenship and service.

Ewing’s empathetic performance is supported by fine featured portrayals of such significant characters in Tony’s life as his domineering father Martin (played with authority by Alex Paez), who evades the truth about his son’s immigrant status; his strong and loving mother Felicitas (the outstanding Johanna Carlisle-Zepeda), who tries to keep the family together; and his studious and awkward American-born brother Fro (the funny Ryan Reyes).

They are joined by his childhood BFF, then girlfriend Ceci (Legna Cedillo), who, like Tony, is determined to join the Marines; his heartrending friend Javi (Pablo Torres), whose drug-dealing gang-member brother Dante (Alessandro J. Lopez) abuses him; Fro’s hopeful first girlfriend Jessica (Carolina Miranda); and the insightful gay dance instructor Joaquin (Lucas Coatney), who takes Tony in as a roommate after the falling out with his father and plays a key role in his relationship with Ceci and his future in political advocacy.

Rounding out the large company are Juan Luis Espinal, Joseph Paul Cavazos, Justin Figueroa, Anne-Lise Koyabe, Robbie Serrano, Megan Elyse Fulmer, Henry Julián Gendron, Lannie Rubio, and Nicole Paloma Sarro (filling in for Yassmin Alers on the date I attended), all contributing to the spirit of the show and its sense of community.

The funny, heartfelt, and engaging narrative is interspersed throughout with 21 exuberant song and dance numbers that combine the sound of Broadway ballads and showtunes with Mexican musical traditions, skillfully performed by the excellent cast and orchestra, with music direction and vocal arrangements by Jonathan Ivie, orchestrations and arrangements by Sergio Mendoza, and choreography by Sergio Mejia. Among the most effulgent and upbeat is the company’s opening number “We Pave the Way,” in a rich and lively Mariachi style, and Carlisle-Zepeda’s emotive powerhouse vocals on “Amor de Madre.”

Transporting sound by Kevin Heard and active lighting by Jamie Roderick enhance the scenes and moods. Costumes by Adriana Diaz, with hair and make-up by Krystal Balleza, define the characters, their occupations, backgrounds, and situations, from the colorful partywear to the devastating beaten appearance of Javi. And Robert Andrew Kovach’s bi-level set transitions efficiently from the tumbledown demolition site to the Valdovinos’ home to the outdoor festivities and rallies.

Though all aspects of the show are well-played and entertaining, the many figures, subplots, and songs don’t always advance the central narrative and could use some tightening (the low-light dream and memory sequences, for example, while playing on the concept of “dreamer,” tend to be redundant and unnecessary, and add to the length of the show, which begins to drag in the second act). And not everyone will agree with Valdovinos’ intertwining of patriotism with militarism. But in general, the message of ¡Americano! is important, inspiring, and resonant, at a time when the US is still engaged in debates over immigration and the DREAM Act is still stalled in Congress. 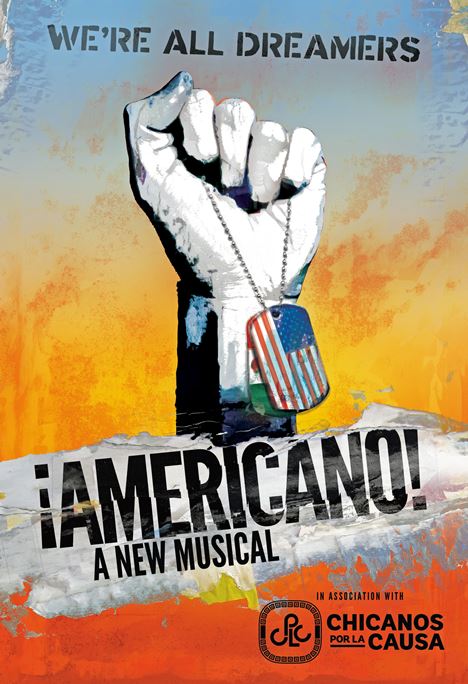